A Saturday opener for Pennsylvania's firearms deer season may not be a permanent addition to the state hunting calendar. 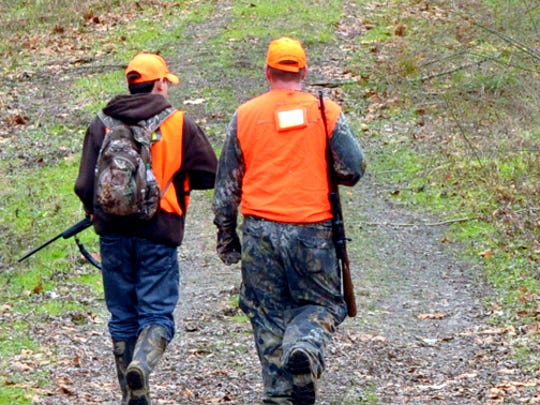 Pennsylvania hunters will experience a Saturday opener for the 2018 firearms deer season. Beyond that, nothing is certain. (Photo: YORK DISPATCH FILE PHOTO)

A Saturday opener for Pennsylvania's firearms deer season may not be a permanent change to the state hunting calendar.

According to a news release from the Pennsylvania Game Commission on Tuesday, the Saturday opener is only a sure thing for the 2019 season. Beyond that, nothing is certain.

Members of the state's Board of Game Commissioners met last week with a pair of state representatives, including one from York County, to discuss the Saturday opener.

The Saturday opener for Pennsylvania's firearms deer season was adopted by the Game Commission board in early April when it set seasons and bag limits for the 2019-20 license year.

That decision was not met with universal approval from the state's hunters.

In fact, hunter concerns over moving to a Saturday opener prompted Gillespie and Kortz to meet with Tim Layton, the president of the Board of Game Commissioners, and some other board members.

While the 2019 deer season will open on Saturday, Nov. 30, Layton, according to a  news release, assured the committee chairmen that officials in the coming year will look very closely at the potential benefits and drawbacks of a Saturday opener. The commissioners will look to see if there’s evidence the Saturday opener increased hunting license sales and hunter success and look to gauge the opinions of hunters who will have taken part in the state’s first Saturday opener in decades.

Layton also said that when the board selects an opening day for the 2020 firearms deer season, it will take all of these findings into consideration to arrive at a decision that  provides the most benefit.

“Acting in the interest of the state’s hunters and the future of hunting in Pennsylvania always are important components to decisions by the Board of Game Commissioners,” Layton said in the news release. “The board gave these factors careful consideration before voting to move the opening day of the firearms deer season to Saturday, and in the coming year, we’ll be drilling even deeper to make sure we understand what the majority of hunters want.”

Since 1963, Pennsylvania’s firearms deer season consistently had opened on the Monday after Thanksgiving, and the state's hunters clearly were split in their support of the change to a Saturday opener. Some who have been unable to hunt on opening day because of work or school commitments strongly supported the change. Some, who travel considerable distances to their hunting spots and now must do so earlier in the holiday weekend, strongly opposed it.

— Information for this story was provided by the Pennsylvania Game Commission.