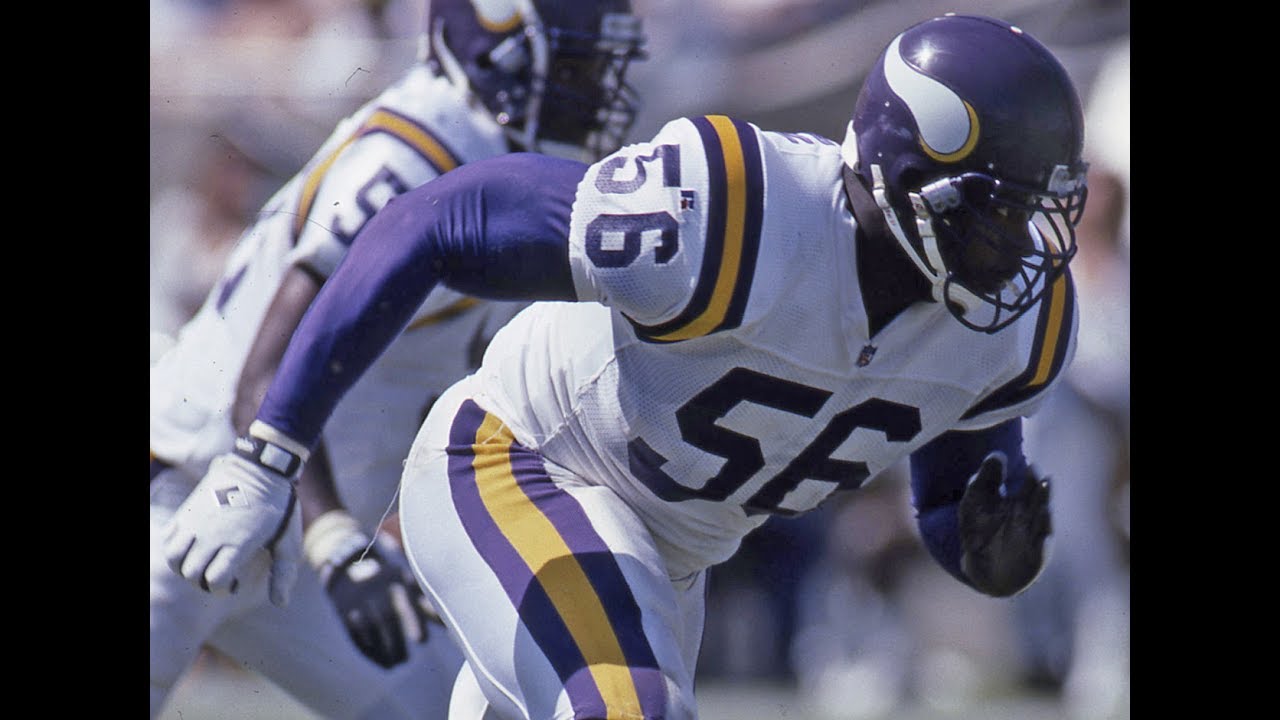 Between the lines, Chris Doleman was a fierce competitor.

A legendary three-sport athlete at York High, Doleman delivered huge hits on the football field, thunderous dunks on the basketball court and smashing kills on the volleyball court.

He was, arguably, the most outstanding athlete in the history of York County sports.

In fact, when The York Dispatch put together a list of the 10 most prominent athletes of the 20th century from both York and Adams counties, Doleman, not surprisingly, made the grade.

After excelling for York High, Doleman went on to football stardom both for the Pitt Panthers in college and for several teams in the NFL, most notably the Minnesota Vikings. His standout defensive abilities, especially as a pass rusher, eventually earned him a bronze bust and a gold jacket as a member of the Pro Football Hall of Fame in 2012.

Wednesday morning, the Hall of Fame and the Vikings announced that Doleman died of brain cancer at the age of 58.

Almost immediately, Yorkers took to social media and began to post their condolences to the Doleman family, while also remembering some of Doleman’s outstanding athletic feats.

In college and as a professional, Doleman became known as a football player. While starring for the Bearcats, however, Doleman excelled in three different sports.

“He was that guy,” Bracey said. “I remember Chris more on the hardwood than I do on the football field. He could play basketball like no other. We were all in awe as high school kids. He was just that athlete that was involved in every sport in high school.”

SOUHAN: Gone too soon, Chris Doleman was much more than just a tremendous football player

Bracey recalled when Doleman received the first White Rose Hall of Fame Award back in 2011. At the time, an honorary sign was placed at Prospect and Lamour streets, naming the street Chris Doleman Street. Doleman grew up on Prospect Street.

“It meant everything to Chris that his hometown, or the town that he adopted as his hometown, remembered him in such a way,” Bracey said.

He wanted to help York's kids: Bracey said she last spoke to Doleman around Thanksgiving. At the time, he told her he wanted to help the kids of York in any way he could.

‘Next time you do something for the kids in York, make sure you let me know,’” Doleman told Bracey. “He wanted to reach back and help the kids and was that role model for them. He felt he had a lot of similarities with the kids in York High and he just wanted them to know that they too could achieve greatness.”

Making him an impact on Stokes: One of the York youngsters that Doleman had an impact on was Tobee Stokes, who was the Bearcats’ starting quarterback in 2019. He met Doleman in 2018.

“I was thinking, ‘Man, this guy came to my school and he’s a hall of famer, so I don’t see why I couldn’t be in the same position one day,” Stokes said.

“You just gotta keep working hard and keep believing in yourself,” Stokes said. “Your dreams can be accomplished if you push yourself.”

Stokes said it’s a message he had heard before from coaches, teachers and parents, but it hit home coming from an NFL great who grew up in York.

“Coaches and teachers can say that, they’re going be the ones to push you, but it does come a little different when you hear from somebody who has been successful in life that has come from the same background you’ve come from,” Stokes said.

High school exploits: Doleman was a key member of a District 3 championship basketball team during his senior year in 1980. During that season, the 6-foot, 4-inch Doleman gained notoriety for helping to limit 7-foot, 1-inch Lebanon superstar Sam Bowie to a career-low 11 points.

Bowie went on to star at Kentucky, helping the Wildcats reach the Final Four. Bowie also made a U.S. Olympic Team in 1980 and played a decade in the NBA during an injury-plagued career.

Former York High athletic director Joe Chiodi witnessed most of Doleman's athletic accomplishments, but he also got to know him on a personal level.

"It was when he was in sixth grade at Jackson Elementary School when I first got to know him," Chiodi said. “Chris had a great sense of humor, he was a good student and a tremendous athlete."

Stephan Bones, a teammate of Doleman's in high school, last saw him "a couple of years ago."

"It was at York High, and he was in a wheelchair at the time.  A lot of us grew up with Chris, and we followed his career," Bones said.

As a football player at York High, Doleman earned all-state recognition at both tight end and defensive end. He was also an outstanding punter.

In basketball, he was a York County all-star center who nearly averaged a triple-double as a senior (13 points, 15 rebounds and seven blocks per game).

During his senior season, he also picked up a new sport in volleyball and he immediately became a standout in that sport, as well, becoming an imposing front-row hitter.

Reach the writers at sports@yorkdispatch.com.