Deshaun Watson couldn’t run, couldn’t hide and couldn’t keep up with the other quarterback on the field, the elusive and talented Lamar Jackson. 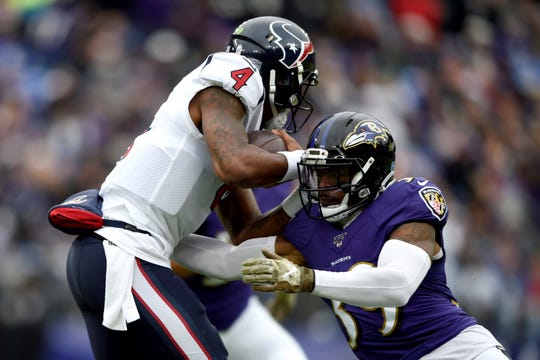 Making matters worse for the Houston Texans: They couldn’t handle the elusive and talented Lamar Jackson.

Jackson threw four touchdown passes and ran for 86 yards to help Baltimore extend its winning streak to six games with a 41-7 rout of the Texans on Sunday.

The game was billed as a matchup between first-place AFC teams and two of the best double-threat quarterbacks in the NFL.

Jackson and the Baltimore defense made it a one-sided affair, and now the Ravens (8-2) are riding their longest winning streak since a seven-game run in 2000, their first Super Bowl season.

“Anytime you are 8-2 you have a special group of guys,” said running back Mark Ingram, who caught two TD passes. “We have a goal of being champions.”

After throwing three touchdown passes to put Baltimore up 21-0 in the third quarter, Jackson followed with his most impressive play of the day: a 39-yard run in which he broke six tackles, weaving through the Houston secondary as if playing keep-away with the football.

Though Jackson didn’t get into the end zone, the jaunt had a striking resemblance to his dazzling 47-yard touchdown run against the Bengals one week earlier.

“That was remarkable. It was incredible,” coach John Harbaugh said of Jackson’s downfield foray against Houston. “I haven’t seen anything quite like it – since last week.”

Ingram said: “He keeps one-upping himself.”

Baltimore defense shines: Watson, on the other hand, spent the entire afternoon running from a defense that utilized a variety of blitzes and coverages. Baltimore rang up seven sacks – six against Watson – forced two turnovers and limited the nimble-footed quarterback to 12 yards rushing on three carries.

“To control Deshaun Watson the way they did was a team effort,” Harbaugh said. “Great job of good, disciplined rush lanes.”

Jackson remained on the sideline after that. With Robert Griffin III taking the snaps, Gus Edwards scored on a 63-yard run with 4:10 left.

And with that, Watson was removed from the game, too.

“It didn’t go our way. They executed, we didn’t execute. That’s it,” Watson said. 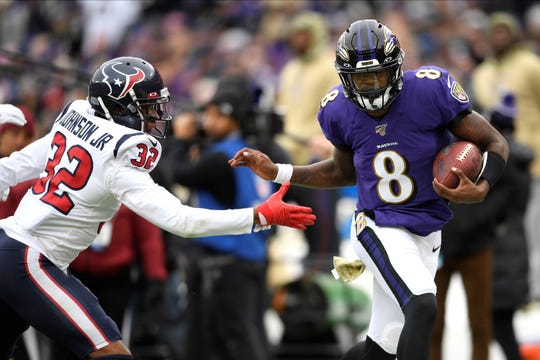 Jackson keeps rolling: Jackson completed 17 of 24 passes for 222 yards. After starting 1 for 6, he completed 13 in a row to turn the game into a rout.

Jackson is the first Ravens player to have two games in a season with at least four touchdown passes. He had five in the opener against Miami.

“I like that stat. I’d rather throw them than run them,” Jackson said.

Ingram caught touchdown passes of 25 and 12 yards in the second half after Seth Roberts and Mark Andrews scored before halftime.

For the season, Jackson has 19 TD passes, five interceptions and a whopping 788 yards rushing.

Rested Texans no match for Ravens: Houston came in with four wins in five games before last week’s bye. The extra rest obviously was of no use in preparing for a strong Ravens team that defeated Seattle and New England during this impressive winning streak.

The Texans failed to score in the first half for the first time this season, generating only 102 yards of offense and yielding four sacks while falling behind 14-0.

Watson lost a fumble on Houston’s opening drive, but Baltimore’s Justin Tucker subsequently hit the right upright with a 43-yard field goal try. It was his first miss in 23 attempts dating to last season.

Later in the quarter, the Ravens were denied a first down on a fake field goal.

Jackson found his groove on Baltimore’s third possession, throwing for 50 yards and running for 12 during a 90-yard march that ended with a 15-yard touchdown pass to Roberts.

“We didn’t start well offensively and it gave (Jackson) time,” O’Brien said. “We didn’t adjust. Once he got going, he got going.”

Mr. 600: With four catches in the first quarter, the 27-year-old Hopkins became the second-youngest player in NFL history to reach 600 receptions for his career. Only Larry Fitzgerald was quicker to 600.

Up next: Houston makes a quick turnaround, hosting Indianapolis on Thursday night in a key AFC South matchup. Baltimore travels across the country to face the Los Angeles Rams on Monday night.