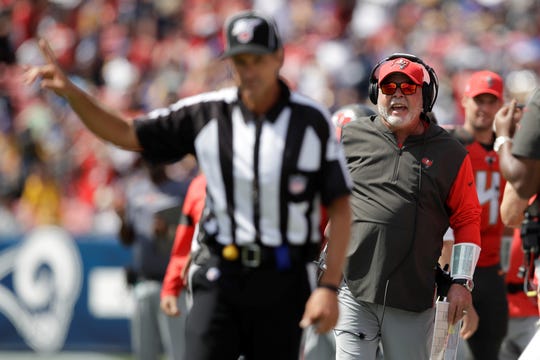 After losing two coaches challenges Sunday during the Tampa Bay Buccaneers’ 31-24 loss to the New Orleans Saints, the York High graduate was fuming.

Both challenges came on plays that could have altered the outcome had Arians won them. One was on a potential New Orleans punt-return fumble that would have given the Bucs the ball deep in Saints territory. The other was on a deep pass to Saints receiver Michael Thomas that Arians challenged for offensive pass interference.

The first challenge came at 2:20 in the first quarter. Saints punt returner Deonte Harris lost the ball when he was wrapped up by the Bucs’ T.J. Logan and fell on Logan, which kept Harris from hitting the turf. As the ball popped out, the Bucs’ Antony Auclair jumped on it and then emerged from a pile of players with it.

Officials ruled that Harris was down by contact, so there was no fumble.

When Arians challenged the call, Auclair was certain the Bucs would get possession.

Though video showed enough evidence to rule the play a fumble, replay officials in New York did not see it that way. The call on the field was upheld, and possession remained with the Saints.

“They blew the call. It’s simple,” Arians said. “It was a clear recovery on the fumble. (Auclair) came running out of the pile with (the ball), and they knew it. … It’s all coming from New York.”

The Bucs regained the ball three plays later on an interception by rookie Sean Murphy-Bunting and scored their first touchdown two plays after that for a 7-3 lead.

“Luckily we get the ball bounce and get the interception and score right there,” Arians said.

Arians’ second challenge occurred on the first play of the second half. Saints quarterback Teddy Bridgewater hit Thomas along the Bucs sideline for a 42-yard gain.

Arians challenged, saying Thomas clearly pushed off on cornerback Vernon Hargreaves. This is the first season pass interference no-calls can be challenged.

This no-call was upheld.

Arians had won both his previous challenges, turning a pair of no-calls into defensive pass interference calls that gave the Bucs automatic first downs.