The Steelers brought some joy to a city that needed it more than ever. Pittsburgh beat the Cleveland Browns 33-18 on Sunday. 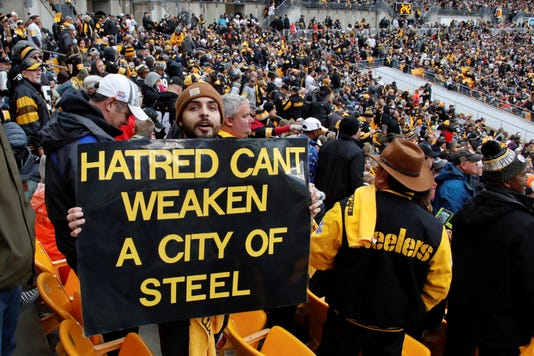 PITTSBURGH — The Steelers brought some joy to a city that needed it more than ever.

The Steelers (4-2-1) overcame a slow start and their own mistakes to win their 15th straight at Heinz Field over the Browns (2-5-1), who have lost 25 consecutive road games – one shy of the NFL record.

The win brought temporary comfort to Pittsburgh’s fans and Western Pennsylvania still in shock a day after a gunman stormed into the Tree of Life Synagogue and killed 11 people. A moment of silence was observed before the game and several signs with the Steelers’ helmet logo – inlaid with a Star of David – were displayed by fans.

“We’re thankful for a victory, but we also understand that there are bigger things,” Roethlisberger said. “There’s life. I’m glad that we could give people maybe three hours of a break of maybe not thinking about it all the time, and that’s what sports does sometimes is it helps you to kind of heal. But it’s over and people are going to celebrate and enjoy this, but reality still sets in for a lot of people.”

Roethlisberger connected on TD passes of 43 and 1 yard with Brown , and Conner continued to minimize Le’Veon Bell’s absence. Conner ran for 60 yards on a 78-yard drive he capped with a 12-yard TD run in the third quarter that put the Steelers ahead 23-12.

“Today was much bigger than a game of football,” said Conner, who played at Pitt before joining the Steelers and ran for 146 yards Sunday. “It was good that we got the win to try and uplift some spirits and vibes of everybody in our city. It’s really a tragedy. Our city took a hit and our hearts are with all of the victims and their families. We still have those in mind.”

Rookie quarterback Baker Mayfield threw a pair of TD passes, but the Browns squandered some early scoring chances and remain winless in Pittsburgh since 2003.

The loss will put further heat on embattled Browns coach Hue Jackson, who dropped to 3-36-1 in two-plus seasons.

“It’s disheartening,” Jackson said. “We’ve got work to do.”

The Steelers then committed three penalties – roughing the passer, interference and holding – to give Cleveland a first down at the 1. On the next play, Mayfield avoided pressure and lofted his scoring pass to rookie Antonio Callaway, who caught it despite being held to pull the Browns within 16-12.

But with the momentum in Cleveland’s favor, Pittsburgh grabbed control of the game and in turn soothed some pain after Saturday’s stunning shooting.

“We have a lot of healing to do,” said defensive tackle Cameron Heyward. “Our city can overcome this, but everybody’s gotta love and care. We’ll continue to do our part. I know everybody in this locker room cares so much for everybody that was involved in that and we’re going to continue to care.”

Conner, who has filled in while Bell holds out in a contract dispute, ripped off runs of 30 and 16 yards and then broke several tackles on his scoring run.

Roethlisberger’s second TD pass with 8 seconds to go in the first half put the Steelers ahead 14-6, and left the Browns thinking about settling for Greg Joseph field goals and not getting touchdowns.

Pittsburgh gambled by going on fourth-and-1 at the 4 on the previous play before Roethlisberger drilled his pass to Brown, who lined up wide and came back toward his QB to make the catch and step into the end zone. The score completed an 87-yard drive that ate up 7:12 and included the Steelers maintaining possession after Roethlisberger appeared to fumble before replay review showed his knee was down.

The Steelers started slowly, failing to get a first down in the first quarter when they were outgained 119-16.

But the Browns failed to score a touchdown on three trips inside the Pittsburgh 27-yard line, and after Joseph missed a 41-yard field-goal attempt that would have put Cleveland ahead 9-0, Pittsburgh pounced.

Roethlisberger’s pump fake fooled Browns rookie cornerback Denzel Ward, allowing Brown to get behind him down the left sideline, and Roethlisberger made an easy throw to his favorite target.

Moving up: Roethlisberger’s second TD pass to Brown moved him past Hall of Famer Fran Tarkenton (342) on the career list. Eli Manning (346) is seventh. Peyton Manning holds the record with 539 TD passes.

Dynamic duo: Roethlisberger and Brown have combined for 67 TDs, tied for seventh most in league history. Peyton Manning and Reggie Wayne also had 67 scores.

Injuries: Steelers CB Coty Sensabaugh left with a foot injury in the second half. Brown RB Duke Johnson injured his leg while running after a screen pass on the game’s second play and was ineffective afterward.

Up next: The Steelers visit Baltimore on Nov. 4. The Browns host Kansas City on Nov. 4.