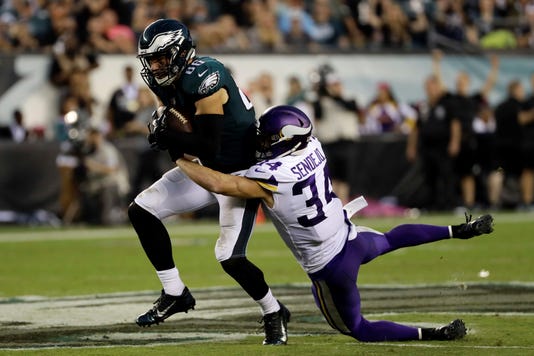 PHILADELPHIA – Linval Joseph whipped out the sunglasses, sat on the bench and pulled on the oxygen mask .

Kirk Cousins threw for 301 yards and one touchdown, the 330-pound Joseph returned a fumble 64 yards for a score and the Minnesota Vikings beat the Philadelphia Eagles 23-21 Sunday in a rematch of last season’s NFC championship game.

“I love seeing Linval on the sideline in his glasses after plays. They have a lot of fun,” Cousins said.

Carson Wentz and the rest of Philadelphia’s offense again struggled as the defending Super Bowl champions fell to 2-3.

Nick Foles led the Eagles to a 38-7 rout over Case Keenum and Minnesota’s top-ranked defense in the title game on his way to earning MVP honors against New England.

Trying to rally from a 17-point deficit midway through the third quarter, the Eagles were set up to take the lead after Roc Thomas dropped a backward pass and Nigel Bradham recovered the fumble at the Vikings 30 in the fourth quarter. But Wentz was called for intentional grounding and coach Doug Pederson elected not to let Jake Elliott try a 58-yarder.

“We were in great position and we go backward,” Wentz said. “It’s frustrating.”

Wentz fired a 7-yard TD pass to Zach Ertz to cut it to 23-21 with 1:09 left but Adam Thielen recovered the onside kick.

The Vikings (2-2-1) got an excellent performance from Cousins, who completed 30 of 37 passes, to avoid falling further behind in the NFC North.

“The pressure keeps building because we know what kind of team we could have if we can overcome some of the things we’ve been doing,” Vikings coach Mike Zimmer said. “There was a lot of pressure to come in here and get a win. They studied hard, came out and worked their rear ends off.”

“Credit to Coach Flip for being aggressive as a play caller, giving us a chance,” Cousins said.

Joseph snatched Wentz’s fumble out of the air and rumbled the distance to give the Vikings a 10-3 lead in the second quarter. Stephen Weatherly knocked the ball loose and Wentz couldn’t recover to catch Joseph from behind after the strip-sack.

After a roughing penalty by Michael Bennett negated his sack, Cousins tossed a 3-yard touchdown pass to Thielen to extend the lead to 17-3 at halftime. Bennett hit Cousins in the upper thigh, held his legs before letting go and Cousins fell backward.

The Eagles finally got going on the opening drive of the third quarter, but Eric Kendricks forced Jay Ajayi to fumble at the Vikings 5 and recovered it. Cousins connected deep with Thielen for 68 yards on the next play and the Vikings reached the Eagles 2 before settling for Bailey’s 22-yard field goal.

Jake Elliott kicked a 30-yarder to tie it at 3-3 after Philadelphia wasted an opportunity inside the red zone. Shelton Gibson made a leaping 48-yard reception at the Vikings 17. But Wendell Smallwood dropped a pass on third-and-3 and the Eagles settled.

Down 20-3, the Eagles had a first down at the Vikings 15, but Wentz took a sack and they ended up kicking a field goal.

Wentz tossed a 12-yard touchdown pass to Wendell Smallwood, who benefited from the NFL’s new catch rule because the ball came loose when he hit the ground. Smallwood then ran in for the 2-point conversion to get Philadelphia within 20-14.

Bennett sat on the bench during the national anthem in protest of racial and social injustice. Bennett stayed in the tunnel during the anthem the first month of the season but already ran onto the field during pregame introductions.

The Eagles were flagged three times for illegal formation.