Former Eagles quarterback Donovan McNabb is among five ex-NFL players that have been accused of sexual misconduct by a former NFL Network staffer. 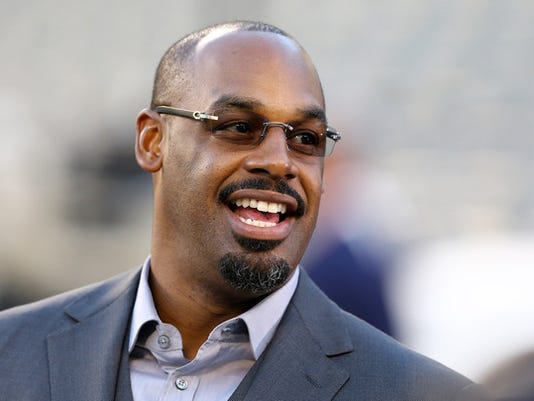 Former Philadelphia Eagles quarterback Donovan McNabb is among six ex-NFL players who have been accused of sexual misconduct by a former NFL Network staffer, and will not appear on ESPN while that network investigates the claims.

In an amended complaint to a wrongful termination lawsuit originally filed in October, Jami Cantor, a wardrobe stylist with the NFL Network from 2006 until October 2016, accused McNabb of texting her explicit comments during his time as an analyst for the network.

The former Eagles quarterback was at the NFL Network from September 2012 until August 2013. McNabb later was fired by Fox Sports after pleading guilty to a DUI offense in 2015. He is now a radio host for ESPN, where he also makes regular appearances on shows such as First Take.

A spokeswoman for ESPN said McNabb “will not appear on our networks” as they investigate the allegations. McNabb did not respond to a request for comment.

The NFL Network has suspended Marshall Faulk, Ike Taylor and Heath Evans — all former NFL players — as it looks into the separate incidents of sexual harassment that Cantor alleged in her lawsuit. Former NFL Network analyst Warren Sapp, fired by the network in 2015 after having been arrested for soliciting prostitution, was also named in the lawsuit, as was Eric Davis, who left the NFL Network in 2013 and works as an analyst for FS1 and a host on ESPN Radio LA. ESPN said Davis will also not appear on the sports channel’s networks while they investigate.

Bloomberg was first to report the news of the suspensions.

Cantor also alleged that former NFL Network executive Eric Weinberger, now the president of Bill Simmons Media Group, groped her and rubbed his crotch against her. The media company called the allegations “very serious and disturbing” and placed Weinberger on leave indefinitely while it investigates.

The NFL Network declined to comment beyond confirming that it had suspended the former players. Representatives for Faulk, Evans and Taylor did not immediately respond to requests for comment.

The lawsuit is among the most high-profile recent allegations of sexual misconduct in the sports world, but they aren’t the first cases this year. In July, Fox Sports fired executive Jamie Horowitz after claims of sexual misconduct surfaced, and Sportsnet fired former MLB catcher Gregg Zaun after inappropriate workplace behavior surfaced last month.

Last week, Hall of Fame quarterback Warren Moon, who had been working as a radio analyst for the Seattle Seahawks, was accused in a lawsuit of sexual harassment by an assistant at his sports marketing firm.

The latest allegations come as claims of sexual harassment have also been rocking the political, media and Hollywood landscapes, among other workplaces, and the Philadelphia-inspired #MeToo movement was named Time’s “Person of the Year.”