Flacco, Ravens crank up offense in win vs. Lions

Flacco, Ravens crank up offense in win vs. Lions

BALTIMORE — The Baltimore Ravens got another ball-swiping performance from their opportunistic defense, and this time — for a change — the offense also contributed to a significant victory.

Joe Flacco threw for 269 yards and two touchdowns, and the Ravens forced three pivotal turnovers Sunday in a 44-20 win over the Detroit Lions.

Flacco helped Baltimore take a 20-0 halftime lead and directed three scoring drives in the fourth quarter to keep the Ravens in front.

After relying heavily on their defense for much of the season, the Ravens (7-5) finally received an ample boost from the league’s 31st-ranked offense.

Flacco went 23 for 36, Alex Collins ran for 75 yards and two scores, and Baltimore stretched its season-high winning streak to three games with its most complete performance of the season.

“The offense kept answering. That’s what team victories are all about,” coach John Harbaugh said. “It was a team victory across the board.”

Matthew Stafford completed a team-record 20 straight passes in the second half, twice cutting the deficit to a touchdown. But Detroit (6-6) lost a second straight following a three-game winning streak.

“Get within one score, and the bottom falls out,” coach Jim Caldwell said.

Stafford left late in the fourth quarter with a bruised right hand after being stepped on. He went 24 for 29 for 292 yards.

“You know, that’s a really, really good defense we just played,” Stafford said. “We knew it was going to be a tough game and we knew there were going to be times we were going to struggle on offense. We just had to keep trying to plug away.”

Despite getting the Lions within 20-13 and 27-20, Stafford never could quite make up the difference.

“I really felt good about how we responded to them scoring some points in the second half, and we were able to keep getting into the end zone as well,” Flacco said.

“We’ve struggled to get the ball into the end zone at times, so it was really big to get the touchdowns today when we really needed them.”

The Ravens came in with three shutouts and an NFL-best 26 takeaways.

They upped that total to 29 with three huge plays: A strip-sack of Stafford by Eric Weddle that led to a touchdown in the second quarter; a fourth-quarter interception that set up a game-clinching TD run by Collins with four minutes to go; and a 45-yard interception return for a touchdown by Weddle against Jake Rudock with 2:26 remaining.

Baltimore’s third straight victory came at a price. Standout cornerback Jimmy Smith left in the second quarter after hurting his Achilles tendon without being touched. 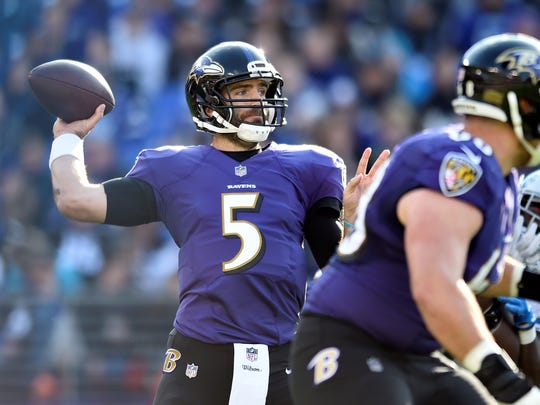 Baltimore Ravens quarterback Joe Flacco throws to a receiver in the first half of an NFL football game against the Detroit Lions, Sunday, Dec. 3, 2017, in Baltimore. (Photo: Gail Burton, AP)

“Looks like Jimmy has a torn Achilles,” Harbaugh said. “That’s tough. It looks like he’ll be out the rest of the year.”

Smith has been bothered by a sore Achilles for much of the season. The seven-year veteran has missed several practices, but started all 12 games and is second on the team with three interceptions.

Prater pulls it: Detroit kicker Matt Prater was wide left on a 43-yard field goal in the second quarter and wide left on a conversion kick after Detroit’s second TD.

Ravens: Smith has battled injuries throughout his career. Only twice has he played 16 games in a season. … LB C.J. Mosley underwent concussion protocol early in the second quarter and was quickly cleared.

Lions: At Tampa Bay on Sunday.