The Tribute to the York US30 Dragway, set for June 15-16, has been dedicated to the memory of Spring Grove’s Karl Nishwitz. 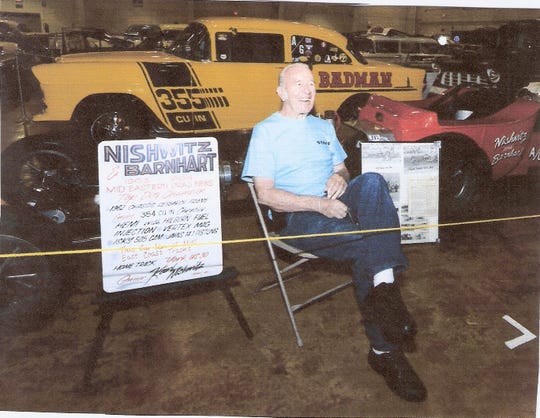 Karl Nishwitz was a well-known member of the local drag-racing community. He died last November at age 84. He will be honored during the Tribute to the York US30 Dragway on June 15-16. (Photo: PHOTO COURTESY OF TRIBUTE TO YORK US30 DRAGWAY)

The local drag-racing community will honor one of its own in June.

The Tribute to the York US30 Dragway, scheduled for the York Airport on Saturday and Sunday, June 15-16, has been dedicated to the memory of Spring Grove’s Karl Nishwitz.

A dedication award will be presented on his behalf to his daughter, Linette Ehrhart, at 2 p.m. Sunday, June 16, during the awards ceremony for the event.

Nishwitz, who died last November at age 84, was a member of the National Hot Rod Association and worked at the York US 30 Dragway for many years, officiating many major events at the facility.

He also volunteered his services to the NHRA at its largest event, the U.S. Nationals, held annually in Indianapolis, Indiana.

The York US30 Dragway was located at the York Airport west of York and operated from 1965 until 1979 under Oscar Hostetter.

The South Penn Hot Rod Council first ran drag races at the airport site on a limited schedule from 1955 until 1959, when promoter Bill Holz assumed the operation of the York site in 1960 and operated it as York US30 Drag-O-Way.

Hostetter then took over in 1965, operating the facility as the York US30 Dragway.

One of the most notable events at the York facility was the Super Stock Nationals, which later became known as “The Woodstock of Drag Racing” because of its large attendance.

The York track became a proving ground for world champion drag racers such as:

►Bill “Grumpy” Jenkins who was technical director of the track went on to become a world champion and national champion on multiple occasions.

►Larry Lombardo, who drove the Jenkins cars and became a world champion in his own right.

The Tribute to the York US30 Dragway will be held from 10 a.m. until 4 p.m. on both June 15 and June 16. Admission will be free, thanks to the National Nostalgia Drag Racing Association and York Aviation.

Reach Steve Heiser at sheiser@yorkdispatch.com. Information for this story was supplied by officials from the Tribute to the York US 30 Dragway.