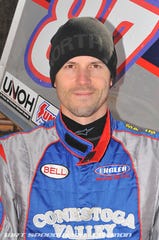 Krimes started second and outgunned pole-sitter Cole Young at the waving of the green flag. He maintained the lead for the entire 25-lap distance, although he never got far from the field.

In the 20-lap 358 sprint-car season opener, defending track champion Troy Wagaman Jr. of Hanover picked up the win. Wagaman also started second and was credited with leading every lap. However, it wasn’t quite as easy as it seems. Second-place finisher Kevin Nouse passed Wagaman on the final set of turns, but Wagaman was able to regain a slim lead at the finish line. Tyler Ross finished third, with Matt Findley and Cody Fletcher in the top five.

Dillsburg’s Anthony Macri led the nonstop feature from the start until the final turn. It marked the second week at a second track that Macri lost the top spot within sight of the checkered flag. Macri finished second, with Brock Zearfoss, Steve Buckwalter and Cale Conley in the top five.

Edkin triumphs at BAPS: Kenny Edkin opened the super-sportsman season with a win at the BAPS Motor Speedway.

Edkin’s win was his ninth career triumph at the Newberrytown oval.

Other events: Williams Grove Speedway was rained out on Friday after all of the rain on Thursday night.

The World of Outlaws weekend in California was also a complete wash out.