West York grad Brett Kinneman was happy with the news that minor league players will receive medical benefits and $400 per week through May 31. 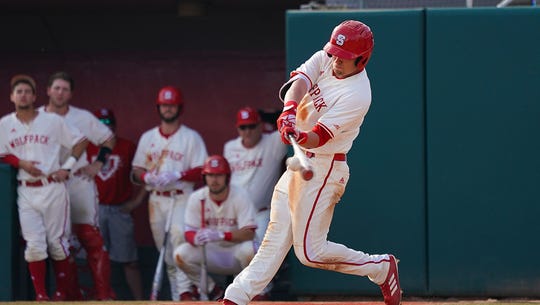 West York High graduate and outfielder in the Pittsburgh Pirates organization Brett Kinneman is shown here during his time at North Carolina State University. Kinneman is one of the minor league players who will receive $400 per week from the MLB through May 31. (Photo: Courtesy of NC State Athletics)

Over the past few weeks, good news in the sports world has been hard to come by.

For West York High School graduate Brett Kinneman, finding a silver lining in his current situation, as an outfielder in the Pittsburgh Pirates organization, is important.

While reaction to the news that minor league players, such as Kinneman, will receive $400 per week and medical benefits through May 31 was mixed, Kinneman sees the payment as a positive, although he would trade the raise for an opportunity to get back on the field.

“I think it’s great,” Kinneman said. “(As) a minor league player that is in the lower levels, I wouldn’t even be making $400 per week if we were playing right now. From a financial side, it’s not a terrible thing, but obviously I would rather be playing.”

Kinneman is currently living with his girlfriend in North Carolina near North Carolina State University, where he was a standout college player. He acknowledged that for players who saw their pay decreased, it’s not an ideal situation, but some pay is better than none.

An unsure future: He wasn’t sure exactly how he would proceed if MLB declined to continue paying players after May 31 because of the lack of job openings and the limitations on going into public because of the coronavirus pandemic.

MLB commissioner Rob Manfred said last week that he hopes the players will prepare to start playing games in May, but the league recently canceled a series of games scheduled to be played in London in June.

Like most athletes, Kinneman is limited to the exercise he can do at home, and that doesn’t involve hitting the ball. He said the Pirates’ coaches have been in contact to provide diet and exercise suggestions based on the player's situation, but position players are behind pitchers in training to return.

“You can go play catch in the street, but you can’t just go whack baseballs down the middle of the street in the neighborhood,” Kinneman said.

MLB draft issues: Another aspect of baseball hit by the suspended season was the upcoming MLB draft. It has been reported that the draft will be cut from the traditional 40 rounds to somewhere in the range of five to 10. For Kinneman, who was drafted in the seventh round in 2018, it doesn’t seem right that the college and high school players are being hurt by a financial and health situation out of their control.

“It’s unfortunate because the amateur guys don’t have anything to do with what’s going on,” Kinneman said. “It kind of seems unfair for the financial kickback to be taken out on the amateur guys. For a lot of people, the draft is an ability to make some life-changing money, and not only that, but the opportunity to play (pro baseball).”

Looking forward: With lots of unexpected and unwanted free time on his hands, Kinneman has come to a realization that leads players to continue the grind of pursuing a pro baseball career — he loves the game. While the financial side is important and something he is concerned about, Kinneman longs for a chance to get back to doing what he loves.

“Just being able to go out and play,” Kinneman said. “Everybody always talks about the financial side and all the things that go into being a minor leaguer that don’t seem glorious, but we are lucky to get to play and be paid to play. Hopefully in a month we’re able to get back to normal and be able to play. I’m looking forward to that day whenever it does come.”