Orioles first baseman Chris Davis and his wife Jill donated $3 million to the University of Maryland Children’s Hospital on Monday. 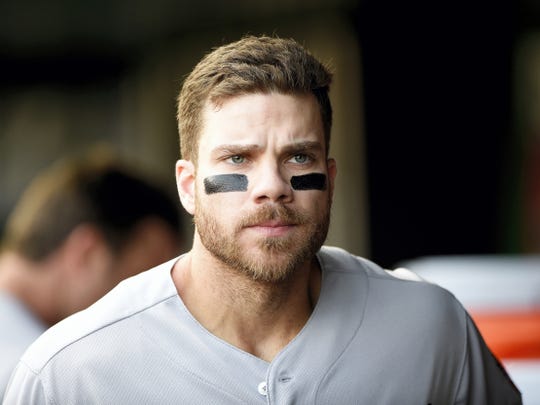 Baltimore Orioles first baseman Chris Davis and his wife Jill donated $3 million to the University of Maryland Children’s Hospital on Monday, the largest gift the hospital has received from a Baltimore sports figure.

The money will be spent on building a state-of-the-art facility described as a hybrid catheterization and operating room to treat children, according to a release.

“This is a cause that is close to our hearts," Chris Davis said in a release. "Everyone at the hospital has inspired our family — from the patients and families who show such courage in the face of overwhelming challenges, to the medical professionals and caregivers who dedicate their careers to saving and improving lives.”

The space will be called the Evelyn Kay Davis Congenital Hybrid Catheterization Suite, named after the Davises’ daughter, Evie, who was born with a ventricular septal defect in January 2018.

The medical center’s president and CEO Mohan Suntha, in a release, said, "this remarkable gift from Chis and Jill Davis will benefit children throughout the state of Maryland beyond.

Jill Davis, a trained pediatric nurse, has spent time volunteering in the NICU at the hospital.

Davis, 33, was the Orioles’ nominee for the Roberto Clemente Award, which recognizes a player’s humanitarian effort, for the third straight season in 2019. The Orioles’ announcement referenced more than 10 organizations that Davis and his wife, Jill, have assisted.

Davis has been with the Orioles since being acquired via a trade with the Texas Rangers in 2011. He signed a seven-year, $161 million contract with Baltimore after the 2015 season. In the first four years of the deal, Davis, a two-time home run champion in his first four full seasons with the Orioles, has hit .198 with a .698 OPS and 745 strikeouts in 2,063 plate appearances. A $42 million portion of the contract will be made in deferred payments from 2023 to 2037.

In 2019, Davis played in only 105 games, his fewest in a full season with the Orioles. He began the year with 33 hitless at-bats and 38 hitless plate appearances, which — paired with a drought to end a 2018 season in which he posted the lowest qualified batting averaged in major league history — gave him records for most consecutive at-bats and plate appearances without a hit.

A three-hit game against the Boston Red Sox on April 13 sparked a month in which Davis hit .290 with a .952 OPS and five home runs in 21 games. But a rainout in New York started another dry spell. Beginning with a May 15 doubleheader against the Yankees through the end of June, Davis posted a .145 average, striking out in 43 of his 90 plate appearances with no home runs.

His up-and-down season continued from there. He took a four-game hitting streak into the All-Star break, having homered twice on the Orioles’ final first-half road trip, before going hitless in his first four games of the second half.

Davis was 0-for-16 with 14 strikeouts on a late-July, West Coast road trip before hitting a game-winning home run against the San Diego Padres on the last game of the trip. From there, he reached base in six straight games before Aug. 7, when manager Brandon Hyde removed him from an eventual loss to the Yankees after the two had a verbal altercation in the dugout. Davis had to be restrained by teammate Mark Trumbo and hitting coach Don Long. He later cited that “hitting a breaking point” prompted his spat with Hyde, saying that he had been frustrated with what he considered defensive mistakes on top of his offensive struggles.

Davis started only 18 of the Orioles’ finally 48 games, though he hit a game-winning home run against the Seattle Mariners in Baltimore’s home finale and also had a go-ahead homer in extra innings against the Toronto Blue Jays during the season’s final road trip. During that season-ending stretch, Davis welcomed 9-year-old Red Sox fan Henry Frasca, who had written Davis a letter of support during his hitless streak, to spend time with the team. He also received the Clemente Award recognition, saying those charitable efforts helped provide perspective throughout a trying time in his career.

Ahead of the Orioles’ final home game, executive vice president/general manager Mike Elias said Davis will be part of the team when it regroups for the 2020 season in spring training in February. Beyond that, though, his status with the team is likely not guaranteed. But Monday’s donation likely means his impact in Baltimore will go far beyond the length of his contract.