Philadelphia Phillies manager Gabe Kapler knows Bryce Harper is struggling. Still, Kapler is sure the team's new slugger will come out of it. 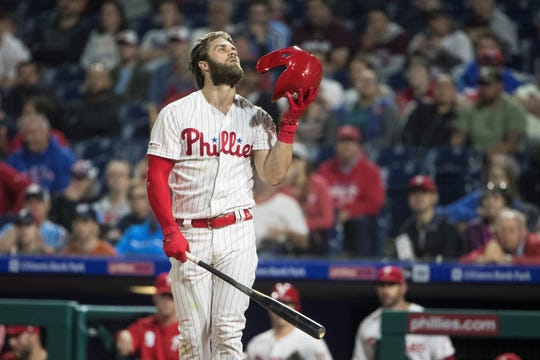 Gabe Kapler had an assignment for the Phillies’ research and development department ahead of Wednesday’s 7-3 win over the Detroit Tigers at Citizens Bank Park.

He wanted an examination of the stars, or, to be more precise, baseball’s superstars.

Bryce Harper was the manager’s motivation. It is no secret that Harper’s first full month with the Phillies did not go exactly as planned. He checked out of April on Tuesday night hitting .240 with eight doubles, six home runs, and 20 RBIs -- numbers that project to roughly 36 home runs and 120 RBIs, which would probably please the masses, including those who booed Harper after he struck out in the eighth inning of that 3-1 loss.

Things did not get better for Harper in the finale of the Phillies’ two-game series against the Tigers, as he went hitless in four at-bats, dropping his average to .231. He did avoid striking out for just the third time in his last 15 games, and he made solid contact most of the night, including in his final at-bat, when he just missed hitting an opposite-field home run.

Harper’s search for answers will continue during the team’s off-day Thursday and when play resumes with the start of a three-game series against the Washington Nationals on Friday night.

Kapler, who watched intently from a distance as Harper took batting practice before Wednesday’s game, said he is not sure why things are going so wrong for Harper.

“Are his mechanics sound right now or perfect? No, they are not,” Kapler said. “There are some things we are looking at and working on.”

Good players have bad stretches: Kapler is sure, however, that Harper’s difficult stretch will end, which was why he requested the superstar research.

“These are Paul Goldschmidt’s numbers from the 25th of April through May 22nd last year: He went 9-for-82 with one home run and 33 strikeouts,” Kapler said.

Those numbers were slightly off, but Goldschmidt did endure a dismal 26-game stretch during Kapler’s time frame, and he still went on to hit .290 with 33 home runs and 83 RBIs for the Arizona Diamonbacks. He finished sixth in the National League MVP voting and signed a six-year deal worth $144 million with St. Louis in the offseason.

“This is not unusual by any stretch,” Kapler said. “It’s a tweak here or a mental adjustment there, and [the great hitters] roll. This is what is going to happen to Bryce Harper. I’m confident in that.”

Kapler need not look beyond his own clubhouse for an example of a star player who has gone through a bad stretch and come out the other side.

Nola trending in right direction: Aaron Nola had his own abysmal start to the season after signing the first big contract of his career in spring training. He started 1-3 with a 7.45 ERA, prompting all sorts of speculation about what was going wrong. He is still not back to the elite Cy Young Award candidate he was last season, but after another strong start against the Tigers on Wednesday, he is trending in the right direction.

“I don’t think this will be his last struggle,” Kapler said about Nola. “But I think he’s past the really early-season struggles that we saw. If his curveball is on, it doesn’t matter who the opposition is. He goes through the best lineups in baseball when his curveball is right, and I think that’s the pitch he just really hasn’t had consistently all season long.”

He had against the Tigers.

“Yeah, it was probably the best it felt all year,” Nola said. “I finally got a few to work, and I felt like I was pretty sharp. I did still throw a couple hanging ones that they hit.”

Five of Nola’s six strikeouts came on curveballs, including three looking. He had hitters jumping off the plate, a sure sign he is nearing his 2018 form. For the second straight start, Nola surrendered just one run. He did allow seven hits in 5 2/3 innings and left after giving up a game-tying bloop single on a curveball. He was fine with a no-decision because the team won.

“Obviously I want to go deeper into the game,” Nola said. “I want to go seven-plus and save the bullpen.”

Nola turns corner, believes Harper will, too: Still, he knows he has turned a corner, and he knew he would. His ERA in his last three starts is 2.50.

“You just know that you can do it,” he said. “I’ve gotten to know myself pretty good over the last couple of years -- what I’m good at, and what I need to work on. Obviously, I started off really slow and definitely not the way I wanted to start. But these last couple of outings I feel like I’ve gotten it back together, and I’m feeling like myself again.”

Nola and Kapler believe the same thing will happen for Bryce Harper.

“We all go through it,” Nola said. “You’re not going to go through a whole baseball season and always be really good. That’s just the way the game is.”

The survivors are the guys who become stars.