Pitcher Aaron Nola and the Philadelphia Phillies have agreed to a $45 million, four-year contract, avoiding a salary arbitration hearing. 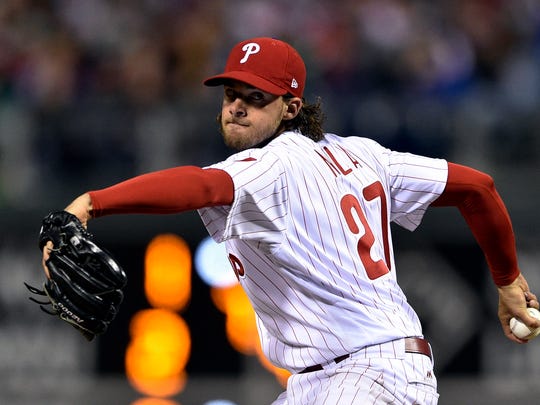 CLEARWATER, Fla. — Pitcher Aaron Nola and the Philadelphia Phillies have agreed to a $45 million, four-year contract, avoiding a salary arbitration hearing scheduled for this week.

The 25-year-old right-hander set career bests last year when he was a first-time All-Star, going 17-6 with a 2.37 ERA. He would have been eligible for free agency after the 2021 season..

“I think Aaron Nola brings a preparation we can all look up to and our other players can emulate,” Phillies manager Gabe Kapler said Wednesday. “I think his between-the-lines competitiveness is off the charts. He’s such a fighter, he’s such a grinder, he’s such a battler.”

Eligible for arbitration for the first time, Nola had asked for a raise from $573,000 to $6.75 million and the Phillies had offered $4.5 million. Nola is to discuss the deal Thursday.

Among the more than 175 players who were eligible for arbitration this year, Nola is the first to get a deal of more than one guaranteed season. Arizona left-hander T.J. MacFarland and Milwaukee catcher Manny Pina agreed to contracts that included 2020 club options.

Arrieta has surgery: Right-hander Jake Arrieta had left knee surgery last month. Kapler described the surgery as minor and said it was a meniscus cleanup with no structural issues.

Kapler said Arrieta already has pitched off a mound and the team expects him to be ready for the regular season.

“We’re just going to be smart about his running and cutting progression,” Kapler said.

Trainer's room: Right-hander Jerad Eickhoff had carpal tunnel surgery on Oct. 1 and recently had a follow-up visit where it was determined he was not a candidate for further surgery. Kapler said Eickhoff will throw a bullpen session next week and be re-evaluated.

“I think he’s had so much adversity over the last 12-18 months,” Kapler said. “He just wants to feel 100 percent so he continues to strive toward that goal.”

Outfielder Aaron Altherr had surgery on his right foot at the end of the season and was immobilized for six weeks. Kapler said Altherr is gradually building toward running and he is expected to be ready for the start of the season.

Seeing both sides: Kapler says he doesn’t have any strong feeling either way on the proposed rule change that will would force a pitcher to face three batters in an inning or get the final out.

“It’s fun to be able to mix and match and use one reliever to come in and get a guy out,” he said. “But if the rule was the same for everybody there are things that would work well for our roster.”

Kapler said that David Robertson and Tommy Hunter are two relievers he thinks can have equal success against righties or lefties.

Third-base battle: Kapler said Maikel Franco and Sean Kingery could be competing to start at third.

“There is some competition at third base,” Kapler said. “And that’s a conversation I’ll have with Maikel and Scott.”