The 2019 York Area Sports Night program is now 2 for 2 in attracting hall of famers. The show's latest announced guest is Andre "The Hawk" Dawson. 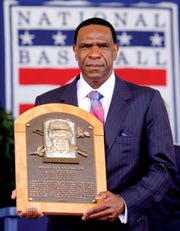 Andre Dawson is shown here during his induction into the Baseball Hall of Fame in 2010. (Photo: ASSOCIATED PRESS FILE PHOTO)

The 2019 York Area Sports Night program is now 2 for 2 in attracting hall-of-fame celebrities.

The show's latest announced guest is Andre "The Hawk" Dawson, who was inducted into the Baseball Hall of Fame in 2010 during his ninth year of eligibility. It's Dawson second appearance at the York show, with the first coming in 1989 when he was a member of the Chicago Cubs.

Dawson, meanwhile, excelled during a major league career that spanned more than two decades, from 1976 through 1996. During that period, he became known as one of the game's best all-around players.

The outfielder was best known as a player with the Montreal Expos and later the Chicago Cubs. At the end of his career, he also had brief stints with the Boston Red Sox and Florida Marlins.

The show: The 55th annual Sports Night show is set for Thursday, April 4, at Heritage Hills Golf Resort and Conference Center. Previously, the show had been held in late January or early February, but was moved this year by organizers in the hopes of getting better weather.

Tickets for the program are $80 in advance and $100 at the door, if available. The public celebrity reception will run from 4 p.m. until 6 p.m. From 6:15 p.m. until 7:45 p.m., there will be an exclusive celebrity dinner with a live auction for celebrities, hosts, sponsors and guests.