The longer former Baltimore Orioles All-Star Mike Mussina waits for his Hall of Fame election, the louder the voices calling to enshrine him get. 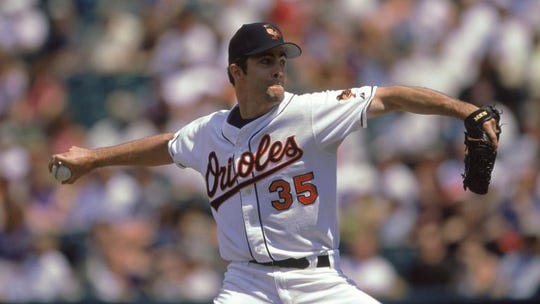 The longer former Baltimore Orioles All-Star Mike Mussina waits for his Hall of Fame election, the louder the voices calling to enshrine him get.

Mussina's candidacy, which might finally earn him induction in Cooperstown, New York, this week when results are revealed Tuesday on MLB Network, is one that has grown in each of his six years on the ballot. And joining the chorus of those saying the time is now for Mussina to have his day includes a pair of MLB Network analysts, Hall of Famer Jim Thome and Kevin Millar.

The ballots cast by baseball writers take into account everything from past statistical precedents and awards to character, sportsmanship and integrity. But those who stood in the batter’s box against Mussina say all that is backed up by a healthy respect and admiration for his talents on the mound.

Vote total has increased: Ever since he first appeared on the ballot in 2014, Mussina has been part of that talk.

That bodes well for Mussina for 2019. Through Sunday, he appeared on 81.1 percent of the 196 known ballots on the online tracker. Those who abstain might look at how he never won a Cy Young Award, six times finishing in the top five and coming in second to Pedro Martínez in 1999. His career 3.68 ERA, in a career spent first with the Orioles and then the New York Yankees, in the difficult American League East is a credit to his candidacy as well, but he never won a World Series ring. So is his 270-153 career record.

Peers support him: None of that matters to the peers who saw him as one of the best in his generation.

“I think as a hitter, you always had to be ready for three to four quality pitches, just tremendous stuff,” Thome said. “You knew you were facing their ace, at the end of the day. … I'll say that the one thing that impressed me the most as a hitter facing him, which is not fun, but which impressed me about him as a pitcher, is he would never get into a pattern where you could sit on pitches. He was so smart how he'd attack you, but the best part was he had the brains of knowing how to pitch, and then he also had the stuff on knowing how to get you out. I think that's what made him great.”

For Thome, that meant pounding him inside with fastballs early in games to get him off the plate and speed him up a bit before switching it up against him.

Millar, who, despite his reverence, hit .400 with eight extra-base hits against Mussina in his career, saw the same things.

“He had command of all of his pitches, he was able to have velocity in his prime and work down in the zone,” Millar said. “When you can throw knee-high 95 mph fastballs, with a devastating knuckle-curveball, which is a rare pitch. ... He was so consistent, too. So when you think ‘Hall of Famer,’ it's doing it for a while and being good for a long time. I don't know what a Hall of Famer really is. It's just an opinion most of the time, and Mike Mussina, in my opinion, is a Hall of Famer.”

Announcement on Tuesday: Tuesday's announcement will tell whether that's confirmed. Mariano Rivera, Roy Halladay and Edgar Martinez all earned votes on over 90 percent of known ballots on the online tracker as of Saturday, and Mussina, who has garnered the fourth-highest percentage of known votes, is scheduled to have a feature on his candidacy on the MLB Network announcement show alongside that trio.

Thome, a first-ballot Hall of Famer in 2018, didn't have to wait the way Mussina has, but understands some of why this particular candidacy has taken a while.

“I think for me, when I look at a player, I try to judge, ‘Is this guy one of the elite? Is he at the top of the game in his era?’ ” Thome said. “That, to me, when I look at Mussina, I look at him in the Pedro [category]. I look at him in that type of category, especially stuff-wise and pitch-wise. And let's not forget durability. I mean, this guy pitched a long time, and had a tremendous career. And then let's not forget this, he pitched in the American League East. That's another compliment to his great career.”