After the worst Orioles season since the franchise moved to Baltimore, the team has decided to clean house, firing Dan Duquette and Buck Showalter

BALTIMORE (AP) — The Baltimore Orioles will continue their rebuilding project without manager Buck Showalter and executive vice president of baseball operations Dan Duquette, who were fired Wednesday after the team finished with the worst record in the major leagues.

With Duquette procuring the talent and Showalter making it work on the field, Baltimore snapped a run of 14 straight losing seasons and made the playoffs in 2012, 2014 and 2016.

The club issued a statement Wednesday night that read, in part: "We thank Dan and Buck for their many contributions over the past several years. Under their leadership, prior to the 2018 season and for six consecutive years, the club delivered competitive teams playing meaningful baseball into September. ... Everyone in Birdland and across our organization will cherish these memories, and we all join in thanking Dan and Buck for their contributions."

Showalter and Duquette have contracts that expire at the end of October.

A three-time AL Manager of the Year, Showalter ranks second on the Orioles' career list with 669 victories, trailing Earl Weaver. He took over in August 2010 and orchestrated the resurgence of a floundering franchise.

Once hailed for making baseball in Baltimore relevant again, the 62-year-old Showalter is out of a job after a season in which the Orioles finished 61 games behind Boston in the AL East.

Before opening day, Duquette signed free agent pitchers Alex Cobb and Andrew Cashner. He also spurned trade offers for pending free agent Manny Machado with hopes that the Orioles could be a contender in 2018.

It never happened. Baltimore went 8-20 in April and owned a 19-50 record on June 16. Just over a month later, before the July 31 non-waiver trade deadline, Duquette tore apart the roster by swapping Machado, Zach Britton, Jonathan Schoop and several other veterans for 15 minor league prospects and international signing bonus slot money. 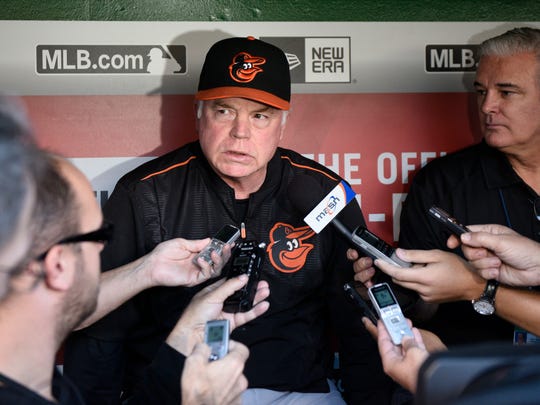 He won't be around to see this rebuild to the finish. Director of Player Development Brian Graham will handle day-to-day oversight of baseball operations while the Orioles search for Duquette's successor.

Showalter earned AL Manager of the Year honors in 2014 after taking the Orioles to the AL East title and a berth in the Championship Series. He was also chosen Manager of Year with the Yankees in 1994 and Texas in 2004. His career record is 1,551-1,517, including 669-684 with Baltimore.

"I just think ever since he came here, the franchise just gained a little more accountability, gained an edge for some time," Orioles outfielder Adam Jones said before the final game of the season. "It's the end of an era. A great manager, a great tenure. I don't know if he's going to coach or manage again, but he's got grandchildren. Go golf. Relax and go sit on the golf course."

Duquette joined the Orioles in November 2011. Baltimore reached the postseason in 2012, the first of five successive seasons in which Baltimore finished at least .500.

Duquette's tenure in Baltimore featured the crafty signing of free agents Nelson Cruz and Mark Trumbo, both of whom led the majors in home runs with the Orioles. But Duquette also signed right-hander Ubaldo Jimenez, who went 32-42 over the length of a four-year, $50 million contract, and Baltimore is still paying the price for the seven-year, $161 million deal offered to slugger Chris Davis before the 2016 season.

Davis batted .168 this season, the lowest batting average by a qualifier in major league history, and he struck out 192 times over 128 games.

Duquette replaced Andy MacPhail as Baltimore's overseer of baseball operations. Before that, the 60-year-old Massachusetts native enjoyed successful tenures with the Boston Red Sox from 1994-2001 and the Montreal Expos from 1987-93. The Red Sox reached the playoffs three times under his guidance.

The Orioles say they will hire an executive from outside of the organization to lead the baseball operations department. That person will be in charge of choosing a new manager.