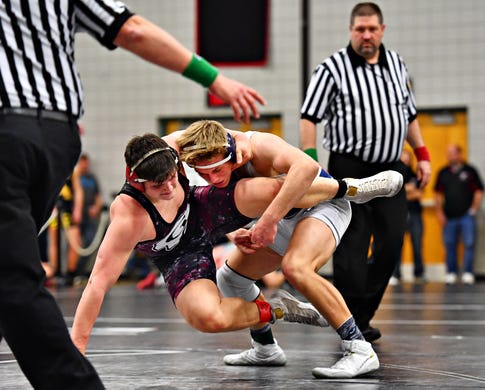 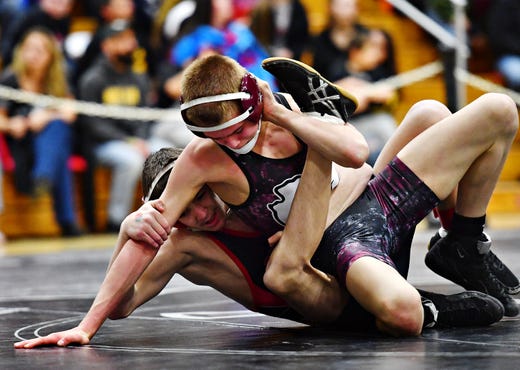 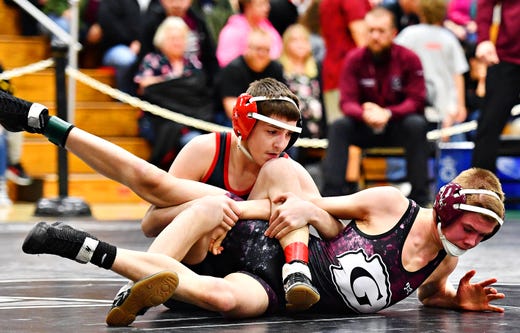 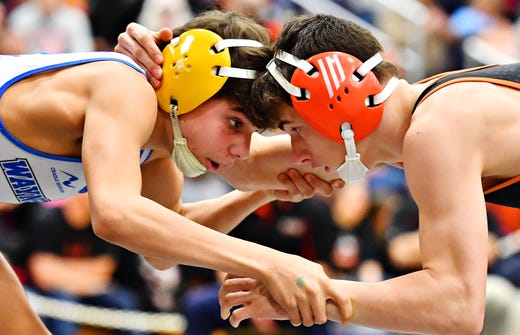 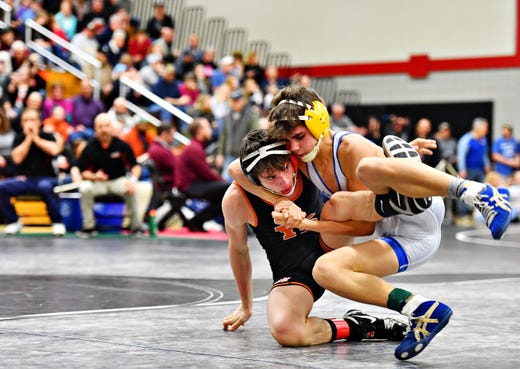 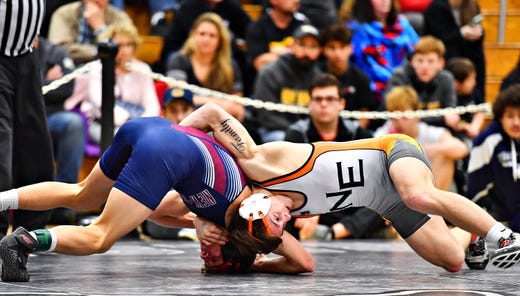 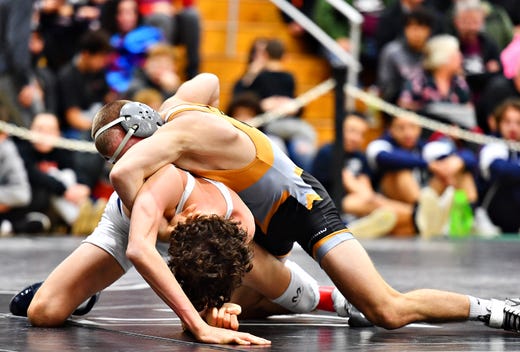 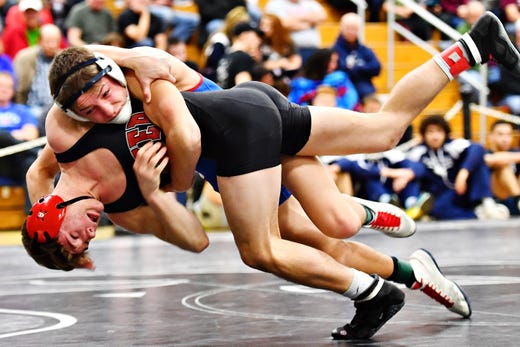 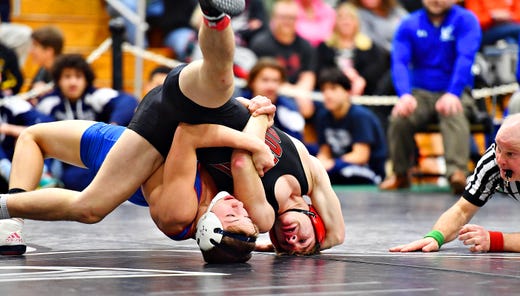 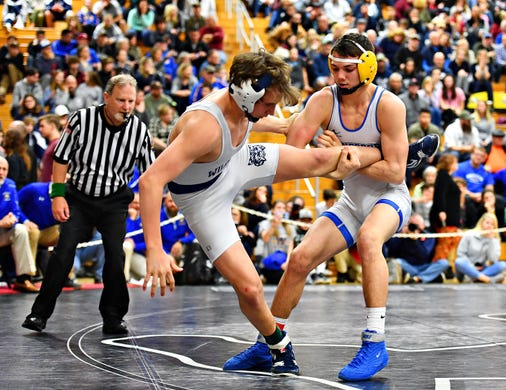 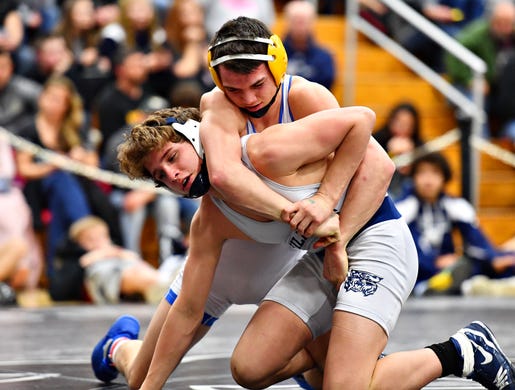 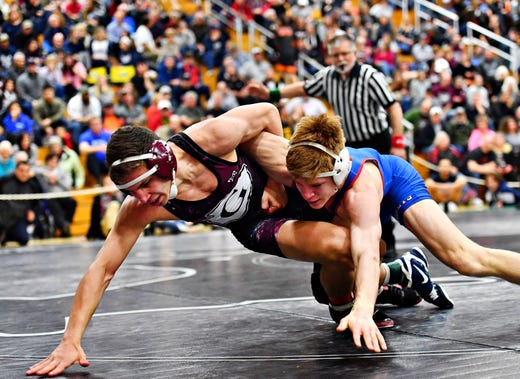 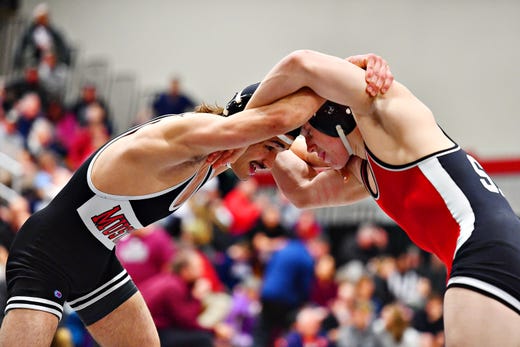 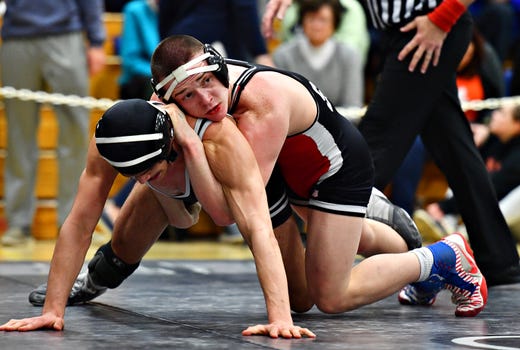 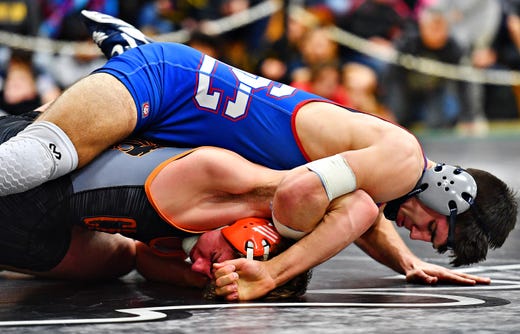 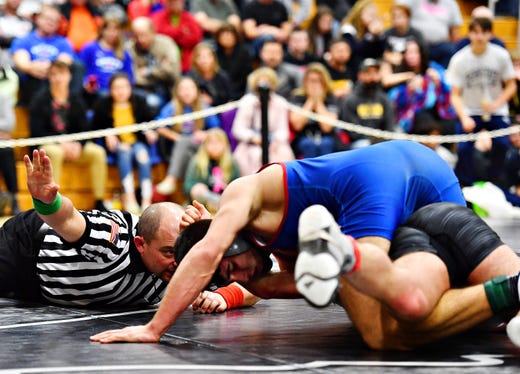 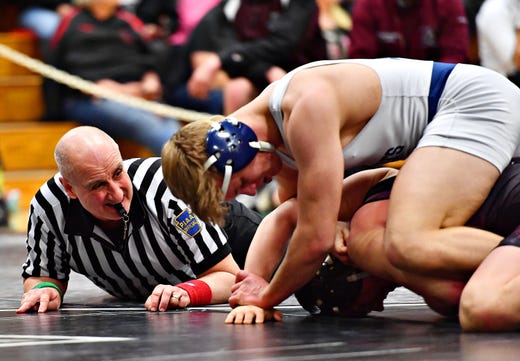 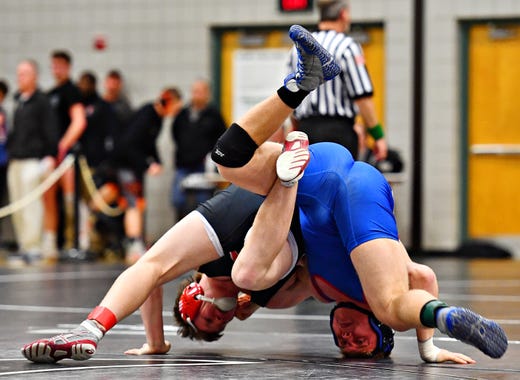 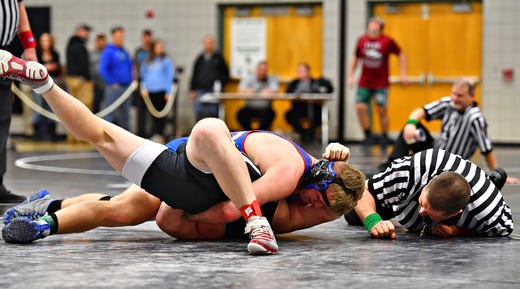 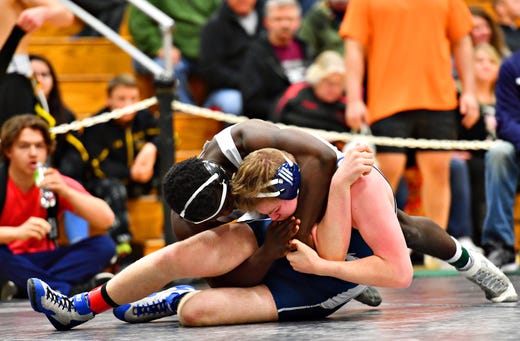 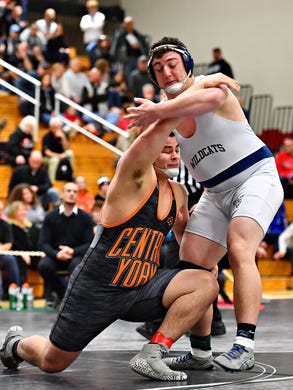 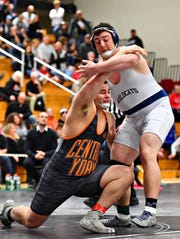 HANOVER — When the Central York and Dallastown wrestling teams squared off during the regular season, everyone was looking forward to an anticipated showdown between heavyweights Raymond Christas of the Wildcats and Michael Wolfgram of the Panthers.

When those two programs met on Jan. 3, however, Christas was still recovering from a head injury suffered in the finals of the Knockout Christmas Classic in Florida. So the showdown between the two unbeatens would have to wait until at least the District 3 Class 3-A Section 4 Tournament at South Western High School.

Saturday, everyone finally got what they wanted. After both Wolfgram and Christas cruised to victories in the quarterfinals and semifinals, the pair took to the mat in the final of the 285-pound division.

After a scoreless first period, Christas earned an escape to begin the second period to take the lead. It didn’t last long. Wolfgram was able to wear down the Dallastown standout enough to score six takedowns en route to a 12-5 decision.

“I feel like my conditioning has always been there,” said Wolfgram, a fourth-place finisher in the PIAA state tournament last year. “So I always feel good in the second and third periods. But he came out hard and it was a pretty good, contested match-up throughout. I know he has a really good coaching staff, so I knew they were going to have him ready.”

Although Christas came up short, the day was still a pretty good one for the Wildcats overall. Dallastown claimed the Section 4 team title with a score of 224 points, easily outdistancing second-place Gettysburg’s tally of 172.5 points.

While the first showdown this season between Wolfgram (28-0) and Christas (35-1) is now complete, there’s a good chance these two will face off again down the road in the District 3 tournament, or possibly even the state tournament.

While Wolfgram wouldn’t mind that, he’s trying to not get caught up in the hype.

“I think that everybody else was kind of looking forward to it more,” he said. “The fans, obviously, as there was a huge crowd of fans and the other wrestlers stayed around. But I just looked at it as just another match and another opportunity to go out there and compete.”

The result was a bit of a moral victory for Christas. The Dallastown heavyweight fell to his rival by just a decision for the first time. His previous losses came by pins or a major decision.

“I felt like the first period and a half it was a good match,” Christas said. “But he was able to start to find his stuff and got me a little overwhelmed a little bit. Unfortunately it didn’t come for me today, but it’s a chance to improve for the next time.” 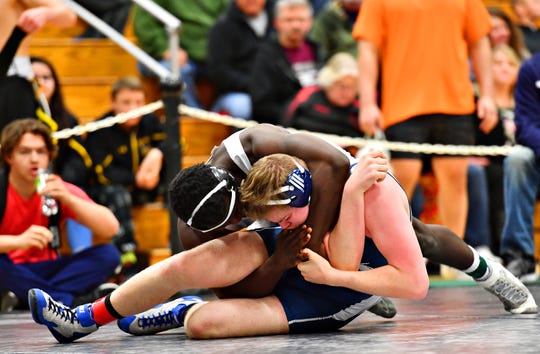 Wildcats excel: Christas was one of five Dallastown wrestlers to make it to the sectional finals Saturday. Jarrett Feeney (182) and Jamal Brandon (220) claimed titles, while Cael Turnbull (126) and Brooks Gable (138) finished second.

Feeney, who wrestled extensively at 195 in the team postseason duals, moved back down to 182 for the individual tournament. He scored an 8-5 decision over Max Gourley of Gettysburg to improve to 26-5 on the season.

Brandon, who has been the most common opponent for Christas during team practices, quickly took care of business in the title match when he pinned West York’s Frank Veloce in just 26 seconds.

“I had a bunch more energy for that last match than I did for the first two,” said Brandon, who improved to 38-3. “I haven’t really been sleeping well recently, but I was able to get a good 45-minute to an hour power nap in.”

Turnbull, who finished fourth last year, battled top-seed Logan Paluch of Central York (30-2) tough in a 3-0 setback to fall to 27-16.

The most unexpected showing for the Wildcats was certainly Gable’s route to the title match. Seeded sixth in the bracket, Gable (22-18) had to win a preliminary match Friday to advance to the quarterfinals. He did that via pin before scoring another pin and a major decision to make it to the final opposite Waynesboro’s Matt McCann, who earned a 6-4 decision near the end of the first overtime session.

“It was a heartbreaking loss,” said Dallastown head coach Dave Gable, who is also Brooks' father. “I thought that Brooks wrestled his heart out. It was definitely still a good day for him.” 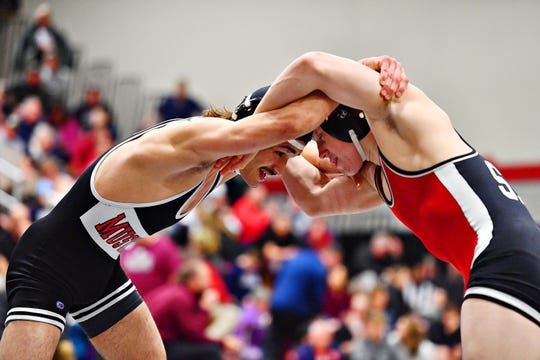 Romjue repeats for Susquehannock: While the two heavyweights have drawn a lot of attention during the regular season, Susquehannock junior Colby Romjue has been putting together another standout season. A sectional winner a season ago, Romjue positioned himself to repeat that feat Saturday.

The 152-pounder did just that with a pin in the quarterfinals and a major decision in the semifinals before winning a 7-1 decision in the final over Cavin Sullivan of South Western.

The final match was a contrast in sizes. Romjue is shorter and more compact than the taller and lankier Sullivan. That mismatch forced Romjue to play more defense against Sullivan, whom he has wrestled against in club season, than he is typically accustomed.

“He’s a tall guy,” Romjue said. “So you have to make them come in. You can’t try to extend yourself when you’re short. So I had to wait for him to come in tight, and when he did I was able to fire into a high crotch and get a double.”

Romjue, who improved to 24-1, is hoping to achieve better success this season at the District 3 tournament. Last year as a sophomore, Romjue finished sixth.

“I’m looking to win districts,” he said. “I think I’m wrestling a lot better now. I’m smarter and more aggressive and I think that I can take it.”

Glass upended top-seeded Luke Ohmann of Susquehannock in the 195 final with a first-period pin. Ohmann dropped to 27-2.

There were five champions from Adams County: Biglerville's Levi Haines at 106, Fairfield's Page Karsteter at 145, Bermudian Springs' Trenton Harder at 152, Littlestown's Carl Harris at 170 and Littlestown's Jason Penton at 182.

The District 3 Tournament is set for Friday and Saturday at Hersheypark Arena.