Dallastown is the lone York County team to earn a District 3 wrestling team playoff berth. The unbeaten Wildcats (16-0) are the No. 1 seed in 3-A. 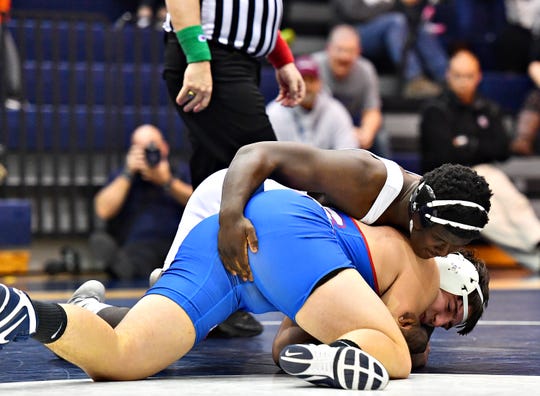 Dallastown's Jamal Brandon, top, seen here in action earlier this season, is 28-3 for the Wildcats at 220 pounds. (Photo: The York Dispatch)

Dallastown is the lone York County team to earn a berth in the District 3 wrestling team playoffs.

As a result, the York-Adams Division I champions will serve as a host site for Tuesday's first-round and quarterfinal matches. 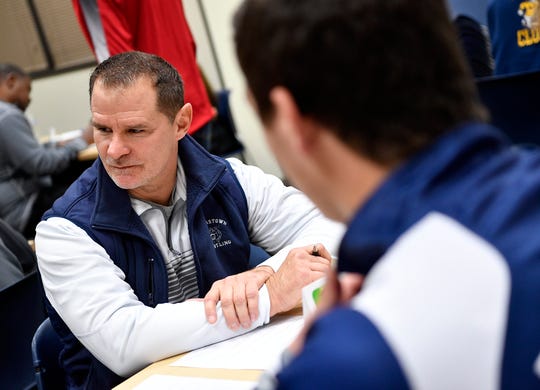 The 3-A semifinals are set for 5 p.m. Thursday at Spring Grove. The championship and third-place matches are scheduled for 1 p.m. Saturday at Milton Hershey's Spartan Center.

Bermudian is No. 2 seed in Class 2-A: In 2-A, Bermudian Springs and Littlestown from Adams County made the 12-team field.

Bermudian downed Boiling Springs in battle of longtime 2-A powers on Saturday, 31-25.

The 2-A championship and third-place matches are set for 3:30 p.m. Saturday at Milton Hershey's Spartan Center.

Reversal of fortune costs Spring Grove: On Thursday night, the Spring Grove wrestling team went from delirious to dejected in a matter of moments.

It was an epic reversal of fortune.

Spring Grove traveled to New Oxford on Thursday in a match that had serious District 3 Class 3-A implications.

The match ended in a 35-35 tie, which meant the winner would be determined by a tiebreaking criteria.

According to a report by Josh Martin in the Gettysburg Times, the match official initially determined that Spring Grove had won based on Criteria E — most six-point wins. That sent the Rocket wrestlers into celebration mode.

That first determination, however, didn't include a New Oxford forfeit victory at 106. So each team actually had four six-point wins.

Martin reported that former South Western wrestler Josiah Beers, who was in attendance at the match, alerted the match officials of the mistake.

So the match then went to Criteria F — most technical falls. New Oxford had a 1-0 edge in that category, giving the Colonials the tiebreaking bonus point and an unlikely 36-35 triumph.

The Rockets led the match 35-26 going into the final two bouts, but the Colonials won those bouts behind a pin from Timothy Uhler at 120 and a 6-4 decision by Lance Beckner at 126, creating the 35-35 tie and forcing the match into the tiebreaking criteria.

The win moved the Colonials to 11-5 overall, while Spring Grove fell to 10-7. As a result, New Oxford made the 3-A tournament, while Spring Grove finished No. 20 in the final District 3 3-A power ratings and missed the playoffs for the first time in nearly two decades.