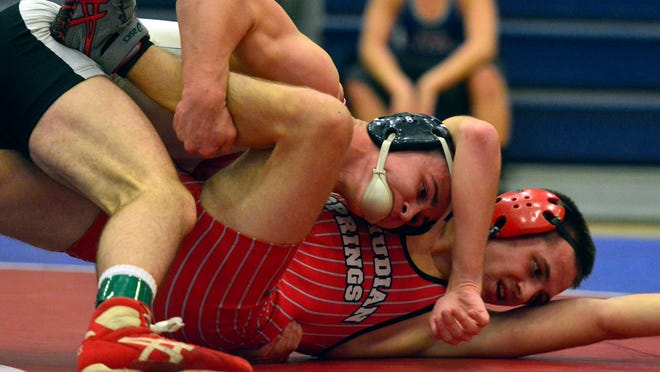 SPRING GROVE — Whenever Kennard-Dale senior Michael Bracey hit the mat this year for his wrestling matches, one thing was readily apparent.

No, it wasn’t his singlet. Nor was it his size. It's simply the streak of hair that flows out of the backside of his head, which is in contrast to an otherwise close-shaven haircut.

While the style — which he colored blue to go with his golden locks — was conceived as a joke. Blue and yellow are K-D's colors. Most of Bracey’s opponents, however, were not left laughing.

That can go for New Oxford senior Michael Rudisill, as well, who had the honor of facing Bracey in this year’s York-Adams League Senior All-Star Match at Spring Grove High School. The 126-pound Bracey piled up the points en route to a 10-3 victory.

The win aside, the big question on everyone’s mind was "who cuts your hair?"

“It started out as a joke,” said Bracey, who was wearing a "Fear the Tail" T-shirt after his match. “My dad did it my freshman year before the Disney Duals. And I went down there and went undefeated. Then I went to Junior Olympics, where I took third, and from there it was like 'I guess this is staying. It’s a good luck charm.'”

It certainly has worked for the Washington & Lee recruit. He finished the past two regular seasons unbeaten, parlaying them into a pair of PIAA state berths. Bracey, in fact, was only the second underclassman wrestler ever at K-D to make it to states.

The other was his idol, Chance Marsteller, who won the state title all four years he was with the Rams.

“Making it to states twice was a really cool highlight,” Bracey said. “And making it as an underclassman, as just the second person from our school to do that, was really cool.”

Scholarship winner: While wrestling was the main purpose of the event, which featured a series of matches pitting two elementary level grapplers against one another between the five varsity bouts, Bracey was also there for another reason. The York-Adams chapter of wrestling officials selected Bracey as a $500 scholarship winner.

“This really means a lot to me,” he said. “I’ve been working pretty hard throughout high school to make sure to keep my grades up as high as I can while I make sure I’m wrestling at my top level. So to get recognized for that was really cool.”

The chance to show off one more time as a high school wrestler was also certainly exciting for Bracey.

“This was a pretty good time,” he said. “I know a bunch of the seniors, as I grew up wrestling with them. So it was just kind of like hanging out and wrestling each other. Just kind of a light-hearted match.”

The matches: Only 10 varsity seniors were on hand for the event. One of them, Spring Grove’s Noah Colehouse, had no one near his weight to wrestle, while another, South Western’s Gage Thomas, was needed to wrestle twice.

Thomas was victorious in both of his bouts, defeating Jarod Miller of Bermudian, 16-5, in the first bout of the night, before scoring a 5-1 decision over Spring Grove’s Marcus Kehr to end the night.