Northeastern and Central York will write another chapter in their storied boys' volleyball rivalry on Tuesday night in the PIAA Class 3-A semifinals. 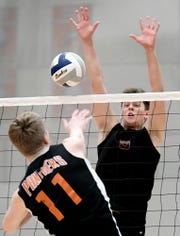 There will be a lot on the line when the District 3 Class 3-A champions from Central York take on the York-Adams League champions from Northeastern on Tuesday evening at Red Lion High School.

For one, the winner of the PIAA semifinal will earn the right to play for the state title on Saturday at the Pegula Ice Arena at Penn State University.

For another, the two sides enter Tuesday’s showdown having each won 10 sets against one another this season in a storied rivalry of traditional state powers.

Lastly, some pretty big bragging rights will be on the line for future college teammates Braden Richard of Central and Alex Finch from Northeastern. Those two will walk off the court Tuesday knowing the next time they see each other on the college volleyball court that they’ll both be wearing Saint Francis (Pennsylvania) University uniforms.

Finch, an outstanding middle hitter for the Bobcats, made his decision to attend the Loretto school shortly after taking an official visit to the school. Richard, a versatile threat from anywhere on the court, took more time to figure out his plans before deciding to follow Finch to the Red Flash.

Bragging rights: Both players agree that personal bragging rights are on their minds as they prepare to square off for a third and final time this season in a best-of-five dual match.

“I’ve been thinking about that a little bit actually,” Finch said. “But I think they have it now after winning the (District 3) trophy, and we’ve all had our fair share of bragging rights over the past few years.”

While the Panthers accumulated a 3-1-1 record in tournament play against their backyard rivals, the Bobcats won both the regular-season and league playoff title matches.The regular-season finale was certainly not memorable for the Panthers, who fell, 3-1. Richard, in fact, proclaimed it the "worst match we’ve played all year."

When the teams paired up again in the league tournament finals, that contest was what everyone expected to see the week before. The two sides traded momentum back and forth, with Central taking a 2-1 lead after three sets. The Bobcats rebounded to even it up before the clash was forced into a pivotal fifth set, when the Manchester boys prevailed.

Anderson healthy for Central: Richard pointed out that setter Brock Anderson was dealing with a hip injury in both of the matches against Northeastern. Anderson has had some time to recover and appears to be close to 100 percent, according to Richards.

That, and a better job of passing the ball, have helped contribute to Central’s late-season run.

“Brock’s setting has gotten a lot better,” Richard said. “He was hurt the first two times we played them, but now I think that he’s really healed and is putting the ball where we need it. And we’ve spent a ton of time at practice working on passing the ball better and I think we’ve picked that up a lot better too.”

Panthers hitting their stride: Since losing in the league final, the Panthers have seemed to hit their stride. Straight-set wins over Dallastown and Hempfield came before a showdown with No. 1 ranked Cumberland Valley. After falling behind 2-0 in that match, Central won the final three sets to make it to the district final.

In the final, Central was able to knock off a State College team that was coming off a thrilling victory over the Bobcats in the semifinals. The Panthers followed that up with a sweep in the first round of the state draw against Parkland before claiming a 3-1 victory over Pennsbury this past weekend.

Bobcats living on edge: The Bobcats haven’t followed a similar path. After pulling out a closer-than-expected district quarterfinal win vs. Exeter, the Northeastern boys were upset in four sets by State College in the semifinals.

Finch admitted that maybe his team was caught up in overlooking a Little Lions side that entered the district draw unranked in the state by the Pennsylvania Volleyball Coaches Association. The allure of getting a third battle with the Panthers may have entered the Bobcats' heads a little prematurely.

“I think that (looking ahead) was part of the reason we lost to State College,” Finch said. “I just don’t think that we respected them enough and we were just looking ahead to playing Central.”

After rallying to claim third place with a 3-1 win vs. CV, the Bobcats were forced into five sets in each of their state matches. Both opponents entered those matches as unbeaten district champions (Central Bucks East and Whitehall), but the Bobcats definitely had their backs up against the wall in both contests before improving to 4-0 this season in matches decided in five sets.

“I think we’ve had plenty of experience going to five sets,” Finch said. “And I think we play a pretty tough schedule and we like to get pushed a little bit. We’re used to the fight.”

A fight is definitely what both Finch and Richard expect Tuesday, when the ultimate bragging rights between future teammates will be earned.

“Now that we definitely have them in front of us I think that we’re hungry to make a statement,” Finch said.