York-Adams swimmers enjoyed a record-setting weekend in the pool at the league championships at Central York High School. 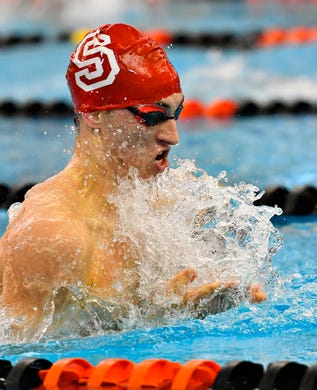 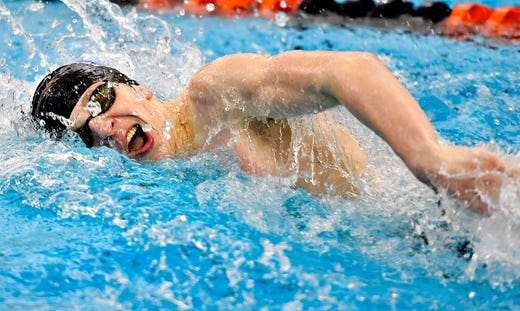 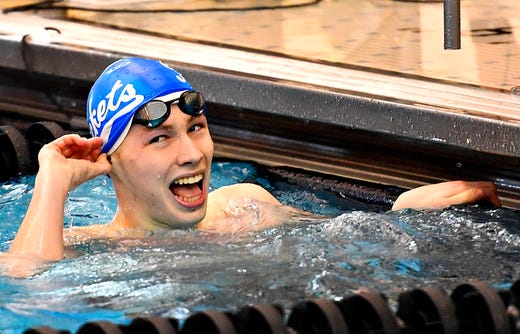 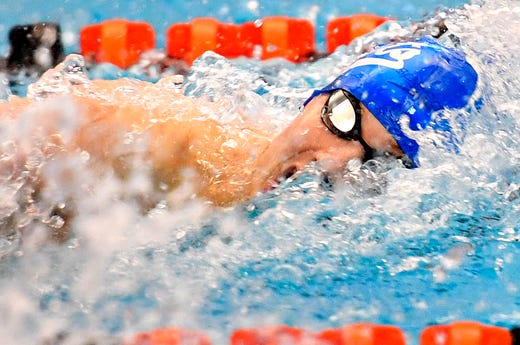 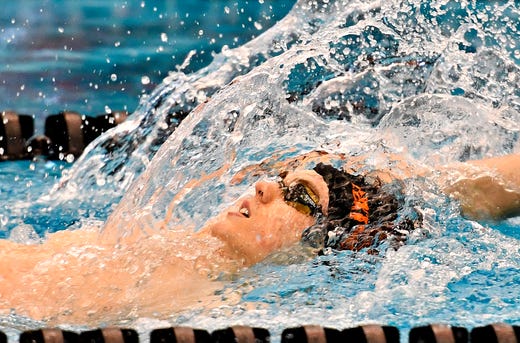 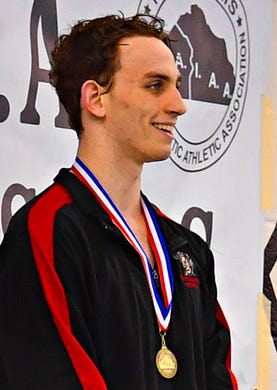 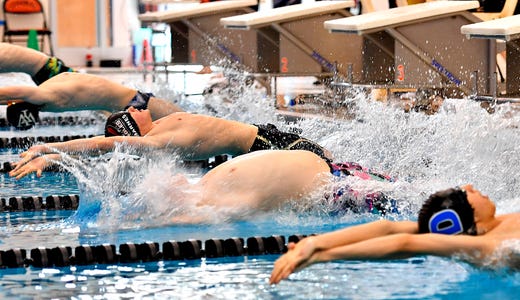 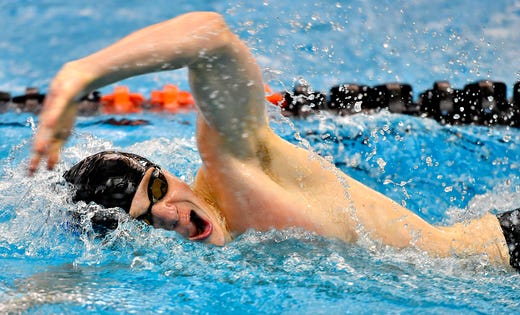 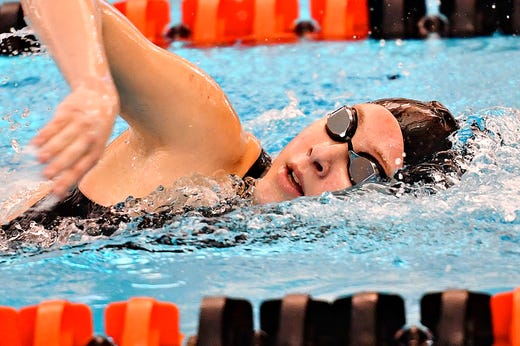 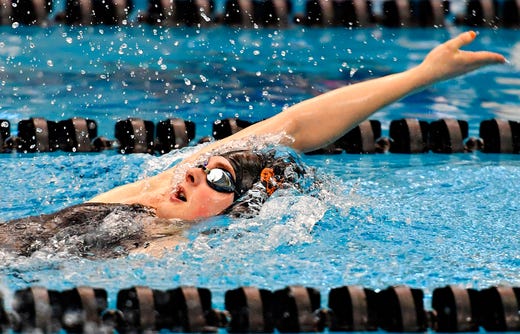 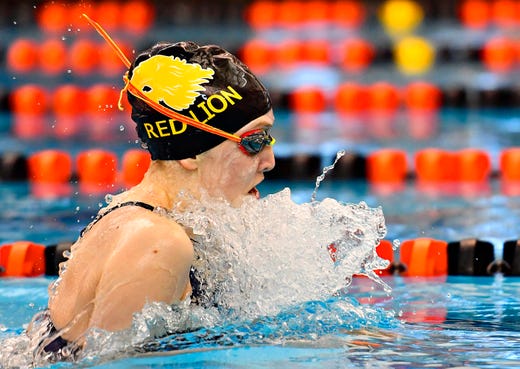 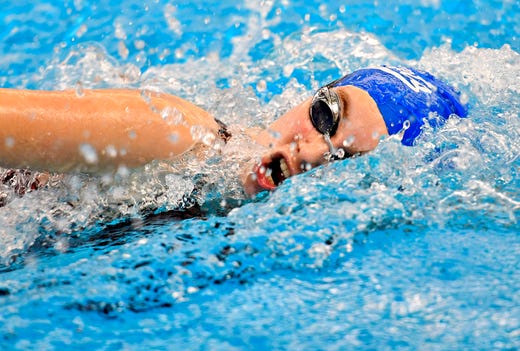 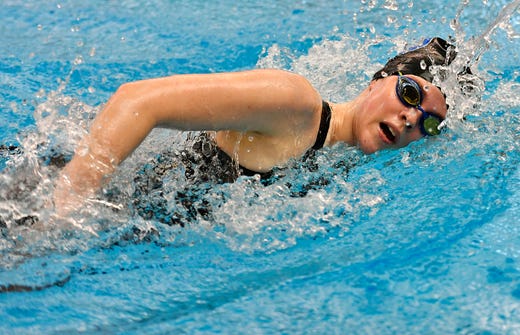 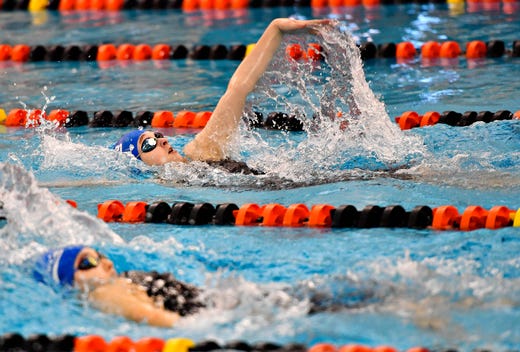 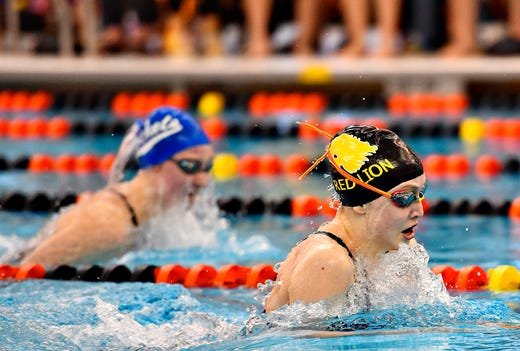 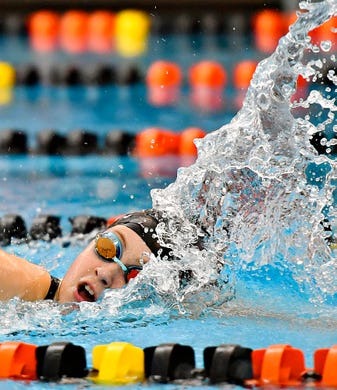 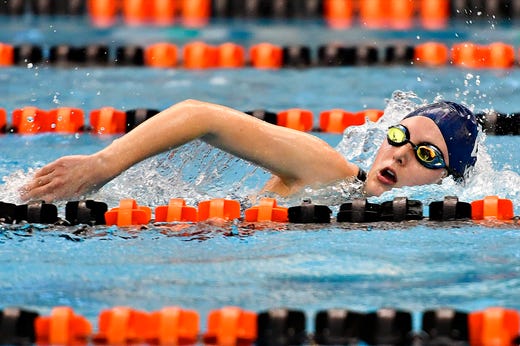 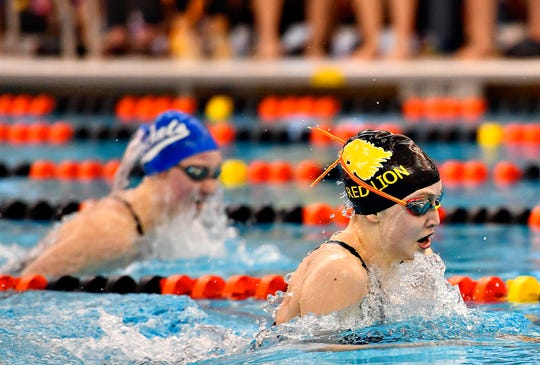 EMIGSVILLE — In a season dominated by swim teams such as Dallastown, Central York, York Suburban and Dover, it’s sometimes easy to overlook the accomplishments of talented individual swimmers from other teams.

Fortunately, the York-Adams League Swimming and Diving Championships this past weekend at Central York High School offered the opportunity for the spotlight to be taken off the stronger teams for just a bit. In the absence of team competition, several outstanding individual swimmers stepped into the limelight.

Spring Grove’s Daniel Gordon showcased his considerable skills en route to first-place finishes in the 50 freestyle and 100 freestyle, with the Rocket sophomore breaking records in the latter.

Gettysburg’s Hannah Brainard took a giant step forward as a sophomore, earning a pair of gold medals in both the 100 free and 200 free events.

Red Lion’s Arabella Butera narrowly missed winning a pair of golds herself, but nevertheless was thrilled to win a gold and a silver in her individual events. Butera, a sophomore, broke the league, meet and pool records in the 100 breaststroke. 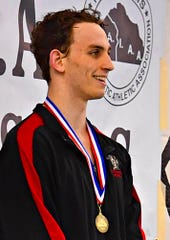 McFadden: Well known around the area as one of the most talented swimmers throughout the league, the Susquehannock senior was nothing but smiles after two monster performances during the Y-A event.

McFadden set the league, meet and pool records in the 200 individual medley with a time of 1 minute, 52.43 seconds on Friday night. That time bested runner-up Lucas Tate of Central York by more than five full seconds. His time also bettered perennial standouts Cameron Speed of Central and Matt Peters of York Suburban.

“Going into the race I had a goal of trying to get the records that Alec (Peckman) had previously,” McFadden said. “And I just went out as fast as I could and just tried to hold on and see what I could do.”

While McFadden wasn’t able to claim the pool record in the 100 breast Saturday, he did set the league and meet marks with an impressive time of 58.77 seconds.

Not bad for an event that McFadden admits isn’t necessarily one of his two strongest.

While McFadden’s season is exactly where he would like it to be at this time of the year, getting to this point wasn’t easy. A knee injury this summer required surgery which left him behind schedule.

“I actually tore my meniscus and had to have surgery on it in September,” he said. “So that set me back a little and I’ve had to practice twice as hard just to get back to where I was during the summer before the injury.” 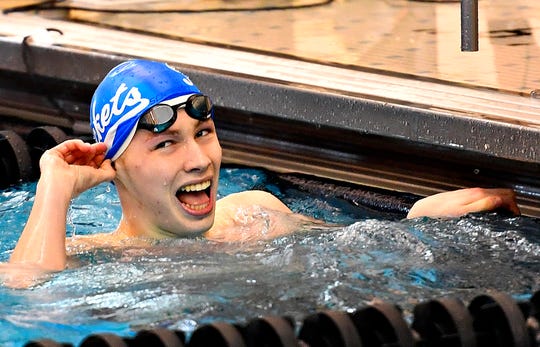 Gordon: As a freshman last year, Gordon missed winning two gold medals at the Y-A championships. This time around, however, the Spring Grove standout wasn’t going to be denied.

Competing against Northeastern’s Hunter Bachman, who won the gold in the 50 free last year, Gordon knew he couldn’t afford a single miscue in the rematch. Gordon swam flawlessly Friday night, which allowed him to edge Bachman by .08 of a second. Gordon’s time of 21.12 seconds was just .01 off the league and meet record of York Suburban’s Kevin Marstellar that was set in 2009.

“I have some goals set that I like to keep on the back of my phone,” Gordon said. “And I just focus on what I can do to get those goals. And I feel like a lot of it is just training well and going to practice and getting better.”

Much like a professional athlete may review film of his previous performances in the tape room, Gordon constantly is watching video of his swims to pinpoint areas that could improve his time. In events as short as the 50 free and 100 free, every tenth of a second could be the difference between winning and losing.

“I’m always looking for where I went wrong,” Gordon said. “Then at practice, I just work on getting better at that so the next time I can improve my standard.”

That standard is now the league mark in the 100 free, as Gordon again bested Bachman. Gordon’s time of 46.33 seconds set the league, meet and pool records.

Brainard: As a freshman last year, Brainard certainly did well for herself. She took home two individual medals to go with a pair of medals from the relay teams.

This time around, the Gettysburg standout took it to the max en route to gold-medal finishes in the 100 free and 200 free. After finishing sixth in the 100 free last year, she improved her time by nearly a second to earn the top spot atop the medal podium Saturday.

“I was more nervous for this event than I was for the (200 free Friday night),” Brainard said.

Brainard explained that swimming against teammate Morgan Newell tends to bring out some butterflies in the stomach. The Warrior sophomore, however, was able to edge both Gabby Miller of Central and Newell to claim a second gold in two days.

The first gold that Brainard scored came in the second event Friday night. Her time of 1:56.32 was more than three seconds faster than runner-up Micah Sopko of Central.

“I was excited for the 200,” she said. “That one was fun because that was my time from districts last year, so I just got my districts time here at counties. So now I’m excited to see what I can get at districts.”

Butera: Like Gordon, Butera was edged out in the 100 breast at last year’s event. Unlike Gordon, however, Butera wasn’t able to get a rematch. West York’s Meaghan Harnish graduated.

Instead of revenge, Butera did something even better – set records. Her time of 1:04.24 set new league, meet and pool records.

Butera seemed to enjoy the thrill and excitement of competing again in a facility in which the noise from fans and teammates grew quite loud at times.

“I love this environment,” she said. “The environment and my team cheering me on.”

The loud roar of the crowd didn’t immediately register in her mind shortly after she touched the wall. It took a few seconds before Butera realized what happened.

“I was so focused on touching the wall that I didn’t know,” she said. “I didn’t know for about 10 seconds, but it was awesome.” 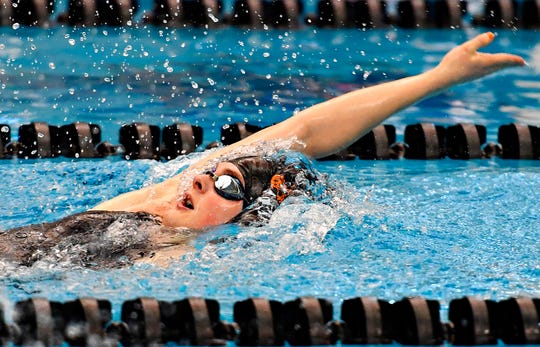 Notes: While those four individuals certainly stood out over the two days, the standout teams made their usual noise as well.

The Division I champion Central girls won the 200 medley and 400 free relay events. The 200 medley relay kicked off Friday’s event with a time — 1:47.69 — that set league, meet and pool records.

The trio of Camryn Leydig, Gabby Miller and Sydney Ullmer, all of whom were on the record-setting medley relay team, all claimed individual golds Friday. Leydig won the 200 IM, Miller took the 50 free and Ullmer scored a first-place finish in the 100 butterfly.

Leydig finished up Saturday by setting a school record en route to capturing the 100 backstroke before leading the 400 free relay team, which included Miller, to victory. Leydig’s time of 55.99 seconds bested her own mark of :56.19 that she set last year.

Leydig was equally proud of the job her relay teams did over the championships.

“I think we were all really excited,” she said. “I know that counties is a good meet for us as it really brings out the best times in all of us. And we were all prepared because getting a best time was our goal.”

The Division I champion Dallastown boys demonstrated why they were able to recapture the title back from Central this season.

Quinn Granholm won gold in the 100 free while Joel Dunnigan scored a first-place finish in the 100 fly Friday. Dunnigan then anchored the team’s 200 free relay team to a gold medal to close out the session.

Granholm and Justin Smick earned silver medals in the 100 back and 100 breast, respectively Saturday, before the Wildcats finished the championships with another gold medal in the 400 free relay.

“It’s always such a good moment whenever your teammates achieve something special like we did this weekend,” Dunnigan said. “And honestly that’s the best part of it for me … just watching my teammates do so well.”

While Dunnigan was pleased with his own gold-medal finish in the 100 fly, the relay events motivate him the most. He anchored both the 200 free and 400 free relays this weekend, so he is fully aware of what his three peers on those relays have done and are capable of doing.

“We always give it our all,” he said. “And I’m just so proud of them. We had a lot of guys with some big time drops, which is amazing.”