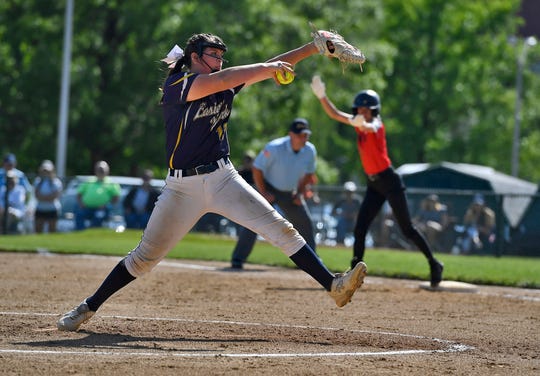 Eastern York's Maelynn Leber was the York-Adams League Division II Player of the Year and Pitcher of the Year for the 2019 softball season. (Photo: The York Dispatch)

After a long season filled with countless hours of practice, the top players in the York-Adams League were rewarded for their efforts.

When the league’s softball coaches recently released their list of 2019 all-stars and award winners, one player was surprised to see that she was named Division II Pitcher of the Year and Player of the Year, despite her tremendous season.

“I couldn’t believe it,” Eastern York pitcher Maelynn Leber said. “I am so honored. I try to work hard every year and it was really nice to be recognized and given that honor.”

Leber was the only player to sweep both major awards in any of the four Y-A divisions.

As a junior this past spring, Leber led Eastern York to a District 3 title on the mound and in the batter’s box. She had a 1.37 ERA with 128 strikeouts, and batted .486 with six home runs and 32 RBIs. She helped Eastern to a 14-8 overall record, including the D-II title.

0-0 after 1. Maelynn Leber has the only hit for Eastern York and took one away with this catch on a line drive pic.twitter.com/uDQvFh8sJR

With several seniors graduating, Leber said she will have to work even harder next year for the team to be successful and achieve her goal of playing softball in college.

Division I: One player who has known where she will be playing in college for some time is Northeastern’s Haley Updegraff. 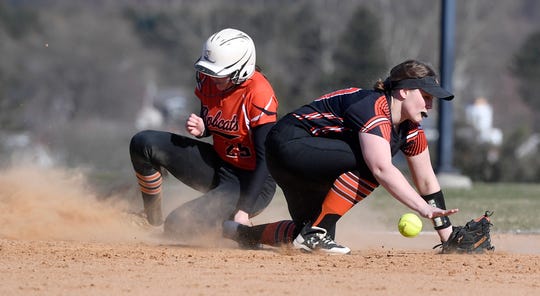 Northeastern's Haley Updegraff is shown here sliding into third base in a file photo. Updegraff was the York-Adams League Division I Player of the Year for a third straight season. (Photo: The York Dispatch)

A NCAA Division I Fairfield University-bound catcher/utility player, Updegraff earned her third straight Division I Player of the Year honor this season.

Although she knew the feeling of winning the award, Updegraff was still excited to receive the recognition after a renewed focus on her team this season. The Bobcats finished with a 14-6 overall mark and finished second in D-I.

“Last year I focused on myself. This year I wanted to focus on the team,” Updegraff said.

Updegraff said she was excited to begin the next chapter of her career at Fairfield and that she would play whatever position the team needs next season.

Another player who will continue her softball career in college is Spring Grove pitcher Hailey Kessinger. The 2019 Division I Pitcher of the Year will attend the University of Mount Olive, an NCAA Division II program in North Carolina. Kessinger helped the Rockets to a 19-3 overall record and a Y-A D-I crown. 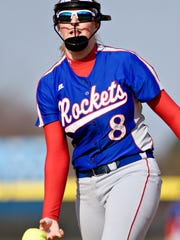 Spring Grove's Hailey Kessinger was named the York-Adams League Division I Pitcher of the Year. (Photo: The York Dispatch)

Littlestown pitcher Amaya Bowman earned the Division III Pitcher of the Year award with a 12-4 record and a 2.41 ERA. Littlestown, which finished 16-6 overall, won the D-III championship.

Rickrode was a major reason that Delone won the D-IV title and the overall Y-A League playoff crown.The Squirettes finished 20-5 overall, finishing second in the District 3 Class 3-A playoffs. Delone advanced to the state 3-A quarterfinals. 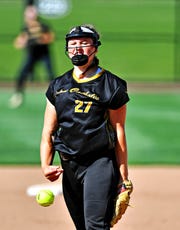 The full list of all-stars and award winners is below.