Central York suffered a 1-0 loss to Central Dauphin on Wednesday in the District 3 Class 6-A softball championship game. 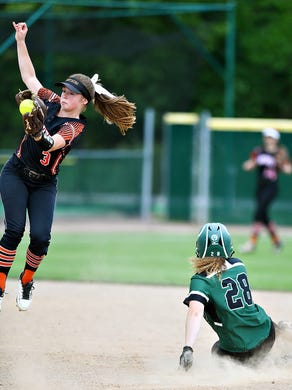 Central York's Kristina Landis catches the ball for an out during District 3, Class 6-A softball championship game action against Central Dauphin at Messiah College in Mechanicsburg, Wednesday, May 30, 2018. Central Dauphin would win the game 1-0. Dawn J. Sagert photo The York Dispatch
Fullscreen 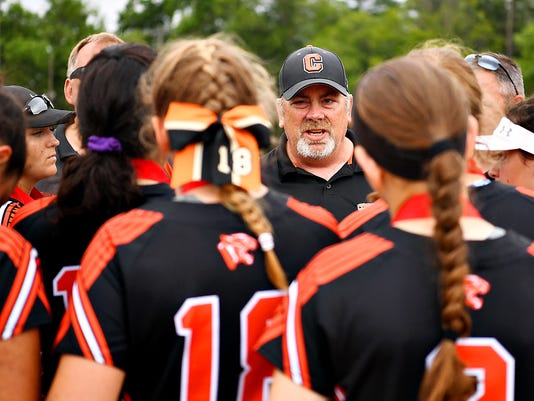 GRANTHAM —- By the estimation of Central York softball coach James Miller, his Panthers simply had done to them Wednesday what they had been doing to opponents all year —utilizing timely hitting and dominant pitching to rack up a victory.

Unfortunately for the top-seeded Panthers, Wednesday was just about the worst time to have the tables turned.

A top-notch performance both in the circle and at the plate by Central Dauphin’s Sam Gress helped the sixth-seeded Rams to a 1-0 upset victory in the District 3 Class 6-A title game at Starry Field at Messiah College. It was the Panthers' first loss of the season.

After keeping the Panthers' bats at bay for most of the afternoon, Gress found her spot to be a hero at the plate in the top of the sixth.

Erin DelPierre roped a shot to left-center field that dipped under the glove of Panthers center fielder Krista Landis, resulting in a triple with one out and bringing Gress to the plate.

The Rams hurler helped her own cause by squaring around to bunt on the 1-1 delivery from Central ace Courtney Coppersmith. Gress reached high for the pitch before dropping a ball that stopped dead in the dirt just outside the right-handed batter’s box.

As the Panthers' pitcher, catcher and third baseman all converged on the ball at same time, their brief indecision over who would field it allowed DelPierre to race home from third for the game’s lone run.

Gress erased a pair of Panthers' runners in the bottom half of the sixth and later closed out the game with her seventh strikeout. Gress was efficient, needing only 80 tosses to go the distance while allowing five hits and one walk against her seven Ks.

Central had chances: As Miller stated, the Panthers (21-1) weren’t without their chances in a game that saw them strand six runners, four in scoring position.

Central’s biggest threat came in the bottom of the fourth when a Taylor Sanders lead-off single was followed by a ground-rule double by Coppersmith. The Panthers' pitcher ripped a shot down the third-base line that rolled into the corner and under a gate before Sanders could round third.

Gress, who by Miller’s assessment was the best pitcher the Panthers had faced in 2018, responded with back-to-back strikeouts and then an inning-ending groundout to second.

Coppersmith excels: In what was a title-worthy pitchers' duel, Coppersmith’s line would have read as the more dominant one, save for the title-relinquishing run.

The Maryland-Baltimore County recruit threw seven innings of three-hit ball, striking out 11 and walking three. Until the sixth, a bunt single from DelPierre and two walks were the only runners allowed by Coppersmith.

One of the those walks came to start the fifth, and Rams replacement runner Jillian Kendra stole second, giving the Rams (16-5) a chance to break the game open with no outs. Coppersmith, however, buckled down and recorded a looking strikeout, a pop-up back to the circle and another strikeout to escape the jam.

Coppersmith was 2 for 2 at the plate and Sanders finished the day 2 for 3. Erin Cabry also had a hit for Central.

Up next: Next up for the Panthers is a chance to redeem themselves in the PIAA Class 6-A tournament starting on Monday against the District 11 champion at a site and time to be determined.

Miller, who still feels his squad is a top contender for a state title, implored his club that a short memory is a skill that will serve them best going forward.

“The most important game is Monday. Our goal is states and we’re there,” Miller said. “We want to go all the way. …It (Wednesday) is a bummer? Yeah. But it’s easier to go 5-0 (in PIAA play) than 27-0 (if Central would have gone the season undefeated). That’s what we’re trying to do. That’s our focus now.”