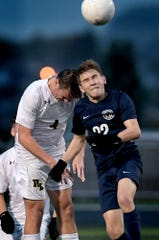 DALLASTOWN — Had a few things gone their way during the regular season, the Red Lion boys’ soccer team likely would've avoided a dreaded showdown with backyard rival Dallastown in the first round of the District 3 Class 4-A playoffs.

Those things — an upset win by another 4-A team and a couple of loses by the Lions — left the 16th-seed Lions with a clash against the top-seeded and unbeaten Wildcats Tuesday evening at Wildcat Stadium.

Just like every other team this season that has gone up against the nationally-ranked hosts, the Lions left disappointed. A goal late in the first half by Dallastown’s Nick Nilphai was followed up by a back-breaking penalty-kick tally by Matteo Conigliaro just seconds into the second half.

Facing a team with skill which also pressures the ball like no one else in the area, the Lions (7-9-1) saw their season conclude after a 2-0 setback.

Dallastown (21-0) moves on to the quarterfinal round at noon Saturday at Dallastown against eighth-seeded Chambersburg (12-5-1), a 2-0 winner vs. ninth-seeded McCaskey (18-4) in a first-round contest Tuesday.

“The best team won on the night,” Red Lion coach Mike Watt said. “We fought hard and dug deep, but it wasn’t enough.”

Decimated throughout the season with a slew of injuries to key players, Watt could only shake his head when attacker Ben Weinstein went down with an ankle injury in the first half. It would be quite a chore playing against any other team in the league with that many injury issues, but doing it against a team that was ranked No. 1 in the state by the USA Today Top 25 Expert rankings was downright impossible.

“That PK to start the second half made it a mountain for us,” Watt said. “I thought that if we could somehow keep it 1-0 well into the second half …. you never know. But to give up a penalty so easily really made it very, very difficult for us.” 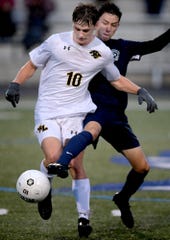 So did the skill, depth and constant pressure that the Wildcats apply to every opponent.

“From as far as I’ve seen in playing them three times this year, they’re as good as any team out there,” Watt said. “It’s the pressure, and they have very talented players. They just possess the ball and they have a lot of talent on the bench that they can call upon when needed. They make it very difficult for you to play against them.”

Like he did throughout the regular season, Dallastown coach Andrew Foust declined requests to talk about his team’s victory. Perhaps a bit superstitious, Foust likely didn’t want to jinx his team’s chances as they move forward in the District 3 draw.

Who could blame him? The old saying ‘if it ain’t broke, don’t fix it’ seems to perfectly fit Foust and his team.

You can count Watt as a believer. When asked if he thinks Dallastown can win a District 3 title, he took his answer one step further.

Littlestown 4, Tulpehocken 2 (PKs): At Littlestown, the eighth-seeded Lady Bolts and ninth-seeded Tulpehocken couldn't score through regulation and two overtimes of a District 3 Class 2-A first-round contest. Littlestown (14-5) eventually claimed a 4-2 win in penalty kicks. Tulpehocken finished at 11-7-2. Littlestown next travels to top-seeded ELCO (13-4-2) at 7 p.m. Saturday in a quarterfinal match. ELCO had a bye on Tuesday.

Central York 3, Dallastown 0: At Northeastern, the York-Adams League champions rolled into the District 3 Class 4-A quarterfinals. The sixth-seeded Panthers improved to 16-3-1. No. 11 seed Dallastown saw its season end at 10-6-2. Central will next visit No. 3 seed Wilson (18-4) at 7 p.m. Saturday.

Wilson 3, Northeastern 0: At Wilson, the 14th-seeded Bobcats saw their season end with a District 3 Class 4-A first-round loss to the No. 3 seed. Northeastern finished at 13-7-1. Wilson improved to 18-4.