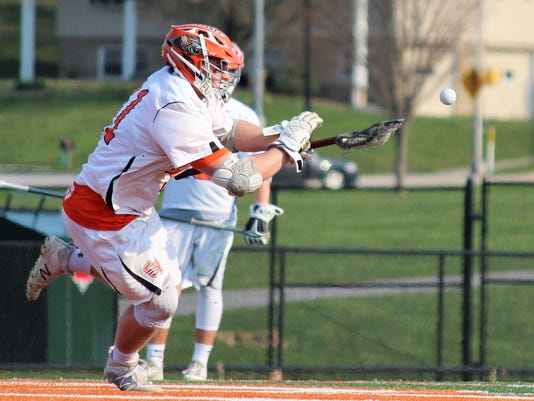 Central York's Kollin Vaught tries to gain possession of the ball after a faceoff during an Apr. 13 home game against Dallastown.(Photo: Elijah Armold ---York Dispatch)

Central York boys’ lacrosse coach Ryan Muller says his team has a motto it likes to repeat on the sidelines: "Make it, take it."

It’s the premise that, after the Panthers score a goal, they immediately regain possession by winning the ensuing faceoff.

There might not be an area team better suited for living by that mantra than the Panthers.

“Kollin is a mutant. He’s an incredible kid, first, and an incredible face-off kid. But he’s a great person, too,” York Suburban head coach Luke Beam said after a game with the Panthers. “You know you don’t even feel that bad losing to him, because he’s such a nice guy.”

Vaught approaches the game with a humbleness that wouldn’t normally be expected of position that requires raw power and aggression. He’s aware that, despite his talents, he’ll occasionally lose a draw, and is quick to deflect credit to his teammates, especially those on his wings.

A FOGO's place: The FOGO, as the position is often referred to, is charged with winning a faceoff and racing off the field to be replaced by an extra attacker once possession is secured.

Gaining that sustained custody of the ball has helped the Panthers offense go on extended scoring runs this season that have rescued them from some early holes.

It’s helped the defending league champions compile a 7-0 overall record, with a 6-0 mark in York-Adams League play. They’ve also scored 104 goals on the season, with 87 coming in league action. Both marks are second best in the league.

A first-team all-star a season ago, Vaught has won 122 of the 139 faceoffs he’s taken this year, which translates to a league-best 87.8 win percentage. Almost half of Vaught’s losses on the season came against York Catholic’s Andrew Snelbaker, regarded by many coaches as the second-best FOGO in the league, who went 7 of 22 against the Central standout.

“By far Kollin is the best in the league,” York Catholic coach Shane Harper said. “… Splitting faceoffs with that team is really a plus, it’s really hard to do.”

Vaught’s efforts in the fourth quarter helped the Panthers lock up a 10-8 victory on Friday against Dallastown (7-1, 6-1) to vault Central to the top of the league standings. With the game knotted at 8-8 late, Vaught won a faceoff that led to the Panthers taking the lead with 6 minutes, 15 seconds left to play.

Vaught won the ensuing draw and the Panthers held possession, wiping more than three minutes from the clock and chalking up an insurance goal in the process before the Wildcats saw the ball again. Vaught won 17 of 20 total draws against the Wildcats.

Vaught is also seeing an ever-growing role on the attack, which has yielded four goals this season, but both Vaught and his coach say that part of Vaught's game is a "work in progress."

Early taste of success: The senior Eastern University commit first noticed his acumen on the "X" during an early taste of varsity action during his freshman season.

“My freshman year, coach (Tom) Mayne (the coach before Muller) told me ‘Kollin, you’re suiting up tonight,’ and it was against Dallastown. And the Dallastown guy was the best in the county at that time,” Vaught said. “So, I was really nervous, and then I’m in the tunnel and I thought ‘I can’t believe I’m doing this.’”

After the players above him on the depth chart kept losing on the draw, Vaught’s number was called. He recalled promptly winning his first faceoff and developing an addiction for the adrenaline rush of success.

Top tutelage: Since that initial victory, Vaught has refined his game by seeking out the top tutelage around. Starting with the summer before his sophomore season, Vaught began traveling to the lacrosse-crazy Baltimore area to train at Fast Break University.

There he worked with FBU founders Brent Hiken and Jeremy Rualo Sr. Hiken was a national champion and All-America FOGO at NCAA Division III Stevenson University before going on to a Major League Lacrosse career. He’s currently a member of the MLL’s Atlanta Blaze.

Vaught also spends time with the Rock Lacrosse Club in the Baltimore area.

Those experiences have helped him learn the physics of the sport and hone his skills.

His specialty is one that relies heavily on force and torque, and Vaught’s physique is aptly suited for the task. Standing at 5-feet, 9-inches and weighing 215 pounds, Vaught looks every bit the part of football player and power lifter that he also lists on his athletic resume.

“It’s a grueling battle on that face-off 'X,' so it takes a lot of stamina to go out there 30 or so times a game,” Muller said. “His build is perfect for faceoffs. He’s short, stocky and powerful. And he works his butt off, and he’s one of the hardest-working kids we have, and we have a lot, and it shows on the field.”

The draw begins with the ball on the ground between the grounded, parallel sticks of the opposing players. When the whistle blows, the object is to overpower one’s opponent to gain possession by popping the ball up to oneself, or flipping it back to a teammate on the wing or creating a loose ball and race for control.

“(Vaught’s success) first comes with wing play. A lot of people don’t know how to do wing play,” Vaught said. “Fortunately, here we have some of the best around … So, the benefit there is on 50-50 ground balls, and me getting it up to myself and then to my teammates.”

Wing support: Opponents will often try to counter Vaught’s dominance, who is particularly adept at winning the draw to himself, by assigning a player to check his stick and disrupt possession.

“We can keep the guy that’s on the wing with us, keep him off (Vaught) and try to help Kollin get a clean draw so he doesn’t have any interference,” Behler said. “You can go down and score and then you get the ball back and keep scoring and they never get the ball on offense, so that certainly helps.”

Another Vaught: Seeing a Vaught succeed in the "X" for the Panthers might not end with this season. Brady Vaught, a junior varsity defenseman who also floats up and occasionally takes faceoffs in varsity action, is a sophomore in the Panthers' pipeline.

The two brothers routinely practice together, both at Central's facilities and at home, and the elder Vaught already has high praise for his younger brother’s abilities.

“That’s what I hope, but it’s his life, his decision,” Kollin said of possibly being succeeded by Brady. “If he wants to, he can. Me, I kind of push him like 'yeah you could play next year, you could take over for me,' because my parents always told me my brother is better than me and I’m like ‘Yes. He’s going to be.’ I want him to be.”