Some York County players will get a taste of outdoor ice hockey on Wednesday in the CPIHL all-star contest at Hersheypark Stadium. 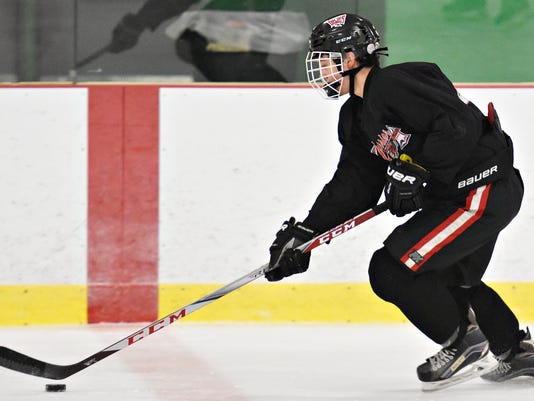 "We're going to be living outside next week."

Central Penn Interscholastic Hockey League president Steve Aaron let out a chuckle as he began talking about the second outdoor all-star game for the CPIHL.

Like the Hershey Bears, who played their Outdoor Classic against the Lehigh Valley Phantoms on Saturday, the CPIHL will take hockey back to the pond with two games at Hersheypark Stadium: a regular season game between Lower Dauphin and Hershey — teams fighting for the two top spots in the Bears Division — at 6 p.m. Monday and the all-star game at 7:45 p.m. Wednesday.

The league held a draft last week to slot players onto either team.

The last time high school players got this chance was in 2013, before anyone currently in the CPIHL was in high school. Now, for the second time in CPIHL's history, a new era of players will get the same opportunity.

"For players, coaches and families it’s a rare opportunity to be part of that outdoor hockey spectacle," Aaron said. "All of us hockey fans look forward to Jan. 1 and seeing these magnificent stadiums with these great outdoor rinks. Thanks to Hershey, to have that same opportunity here in our backyard, is pretty special."

A big event: For Aaron and the CPIHL, this event is a pretty big one. The hope is to bring in more recognition for the sport.

"We’ve been blessed with a lot of great student athletes," Aaron said. "You’ll get to see their speed, their skill and their strength on display in the unique venue. We had a tremendous all-star game last year and we’re excited to feature another great game this year.

"It’s an exciting time for the league and when we had our draft, you could tell the players and their families were excited at the prospect to play this game outdoors."

The forecast for the all-star game shows temperatures around 30 for game time.

That's a sharp contrast from the last time the game was in the elements. The 2013 game was played in harsh conditions and bitter cold, Aaron said.

"Five years ago we had bitter cold weather — not unlike what we just went through," Aaron said, recalling the first outdoor game. "Fortunately, it’s looking like it’s going to be a little bit better next week. That just makes it a little bit more pleasant for the fans ... and for the players it’ll be a little less severe on the ice."

A lot of work: A lot of work has gone on at the CPIHL's end to get ready on an accelerated schedule. The all-star game is typically held at the end of the season.

The all-star committee and the executive committee held the all-star draft already, and had to create programs, get staff for the games, get a public address announcer, put music together, and create apparel for the parents, players and fans.

The Bears have gone through a lot putting the Outdoor Classic together and the CPIHL understands how it feels.

"It’s a lot and we’re a completely volunteer-driven organization, so I’m so appreciative that we have an executive committee and an all-star committee that has given their time to bring it all together," Aaron said. "It definitely takes a team effort and we have a tremendous team that works in the CPIHL."

Also, for the first time, the middle school all-stars will take to the ice before the high school players at 6 p.m. to take their turn in the outdoor atmosphere.

Parking for Wednesday's games is free, as is entry into the stadium.