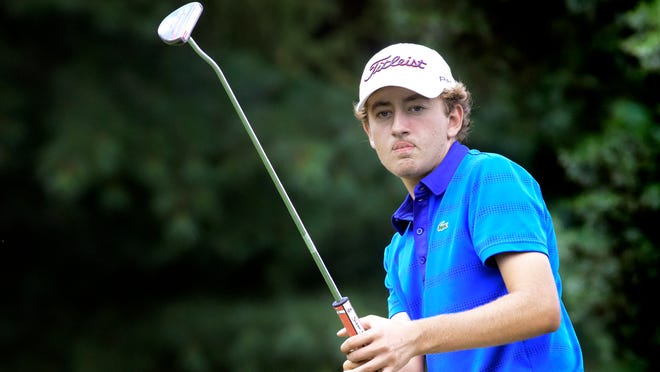 Will Gekas was trailing for the first time in the George Barton Match Play Championship.

Standing on the 10th tee at Grandview Golf Course, Gekas was facing a two-hole deficit in his title match against Justin Gruver.

Both players hit solid shots on the 150-yard, par 3 and enjoyed good birdie opportunities. Gekas was up first, and he made his 15-foot putt; Gruver then missed on his 10-footer.

That gave Gekas the momentum he needed to defeat Gruver 2&1 in the York County Junior Golf Association event on Tuesday, Aug. 1. It marked the first time that Gekas had won the Barton Match Play crown.

Gekas credited his caddie, Dominic Ferro, for being a calming influence when he fell behind. Both Gekas and Ferro will be seniors at Central York in the fall.

"Overall, I thought I played really well and hit the ball really well," Gekas said. "I made a couple mental mistakes, but I had a good friend on the bag, and he kind of kept me in it and focused."

Gekas entered as the tournament's top seed after a strong YCJGA regular season. After a first-round bye, he beat No. 8 seed Jacob Withers 4&3 in the quarterfinals on Monday, July 31, before winning his semifinal over No. 12 seed Jon Giambalvo, 2 up, on Tuesday morning, Aug. 1.

"My first match vs. Jon Giambalvo, it was pretty intense," Gekas said. "I was 2-up, and he got back to all-square. Being able to win that gave me a lot of confidence heading into the final."

Gruver, the No. 7 seed, earned a 2&1 semifinal win over No. 3 seed Logan Snyder to set up the championship match vs. Gekas.

"I saw this tournament as a pretty big deal for me," said Gekas, who estimates he shot around 3- or 4-over par in both the semifinals and finals. "It's a big step forward. There was a lot of pressure in this tournament. It ranks high up there for me (among his golfing accomplishments)."

Gekas has a lot of golf ahead of him this summer and fall. He plans to play in the Regents' Glen Country Club Championship this weekend and then he'll be part of a Central York High School team this fall that is expected to be a powerhouse. That Panthers team includes Gekas, Ferro, Joe Parrini, Julianne Lee and Carson Bacha, among others.