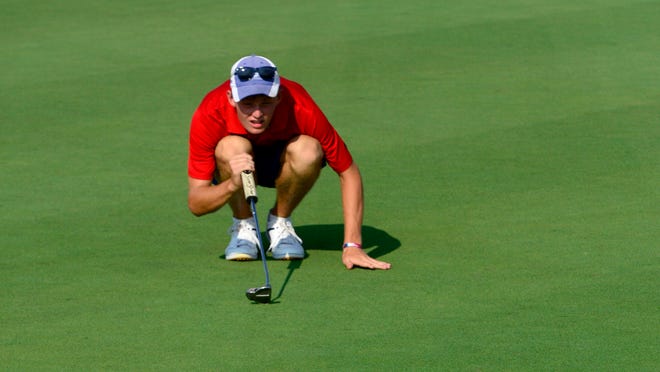 If there's anything that the first York-Adams Division I golf match told us on Thursday, it's that Central York will be the team to beat — again.

Even without junior Joe Parrini at the season's first match because of a prior commitment to play a junior tournament, the Panthers reached into their depth to fill his spot and hardly missed a beat. Central's No. 2 player, Julianne Lee, wound up tying for the day's low individual score with a level-par 72, matching Spring Grove senior Luke Hoffnagle. Four of the Panthers' six golfers finished in the top 10, good for a four-player winning team score of 308 at Royal Manchester Golf Links.

Finishing second to Central was Dallastown with a 322 total, with Spring Grove taking third with a 332. Those two schools will likely contend with each other all season for the second and third positions.

"I think we did OK," Panthers' first-year coach Sean Guerin said. "I thought the course was playing a little difficult for these kids and it was the first match of the season, so everybody has some nerves."

There's no doubt that Thursday's round was going to be a challenge, especially since Royal Manchester will be one of the most difficult courses the players will contend with this year. The course demands the most from the players, forcing them to hit straight drives, with long fescue awaiting any errant tee shots. Large, firm, slick greens make scoring extremely challenging.

Yet, several players got their seasons off to strong starts, including nine who broke 80 on the day. After Lee and Hoffnagle, Wildcat senior Blake Sebring and New Oxford's Michael Robinson both shot 76s, followed by a 77 from Dallastown's Brady Williams, a 78 by Central's No. 1, Carson Bacha, and 79s from the Panthers' Will Gekas and Brady St. Pierre and the Rockets' Mason Staub.

"I feel like I played well," Hoffnagle said. "I struck the ball well off the tee and my approach shots were close enough where I could two-putt (for par) or make birdie."

Establishing a benchmark: Thursday's round gave the players an idea of where they stand for the rest of the season.

"I'd say this is probably one of the tougher (courses) we're going to play," Staub said. "So, after you shoot the score you shot here, to go to other courses, you have your benchmark set, so anything better than today is good and anything worse, I don't know, the benchmark is set for the toughest course, so you just work off of that."

Individual stars shine: While Central will be the team all the other schools are chasing this year, Thursday's round also showed that several schools have individual players capable of making deep postseason runs.

One of those players is Sebring, who expected to get a little bit more out of his round, considering that he works at the course and played it all summer.

Still, the senior gives the Wildcats a strong option at No. 1, followed by Williams and then Evan Greenplate, who will slot into the team's top three once he returns from South Carolina.

But, for Sebring, like several other of the league's top players who are seniors, this year is his last chance to try and qualify for the state tournament after narrowly missing the previous two years at the regional tournament. His scoring average was a 73 in 2015, so he's hoping that, despite the 76 to open this season, he can go lower on a regular basis and make it to Heritage Hills Golf Resort to close his high school career at the state competition.