Earning all-state recognition is one of the top honors that any high school athlete can achieve.

Becoming a three-time all-state performer is among the rarest of scholastic accomplishments.

Thomas was honored in Class 3-A, while Clabaugh was recognized in Class 2-A.

Thomas and Clabaugh were among 14 Y-A athletes named to an all-state team by the PVCA in 2019.

Tesia Thomas: Thomas, a 5-foot, 7-inch senior middle hitter, will leave West York as one of the most accomplished athletes in school history. She’s also a standout in track and field and swimming. She’s expected to compete as a track-and-field jumper in college.

Thomas is a two-time Y-A Division II Player of the Year in volleyball. She was key contributor to West York’s 2018 3-A state title volleyball team.

Thomas eclipsed the 1,000-kill milestone for her career. She finished with 242 kills, 23 aces and 23 blocks this season while leading the Bulldogs to the D-II title for a fourth consecutive season.

“She has been the most athletic young lady I have ever coached,” West York head coach Joe Ramp said. “She always wants to improve her goals.” 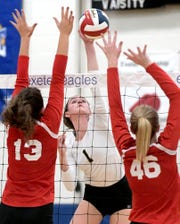 That helped the 5-10 outside hitter repeat as the Y-A D-III Player of the Year.

“Having a front-row seat and getting to watch her grow up has been one of the most rewarding and memorable experiences I've ever had, or ever will have, as a coach,” Delone head coach Scott Leppo said about Clabaugh.

South Western’s Ali St. Rose was again recognized in 3-A, while York Catholic’s Hope Leavy-Gaskins and Delone Catholic’s Brooke Lawyer were again honored in 2-A.

St. Rose was the Y-A D-I Player of the Year in 2019 and she plans to play college volleyball for Indiana University of Pennsylvania. The 5-8 senior outside hitter smashed 244 kills to go with 41 aces, 190 digs and 15 assists this season.

Lawyer, a 5-10 senior, is an all-state performer in two sports. She’s also been recognized in basketball. She was the leading scorer on Delone’s 3-A state basketball championship team in March. She plans to play basketball on the NCAA D-II level for Lock Haven.

The Y-A League had three other all-state honorees in 3-A: York Suburban’s Lauren Guyer and Eliana Rodgers and West York’s Kambrie Hepler. Guyer is a 5-5 senior libero and Rodgers is a 5-9 sophomore outside hitter. Hepler is a 5-3 senior libero.

Finally, in 2-A, four other Y-A athletes earned all-state honors: York Catholic’s Grace Shelley and Madeline Walker, Delone’s Emma Schneider and Littlestown’s Peyton Gullickson. Shelley is a 6-1 senior middle hitter, Walker is a 5-5 junior setter, Schneider is a 5-7 senior libero and Gullickson is a 5-5 senior setter.