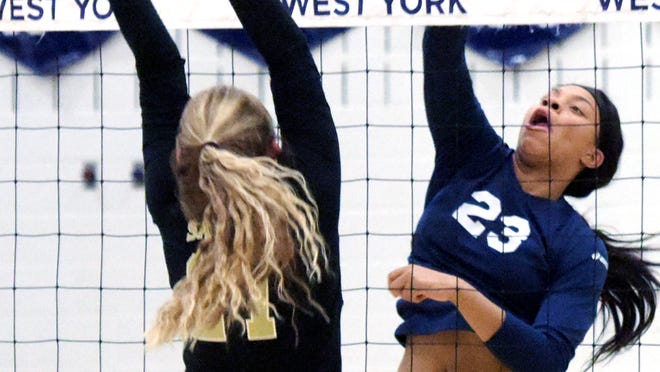 Like many other teams, the players on the West York girls’ volleyball squad wear warm-up shirts that have a motto on their backs.

For the Bulldogs, that motto simply says: "Some wish for it, We work for it."

That slogan was never more appropriate than on Tuesday, Oct. 31, when the ‘Dogs played host to Berks Catholic in a District 3 Class 3-A quarterfinal contest.

After rolling to a relatively easy win in Set 1, the Bulldogs were out-worked by a feisty Saints side in Set 2 and Set 3 to fall behind in the match, 2-1.

West York, the No. 2 seed in the district draw, will take on Lower Dauphin in the semifinals Thursday at a site and time to be determined. The Falcons ousted Spring Grove, 25-22, 25-21, 25-15, in another quarterfinal played at West York High School.

“At the end of the day, I think the girls wanted the (final) point,” West York coach Joe Ramp said. “I told them ‘don’t want the point, go earn the point.’ And there’s a difference.”

Ramp felt that too often during Set 2 and Set 3 that his team was wanting it more than earning it. Against a team such as Berks Catholic, which won the District 3 3-A title a year ago, that way of playing proved costly time and time again.

“I think, at times, they were just wishing that they (Berks Catholic) would just fall over,” Ramp said. “And that they would just give us all these points and that’s not something that’s going to happen.”

The Saints (12-6) were able to effectively disrupt the Bulldogs' ability to set their one-two middle combo of sophomores Tesia Thomas and Alayna Harris. The West York serve-receive had troubles passing the ball, which effectively limited the home team to setting just their outside hitters.

The turnaround: Things didn’t turn around for the Division II champs until they figured out some of their issues off the serve. Once they did, Thomas (20 kills) was getting the ball and putting it away with regularity.

Perhaps it was a coincidence, but it was Thomas who put the final point away that allowed Ramp and his team to breathe a huge sigh of relief.

“I wanted it to be a banger,” Thomas said. “But I realized it wasn’t there and that I have to take what the ball gives me. I didn’t think it was going to be the (final) point. I was just more worried about getting it in and helping out my team.”

The situation was similar to what the Bulldogs (21-1) experienced a week ago in the York-Adams League playoffs. In the opener against Dallastown, the ‘Dogs trailed 2-1 in the match before rallying back to victory.

The difference, however, was that Tuesday’s contest was a win-or-go-home affair. Only the top three teams in districts qualify for the PIAA tournament. Now that the Bulldogs are in the semifinals, a victory over Lower Dauphin (16-2) will assure them that the season will continue into states.

“We all worked so hard to get here,” Thomas said. “And I didn’t want to give it up that easily.”

Rockets swept: While the Bulldogs will move on, the Rockets were unable to find a way to better a Lower Dauphin squad that entered the district draw as the No. 3 seed. Spring Grove put up a big fight in Set 1 and Set 2 before things collapsed in Set 3.

“They are very talented,” Spring Grove coach Liz Zeigler said of Lower Dauphin. “But I didn’t think that we played as together as we should. And our body language was not as positive as I would have liked.”

Kaylyn Zeigler led the Rockets with 10 kills and 11 assists. Hailey Marcionette finished with 11 digs and 16 assists for Spring Grove (13-7).

York Catholic 3, Linville Christian 0: At Lancaster Mennonite, the Fighting Irish swept to a District 3 Class 2-A quarterfinal triumph over previously unbeaten Linville Christian. No. 5 seed York Catholic improved to 14-5, while No. 4 seed Linville finished at 13-1. The Irish will next face top-seeded Trinity (19-2) at a site and time to be determined on Thursday, Nov. 2, in the semifinals. Trinity had a bye in the quarterfinals. Emily Hoffman (nine kills, five digs), Abby Pilkey (nine kills), Bella Kepner (11 digs, six kills), McKenna Walker (22 digs) and Megan Daugherty (25 assists, seven digs, four kills) were the statistical leaders for the Irish.