EMIGSVILLE — Sometimes adversity is a good thing for a talented team to taste every once in a while. 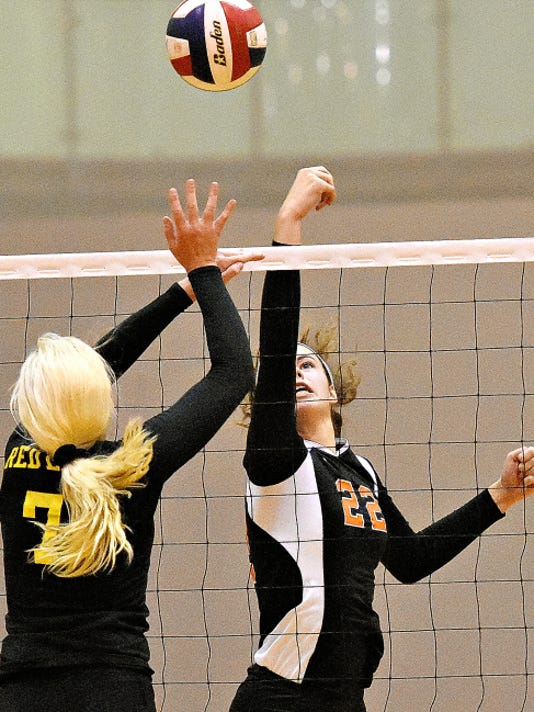 EMIGSVILLE — Sometimes adversity is a good thing for a talented team to taste every once in a while.

The Central York girls' volleyball team certainly got a heavy dose of that Wednesday night when it battled York-Adams Division I rival Red Lion.

The Lions knocked off the Panthers during their first go-round a year ago, the only loss that Coach Nate Ocasio's club tasted en route to a Division I title. It seemed as if history might repeat itself after the visitors raced out to a 2-1 lead in the best-of-five match on Wednesday.

Central, however, has a nice blend of talent, experience and, most importantly, resiliency — something the Panthers had to display on many occasions. Led by big nights from Emily Poole (15 kills), Alison Rife (10 kills) and Kamryn Stambaugh (nine kills, five blocks, seven digs), the Panthers erased the deficit by capturing Game 4 rather easily.

Both teams entered the night with perfect 4-0 records in York-Adams Division I.

"It was a good night," said Poole, who was asked to homecoming moments after the game concluded. "A little stressful, but it was good."

Poole and company had to demonstrate a similar resiliency a week ago against South Western. In that contest the Panthers trailed late in Game 2 and Game 3 before rallying back to sweep the Mustangs.

"We're confident in ourselves as a team to come back," Poole said. "From being down, (we know how to) pick it up and do what we need to do to win."

While the Panthers can feel good about themselves after a thrilling triumph, the Lions have no such luxury. Forced to move the game up a night because of their own homecoming festivities Thursday, the visitors appeared in good shape to leave Emigsville with a signature victory.

The Lions were getting put aways by girls other than returning all-state outside hitter Lindsey Blevins (12 kills, 11 digs, four aces). Logan Dontell slammed down 10 kills for Red Lion, while Lauren Enfield finished with six to provide a nice balance for Coach Heather Schoemaker's club.

"We have multiple players that can do multiple things for us," said Schoemaker, who is in her fourth year as Red Lion's head coach. "If we can learn to execute our game plan a little more, we'll be more successful in the long run."

The visitors either led or were tied for much of Game 5, including a 13-11 lead late. But Poole smacked home a winner to draw her team within 13-12 before setter Emma Saxton served an ace to even the score. Knowing that the Lions would set up Blevins every chance they had, the Central defense was able to block and dig her kill attempts before the Red Lion standout hit a ball out of bounds. The Lions evened things up again at 14-14, but couldn't put away the Panthers, who won the final two points to claim victory.

"I play with Lindsey in the offseason, so it's always competitive with me against her," said the 6-foot, 1-inch Poole, a Lehigh University recruit.

Red Lion setter Rachel Groff dished out 33 assists to go with a team-best 14 digs, while Saxton paced the Panthers with 40 assists, 15 digs and four aces.

Garden Spot 3, Susquehannock 0: At New Holland, the home team rolled to a 25-15, 25-23, 25-21 victory over the York-Adams Division II co-leader. Kelly Franz had 12 assists for the Warriors, while Gabby Ogude collected seven kills. Garden Spot improved to 7-0.