EMIGSVILLE — A season after winning its first York-Adams Division I title since 1985, Central York girls'... 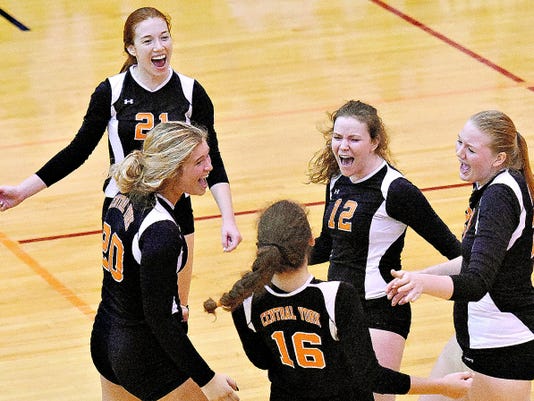 EMIGSVILLE — A season after winning its first York-Adams Division I title since 1985, Central York girls' volleyball coach Nate Ocasio wasn't overly worried about having to replace a number of outstanding hitters, as well as his setter, in 2015.

It's easy to see why after his team played host to South Western in a divisional clash Thursday night at Central. Setter Emma Saxton looked comfortable pacing the Panthers' offense, which had a couple new faces putting away balls.

Oh yeah, it helps to have Division I-bound senior middle hitter Emily Poole on the court, as well.

Coincidentally, those three also proved to be some of the new faces who the Panthers are breaking into their starting lineup this season. Stambaugh actually led Central with six kills on the night, while Gallagher added four.

The fact that Poole finished with just two kills only further demonstrates the variety of options that Saxton felt comfortable choosing to get the ball to on the attack.

"With any pass I can just trust my hitters to just kill it," Saxton said. "And that's good, because the other side doesn't know who to block because it's pretty much anybody that can put it away."

Filling in for Julia Terpak, who was a second-team all-star in the York-Adams League a season ago, Saxton felt some pressure heading into the season. But Ocasio and his assistant coaches helped alleviate some of that.

"(We) have a good coaching staff," said Saxton, who dished out 16 assists. "They kind of took the pressure off by making sure that I got many reps (in practice) to feel comfortable."

After coasting to a relatively easy victory in Game 1, the Mustangs made the Panthers work for things in the following two games. South Western staked a 17-9 advantage in Game 2 behind a service game that gave the home team some trouble. Seniors Tori Sager and Hannah McMaster tallied a couple aces during the Mustangs' run that broke up an 8-7 contest.

"That's to be expected sometimes in volleyball," Ocasio said. "Give credit to South Western. They did a good job of picking spots and not just serving right at us."

The defending division champs recovered just in time to avoid disaster. Gallagher and Saxton served their side back into the game with long runs. Saxton's run actually helped her team tie up the score at 21-21 before Stambaugh finished off a 3-0 run with an ace.

It was a similar script in Game 3. The visitors appeared to be in prime position to force a fourth game. Trailing 22-15, the Panthers stormed back late, and staved off a pair of a game points, before Stambaugh closed out the match at the service line with an ace and a big kill from Gallagher to finish it off.

"I think we just have to bring more energy throughout the games," Saxton said of her team's lulls. "We sort of lost energy in the middle, but in the end we kind of just bring it."

Rishel led the Panthers with 12 digs, while Stambaugh and Laura Fahs combined for seven aces. Sager led the Mustangs with seven kills, while Summer Small and Bonna Sheehan each added six.

Delone Catholic 3, York Catholic 0: At McSherrystown, Kate Laughman led the Squirettes to the 25-11, 25-9, 25-13 win with 18 assists, six aces and five digs. Teammate Amber Johnson had five kills. For the Irish, Maddie Kepner had 15 digs, while Izzy Williams and Rachel Shelley each had four kills. Delone won the JV match, 25-8, 25-23.