York Catholic, Kennard-Dale to face off for District 3 Class 2-A girls' lacrosse crown

York Catholic, Kennard-Dale to face off for District 3 Class 2-A girls' lacrosse championship.

York Catholic, Kennard-Dale to face off for District 3 Class 2-A girls' lacrosse crown 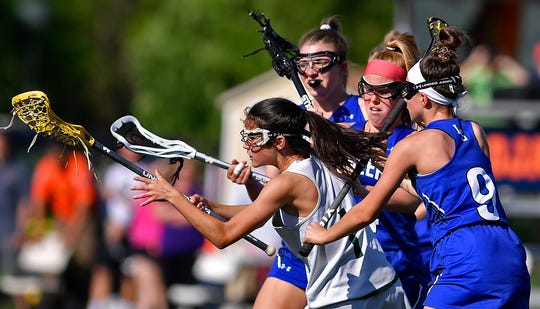 HERSHEY — Despite enjoying plenty of success over the past five years, the York Catholic girls’ lacrosse program was missing one key accomplishment.

Monday evening, the Irish finally crossed off that big item on their bucket list.

Taking on Lampeter-Strasburg in a District 3 Class 2-A semifinal at Hershey High School, the YC girls stormed out to an early lead against the Pioneers. Despite a second-half surge from the L-S girls, the Irish (20-1) were able survive and advance to the program’s first-ever District 3 2-A title game after completing a 15-8 triumph. 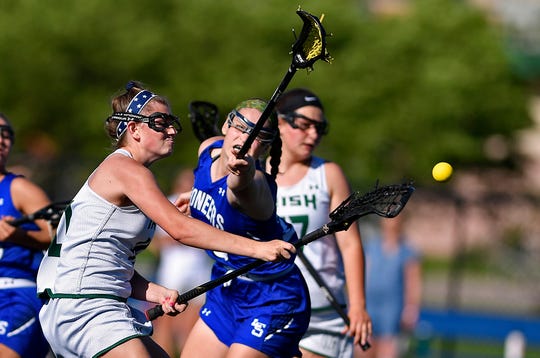 Sydney Mentzer of York Catholic shoots and scores against Lampeter-Strasburg during the District 3 Class 2-A girls' lacrosse semifinal, Monday, May 20, 2019. John A. Pavoncello photo (Photo: The York Dispatch)

“I’m just thrilled to get out of here with a win,” YC coach Rob Linthicum said. “We’ve never been to a district championship game before and I’m just looking forward to it.”

The semifinal tilt was a rematch between the two squads from earlier this season. Back in late March, the Irish claimed a satisfying 19-14 triumph.

Linthicum and his squad learned from that contest to beware of L-S standout Kelsey Kimmel. The Penn State University recruit scored nine goals in that first meeting, but she was limited to three tallies Monday.

“We knew what we were up against,” Linthicum said.

No. 4 seed L-S (14-6) was also without goalie Mary Peticca in that early-season battle. Peticca, a University of Massachusetts recruit, was back in the pipes for the Pioneers Monday, but she had trouble early on. The Irish scored on their first five shots to quickly take a 5-0 lead.

Eckert, who scored five times in the victory, tallied two goals during that run.

“We knew that we really had to move the goalie,” Eckert said. 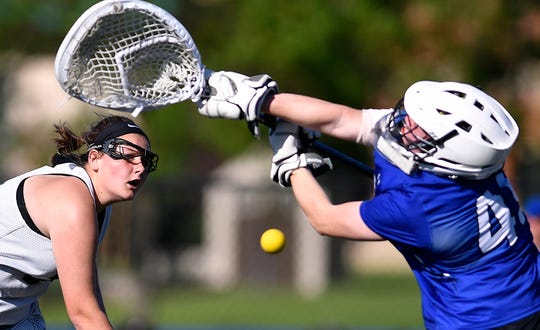 York Catholic's Ella Linthicum attempts to get a shot past Lampeter-Strasburg goalie Alexis Garrett during the District 3 Class 2-A girls' lacrosse semifinal, Monday, May 20, 2019. John A. Pavoncello photo (Photo: The York Dispatch)

Playing in temperatures that reached the mid-80s, the Irish suffered a bit of a lull midway through the second half. The Pioneers rallied to pull within 11-7 with just under 13 minutes to go.

“The heat was a bit of a problem,” Eckert said. “And playing on turf just makes it all worse. And we don’t have a really big bench, but I think there was a bit of fatigue.”

Much like she did all game, Eckert came up with a big goal to end a late L-S run with 6:50 left. Teammate Natalie Neiman, who finished with two goals to go with four assists, scored on the ensuing possession, which gave Linthicum and his team a much-needed cushion.

Now the Irish will look forward to playing for a title come Wednesday. Linthicum and his team wanted another crack at the Rams, who handed the Irish their only loss of the season in the Y-A League playoff final. YC beat K-D during the regular season.

“Yep, we do,” Eckert said when asked if she and her teammates wanted another shot with K-D. “We want redemption.”

Now, the Irish will get that chance.

Rams hold off late surge: After taking a 12-7 lead with 14 minutes left in regulation, the Rams felt the momentum shift toward the Eagles (15-6). A run of three-straight goals from Cocalico cut the deficit to just two with 6 minutes, 22 seconds left on the clock.

That advantage shrunk to one after the Rams failed to capitalize on a possession with 3:17 remaining. With just under two minutes left, the Eagles scored what turned out to be the final goal of the night.

The Rams held on in large part because of the terrific play in net by Maria Schneider. The K-D goalie made several big stops, including one with under 30 seconds left on the clock. 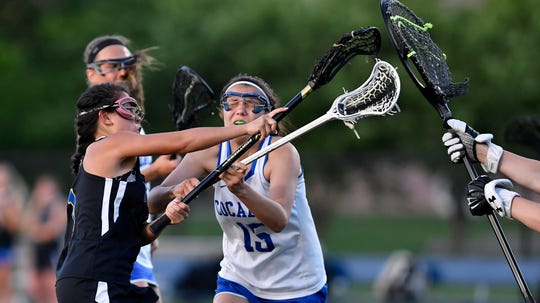 “It was pretty crazy,” said Schneider, who finished with 14 big saves for the evening. “We’ve been in this situation several times, in several big games, where it’s just one or two goals. And it’s always so crazy, but I have so much trust in my teammates.”

Schneider made a huge stop to gain possession late, but a crease violation by K-D gave the Eagles the ball back with 20 seconds left. The Rams forced a turnover that Schneider pounced on. The K-D goalie ran out the final seconds before celebrating with her teammates.

“I just don’t ever get down in those situations,” Schneider said. “Because I just know that everyone is working just as hard as they can.”

Now the Rams will have a chance to win another District 3 title come Wednesday when they take on their “frenemies” from York Catholic.

“I’m so excited,” Schneider said. “It’s just awesome because we’re friends with so many of them and we play them like 10 million times. It never gets old.”

Kennard-Dale's Megan Halczuk takes a shot on goal against Cocalico during the District 3 Class 2-A girls' lacrosse semifinal, Monday, May 20, 2019. John A. Pavoncello photo (Photo: The York Dispatch)