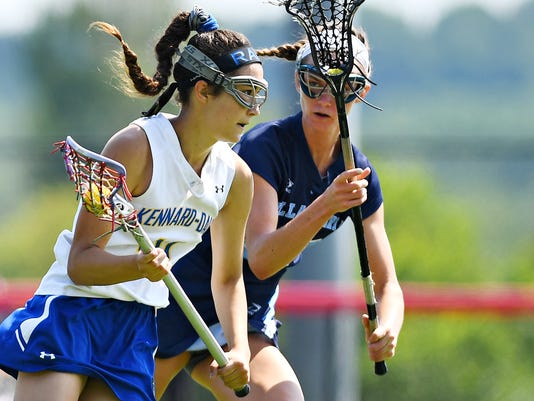 WEST CHESTER — The Kennard-Dale girls’ lacrosse team knew what it was going up against in Saturday’s PIAA Class 2-A state title game against District 1 champion Villa Maria Academy.

Like most powerhouse programs in District 1, the Hurricanes have all the pieces of a championship-caliber squad — size, speed, skill and depth.

The Rams, who advanced to the state title game for a second season in a row, have those same things as well, but not in as much quantity.

While it's clear that the York-Adams League champs are making strides in closing the gap with the teams from District 1, it was also clear Saturday that there still remains a divide.

Villa Maria set the tone for the contest right away when Villanova recruit Abby Walheim won the opening draw before finding teammate Hannah Young for the game’s first goal a mere 10 seconds into play.

Despite scoring on the ensuing possession to even the score, the Rams were unable to keep pace. Villa Maria finished the half on a 9-1 run to take control before clinching the school’s first-ever PIAA title with a 17-5 triumph.

Seeing the big picture: For the second year in a row, the Rams (21-5) settled for the PIAA 2-A runner-up trophy. While that was certainly not the trophy they were hoping for Saturday, the K-D girls see the big picture.

“Sure, we did lose, but this was our second year in a row here,” K-D junior Megan Halczuk said. “We’re the only York County team to ever come out here, so that’s amazing. That’s a gift.”

Walheim leads Villa Maria: An All-American as well as an NCAA Division I Winthrop recruit, Halczuk has been a big part of Kennard-Dale’s success the past two years. Saturday, Halczuk was able to get a taste of what will come when she gets to college. She squared off frequently with Walheim on the draws.

“(Walheim) on the draw was the key,” K-D coach Kelly Wetzel said. “And even when we could get it from her, it still wasn’t easy.”

Walheim (one goal, three assists) won the majority of the draws against Halczuk by using her 6-foot-plus frame to out-muscle and out-reach Halczuk.

“She’s really tall, so she has a lot of advantages,” said Halczuk, who won four draws. “And she can really jump and she was able to self-draw and get up for it. I just learned that you have to get the ball away from her, otherwise she can just get it every time.”

Villa Maria pulls away: Walheim’s prowess on the draws helped the Chester County school quickly regain the lead after Maddie Day (two goals) tied it 37 seconds after Young’s tally. The Hurricane junior won the next two draws which resulted in goals to make it 3-1.

Villa Maria (23-2) extended the advantage to four goals (5-1) before Morgan Bowings (two goals) found the net with just more than 13 minutes left in the first half. The Rams, however, wouldn’t score again for another 14-plus minutes, when Bowings scored to cut the Hurricane lead to 11-3.

“They were fast across the board,” Wetzel said. “They used both their hands like it was regular for them and their goalie played well. Even when we got some shots they made the plays.”

Schneider a bright spot: One bright spot for the Rams was the play of goalie Maria Schneider, who recorded six saves. The K-D sophomore was able to keep the game from becoming a complete blowout by making some impressive stops.

“That was pretty crazy,” Schneider said of the Hurricanes. “We knew coming in that they were so talented. We didn’t necessarily make it a goal of winning, but just playing our best and showing that we deserved to be here. I’m just proud that we, as a team, didn’t give up at all.”

Aiming for return to state final: While the Rams were hoping to capture the program’s first-ever crown while simultaneously giving head coach Kelly Wetzel his 200th career coaching victory, the K-D girls will take what they learned from the experience in the hopes of making it three-straight state title game appearances next year.

“You just have to stay strong,” said Halczuk, who finished with an assist. “We have to keep our confidence. We only lose four seniors, but only two of them (Day and Bowings) are really a big deal for the team. Hopefully we’ll keep it together.”

Erin Finley led Villa Maria with four goals while Hannah Young and Sarah Delaney each tallied three apiece. Jenna Soukaseum recorded a goal in the final minute of action for the Rams.