Programs owning 17 state titles and 75 District 3 crowns will be on display on Saturday for a girls' basketball showcase at York Catholic.

After a rough loss to Northeastern on Friday, Central York bounced back with a home win over York High on Tuesday. York Dispatch 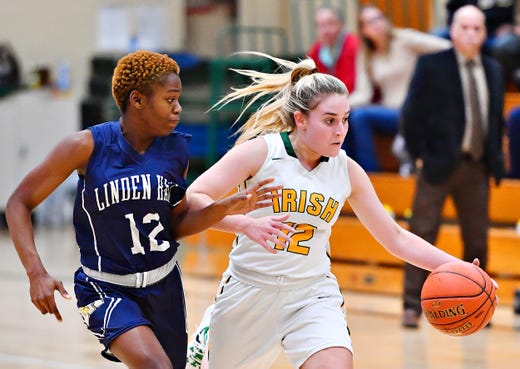 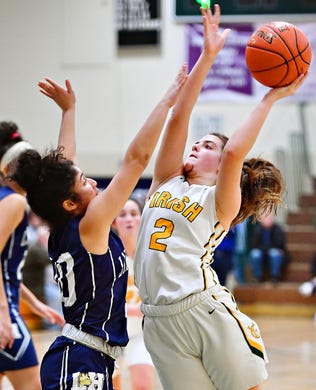 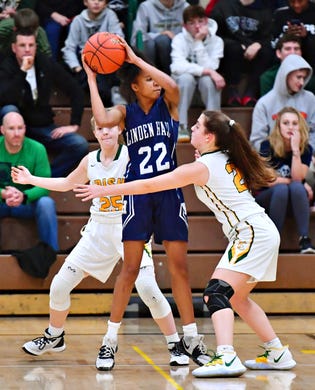 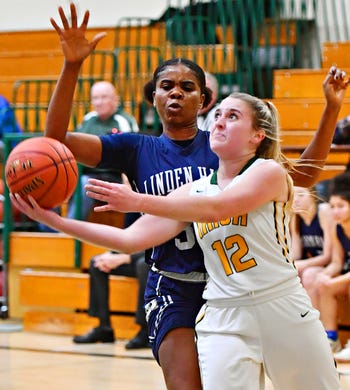 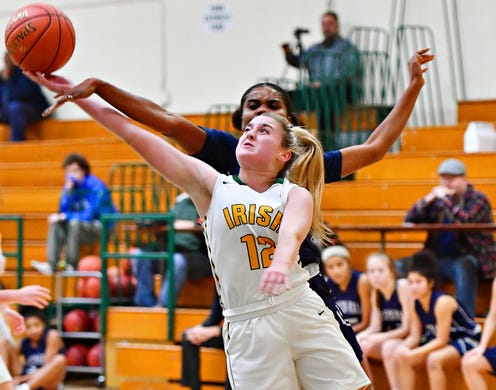 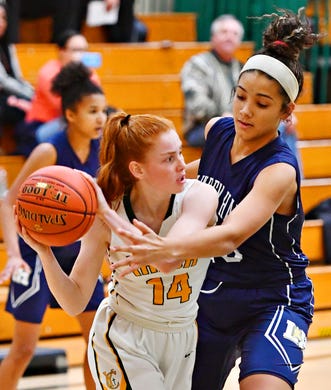 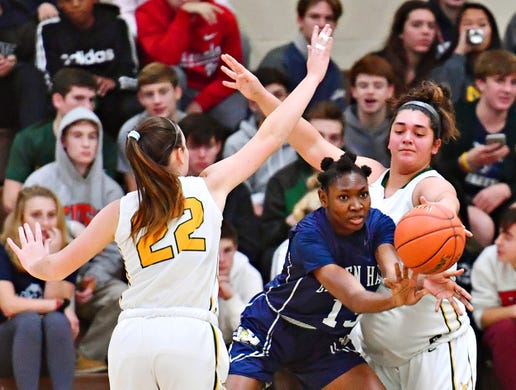 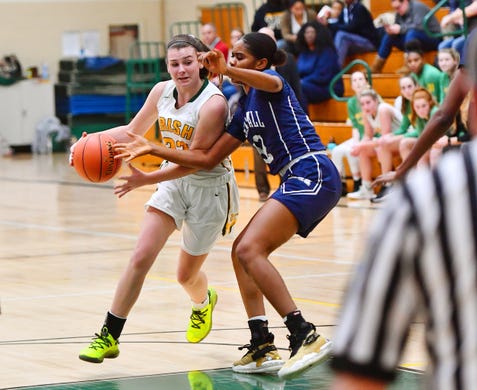 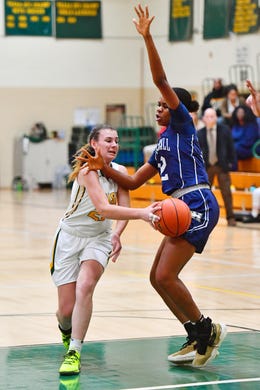 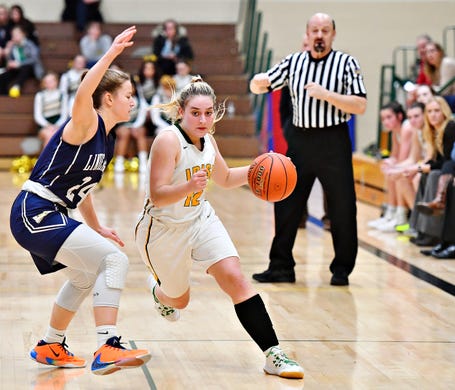 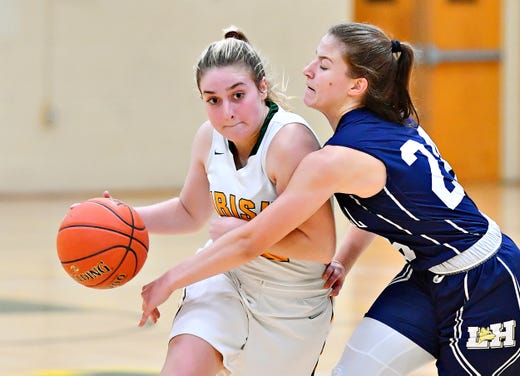 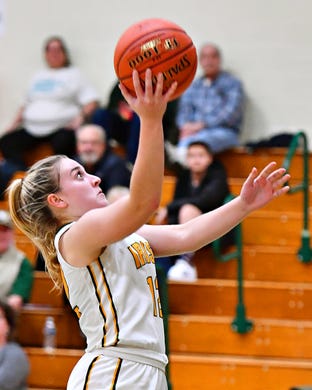 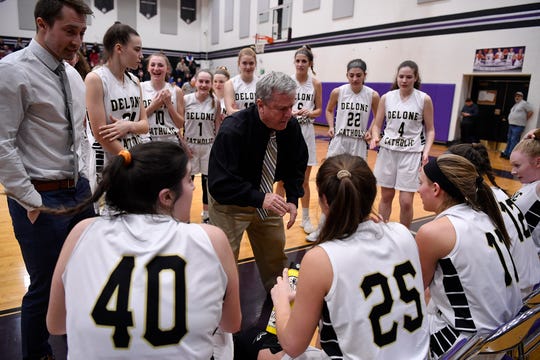 That's the girls' basketball pedigree that will be on display at York Catholic High School on Saturday.

The school on Springettsbury Avenue will host a showcase featuring eight parochial powers and four games, starting at noon and likely ending a little after 6 p.m.

Seven of the eight teams will enter the event with winning records, including an undefeated team that just happens to be a defending state champion. That would be Gerry Eckenrode's Delone Catholic team, which sits at 11-0 after winning the PIAA Class 3-A crown a season ago. That was Eckenrode's fourth state title at the McSherrystown school. This year's Squirettes are ranked No. 1 in the state in 3-A.

Golden girls: Of course, most of the programs in the field are no strangers to having state gold medals hanging around their necks. Dating back to 1974, Delone, York Catholic and Lancaster Catholic each boast four state crowns, while Lebanon Catholic has three and Trinity has two.

When it comes to District 3 championships, Lebanon Catholic leads the way with 20, followed by Lancaster Catholic (18), Trinity (15), York Catholic (13) and Delone (four). One of the other teams in Saturday's showcase is Bishop McDevitt from Harrisburg, which owns five District 3 crowns.

Schedule of games: Lancaster Catholic (9-1) opens up the event vs. Trinity (6-3) at noon. The Crusaders' only loss this season came to an undefeated Bermudian Springs team in the season opener. Lancaster Catholic won a state title as recently as 2018, and both teams won district crowns a season ago — Lancaster Catholic in 4-A and Trinity in 3-A.

That will be followed by Berks Catholic (7-2) vs. Delone Catholic at 3:15 p.m. Berks has lost to just one PIAA foe this season.

York Catholic (5-7) battles Lebanon Catholic (7-6) in the finale, scheduled to start at 4:45 p.m. The Beavers play for legendary coach Patti Hower, who is in her 42nd year and has compiled more than 700 victories. She led Lebanon Catholic to a state title as recently as 2017. 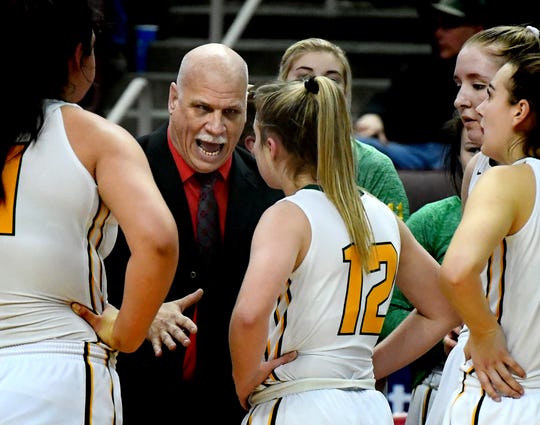 Irish gaining momentum: The host school is the only team in the event with a losing record, but the Lady Irish have played a rugged schedule thus far and appear to be gaining momentum as the season progresses, which is pretty typical for a Kevin Bankos-coached squad. They had won two straight before suffering a 50-47 overtime road loss to Berks Catholic on Wednesday night.

Admission to the showcase is $5 for adults and $3 for students, which is good for all four games.

Northeastern (9-3 overall) is also 4-1 in the division. The Bobcats are at Red Lion (5-6, 2-4) on Friday. If things break right for Northeastern (namely, a win vs. Red Lion, along with Dallastown and York High wins), it could find itself alone in first when the dust clears on Friday night.

Of course, winning at Red Lion is no certainty. The Lions gave Dallastown a decent battle on Wednesday before falling, 45-40, and have one of the top players in the league in Davante Dennis. Northeastern, meanwhile, will look to bounce back after a disheartening 78-62 nonleague road loss on Wednesday to a Manheim Twp. team that entered at .500 (6-6).

Dallastown is coming off a disappointing loss to rival Red Lion on Wednesday, 46-32. The Lions (11-1) are the only remaining unbeaten team in D-I at 6-0.

The loser of Friday's Dallastown-Central contest will find itself two games back in the loss column in the D-I race.