The Delone Catholic girls pulled off a stunning upset on Thursday night, beating Dunmore 49-43 to win in the PIAA Class 3-A state championship game. 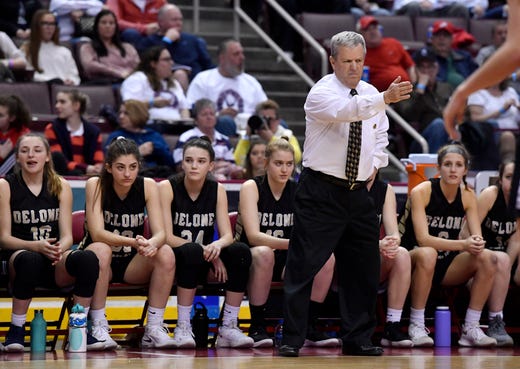 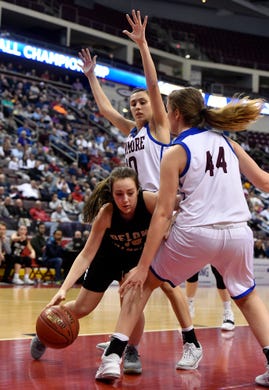 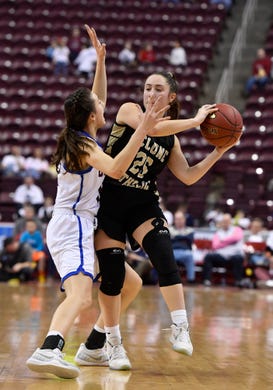 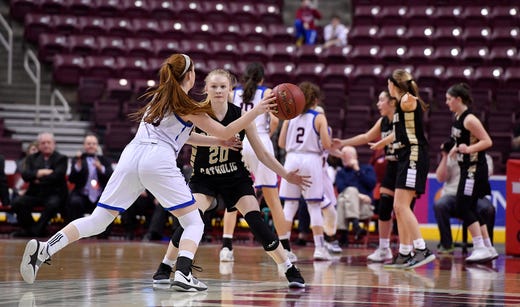 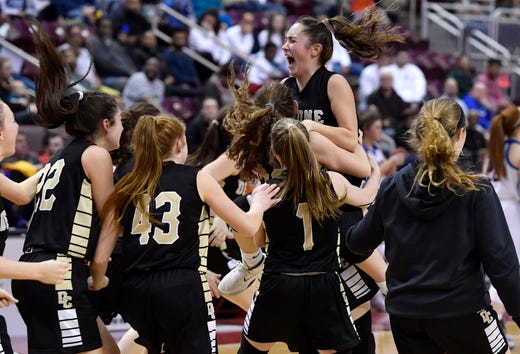 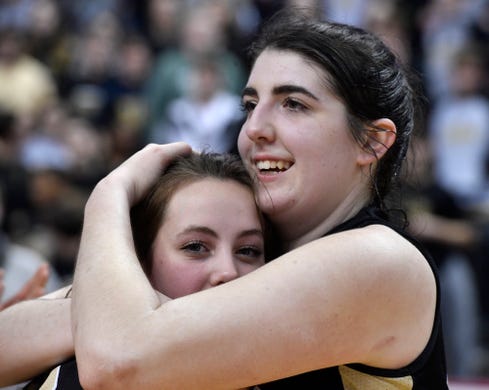 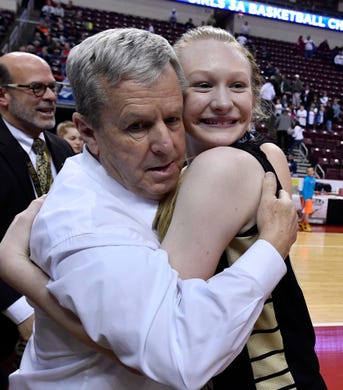 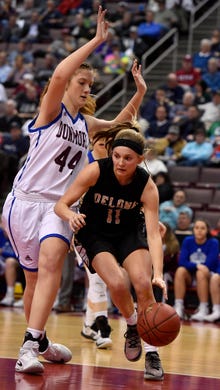 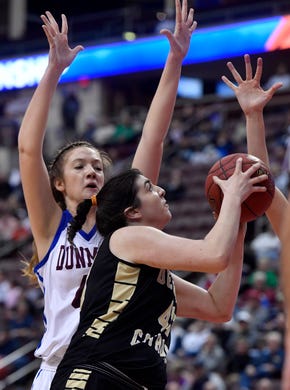 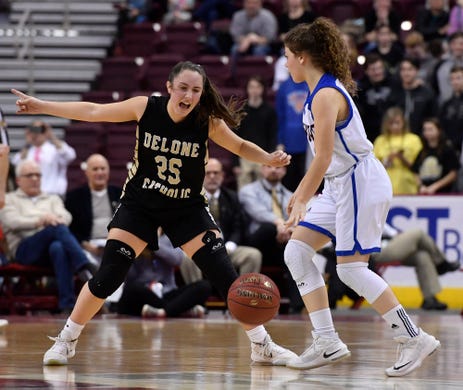 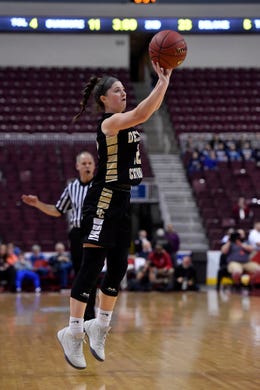 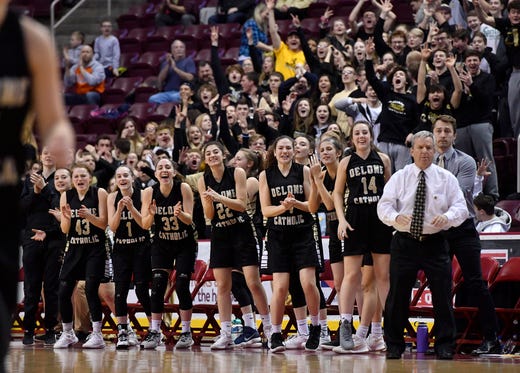 The Delone Catholic bench reacts as the Squirettes open their lead on Dunmore during the PIAA Class 3-A girls' basketball championship, Thursday, March 21, 2019. John A. Pavoncello photo The York Dispatch
Fullscreen 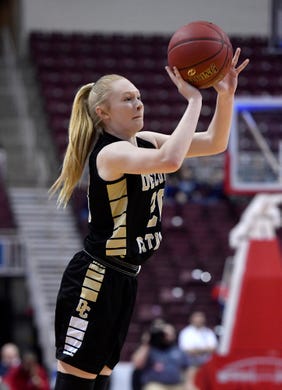 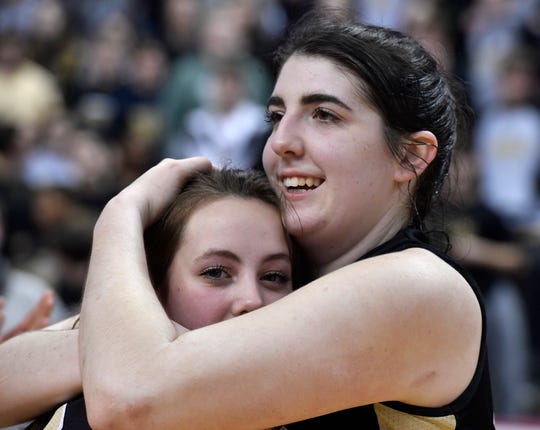 That was the bold statement that Delone Catholic girls’ basketball head coach Gerry Eckenrode wrote on the white board in the locker room at the high school before Thursday’s PIAA Class 3-A state title contest.

Whether or not he really believed what he wrote may be up to some debate, but there is no debating how prophetic it was.

Entering as decided underdogs against a team that seemed destined to cap a terrific season with the school’s first-ever state title, the Delone girls played undoubtedly their best game of the season on the biggest stage. Led by big nights from Brooke Lawyer (20 points) and Bradi Zumbrum (11 points), the Squirettes took the lead early and never looked back in a thrilling 49-43 triumph at Hershey's Giant Center. 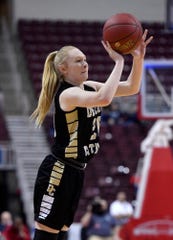 "This was beyond my wildest dreams," Eckenrode said of his team's unexpected victory. "I can't think of any (other wins) more unexpected than this."

Giant Center redemption: The Delone girls, who played arguably their worst game of the season in the District 3 final opposite Trinity at the Giant Center, were able to completely turn things around in their second chance at the Hershey arena.

Almost everything that went wrong in the district title game went right the second time around in Hershey.

"It was the best feeling ever," Lawyer said. "Definitely the highlight of our season."

Much of the credit for the team's preparedness goes to Eckenrode, who burned the midnight oil every night since the team's victory Monday in the state semifinals to get ready for an unbeaten team that was the consensus No. 1 team in 3-A.

“I watched them on tape and I just felt like nobody really went after them,” Eckenrode said. “We came up here with a game plan to pressure the ball, make them make their entry passes from the outside and we did a good job of that.”

Lawyer, who failed to score a point the last time DC played at the Giant Center, connected on better than 50 percent of her shots (8-of-15) while Zumbrum, who scored just four points back then, showed off why the York-Adams League Division III coaches voted her the division player of the year, going 3 for 5 from the field and 5 for 6 at the foul line. Both Lawyer and Zumbrum had six rebounds. 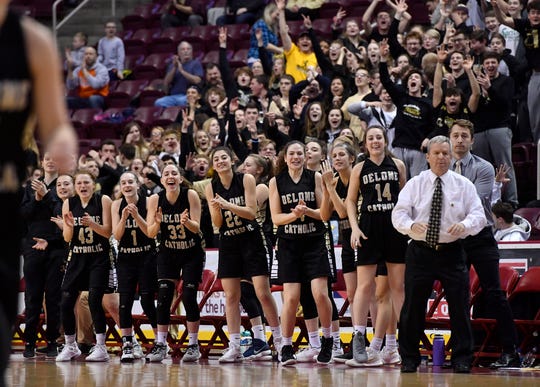 The Delone Catholic bench reacts as the Squirettes open their lead on Dunmore during the PIAA Class 3-A girls' basketball championship, Thursday, March 21, 2019. John A. Pavoncello photo (Photo: The York Dispatch)

“We called it a Hershey hangover then,” she said. “And (tonight) we had a Hershey high.”

Squirettes' stellar start: The Delone girls trailed for just under a minute all night. After Dunmore standout Victoria Toomey converted a layin to put the Bucks up 2-0 two minutes into play, the Squirettes rebounded with four straight points.

Dunmore freshman standout Moriah Murray tied it up at 4-4, but Lawyer, who missed on all of her attempts in the District 3 title game, knocked down the first of her four 3-pointers with 3:03 left in the first quarter.

“We just shot the ball much, much better tonight than we did against Trinity,” Eckenrode said. 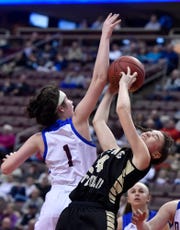 The Delone girls were able to stretch the lead to double digits midway through the second quarter when the Bucks were battling through their own shooting woes. The Squirettes were able to finish the first half on a 15-1 run to take a 27-12 lead into the locker room.

Dunmore rallies: The lead grew to as big as 23 points (35-12) before the District 2 champs mounted a furious rally. Led by their big two in Murray and Toomey, the Bucks pulled within six points (40-34) midway through the fourth quarter.

"We knew they were going to keep fighting," Zumbrum said. "They weren't just 29-0 for nothing."

Just as they have done all during their PIAA playoff run, however, the Delone girls were able to close things out with solid passing, clutch free throw shooting and relatively error-free ball.

Freshmen excel: Major kudos were dished out by Zumbrum and Lawyer to the team's talented freshmen, such as Camryn Felix and Giana Hoddinott. Hoddinott (seven points) blanketed Murray throughout the night, while Felix (eight points) was a primary ball handler against Dunmore's pressure. Felix also knocked down 5 of 6 free-throw attempts in the fourth quarter.

"Starting two freshmen is never easy, but it was what had to be done," Zumbrum said. "They (both) played great."

"Camryn did an outstanding job of handling the basketball," he said. "Giana has been a warrior for us on defense. And Maggie Hughes comes in and spells us with some valuable minutes for Bradi, Riley (Vingsen) or Brooke. They played well."

No. 4 for Eckenrode: Eckenrode, meanwhile, has coached well, according to Zumbrum. While the Delone boss is certainly an "old-school" type, he's adapted to his players enough to earn a high mark from Zumbrum.

"If he wasn't here, we wouldn't have won," Zumbrum said. "It doesn't matter if we had the five best players in the state. I mean he spends so many sleepless nights just watching film. It's insane. I mean the man gets all the credit in the world." 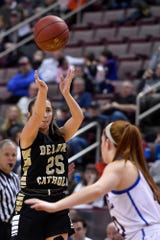 Eckenrode, who coached the Delone girls to three-straight PIAA titles from 2003-2005, never thought that he would get another crack at winning a fourth title. Especially not this year after the team dropped games in the York-Adams League playoffs to Gettysburg and in the district final to Trinity, a team that Dunmore crushed in the state semifinals.

"The first (state title) was a surprise, but this was definitely a surprise," he said. "I mean this came out of nowhere. I don't know ... it's just that the kids caught fire and got it done.

"I never thought that we would ever get back here. Back in 2005, I just kept saying to myself that I just need one more ... I just got to get one more. And now I got it."