After going undefeated for the first time in nearly 60 years, York Suburban's stellar season ends in the district quarterfinals.

After a first half that went nearly as poorly as possible, a surge coming out of the locker room gave York Suburban (10-1) the ball down by three points with momentum on its side after forcing a crucial turnover on downs.

The Trojans handed the ball to the player who led them to their first undefeated season in nearly 60 years, senior running back Savion Harrison. The 2019 York-Adams League Division II Offensive Player of the Year fumbled and Lampeter-Strasburg recovered the ball and the momentum. 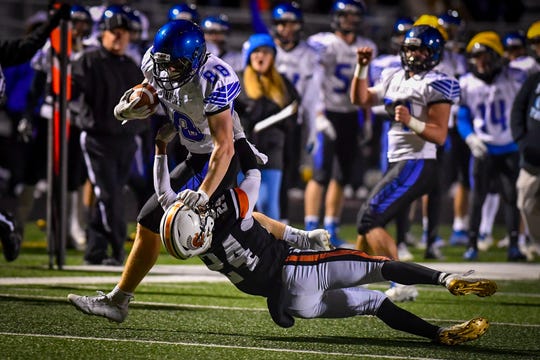 The Pioneers’ scored a touchdown on a run by quarterback Conner Nolt a few plays later and secured the 27-18 victory for L-S (9-3) in a District 3 Class 4-A quarterfinal game. 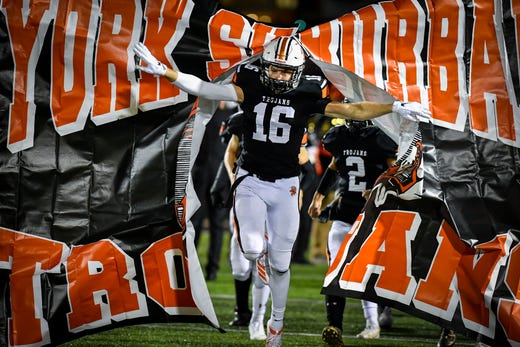 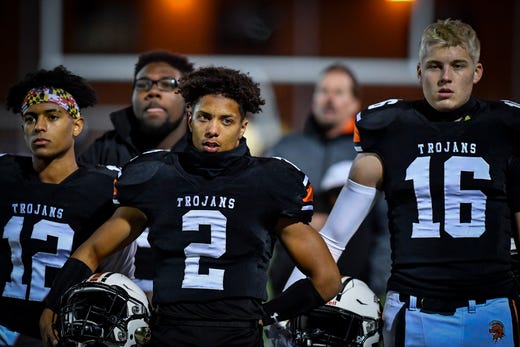 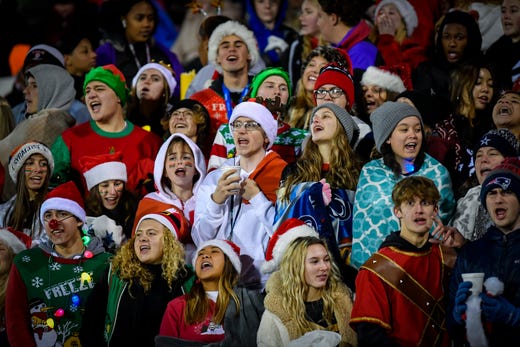 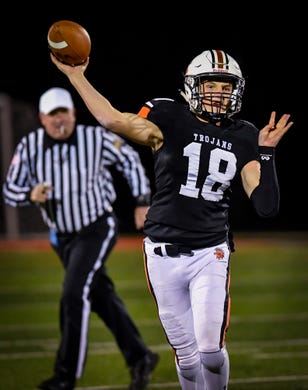 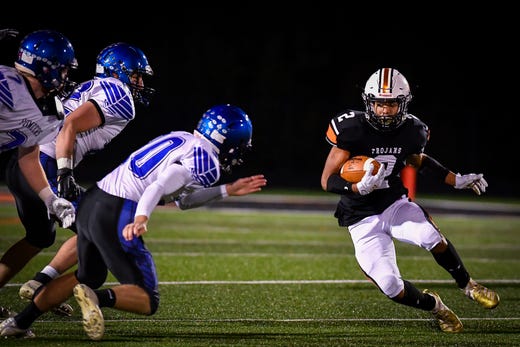 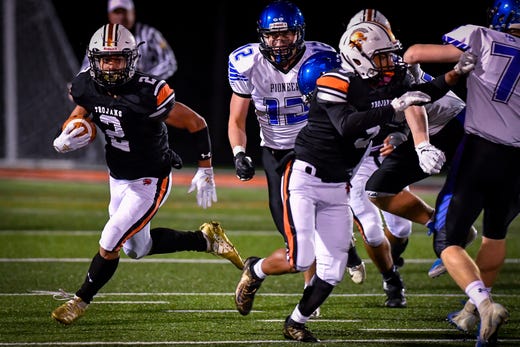 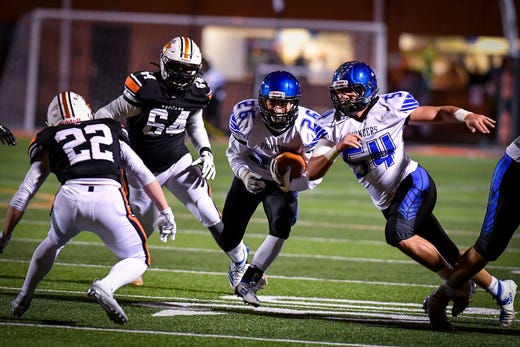 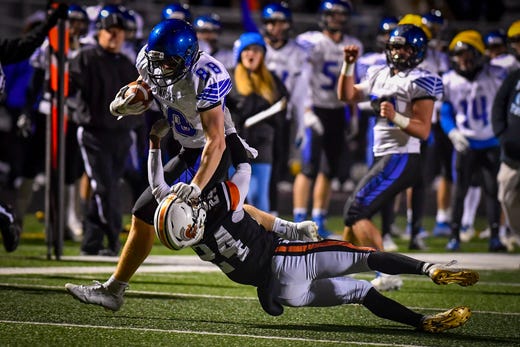 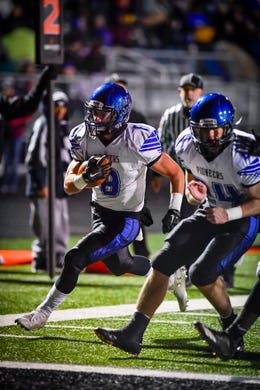 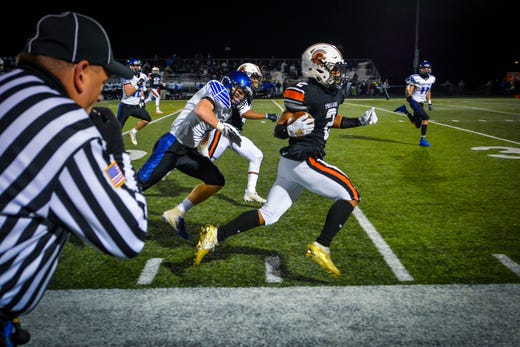 Savian Harrison of York Suburban sprints down the sideline for yardage against Lampeter-Strasburg during the District 3 Class 4-A quarterfinal, Friday, November 8, 2019 John A. Pavoncello photo The York Dispatch
Fullscreen 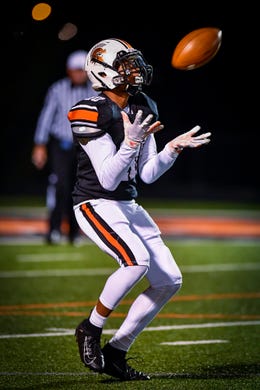 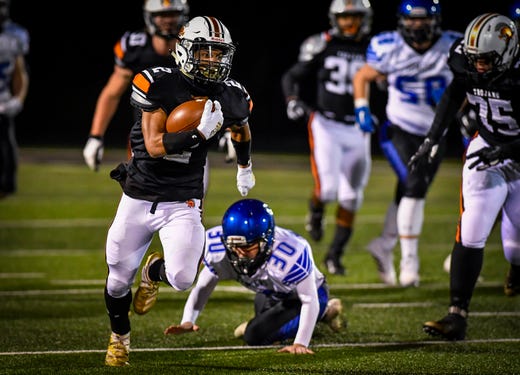 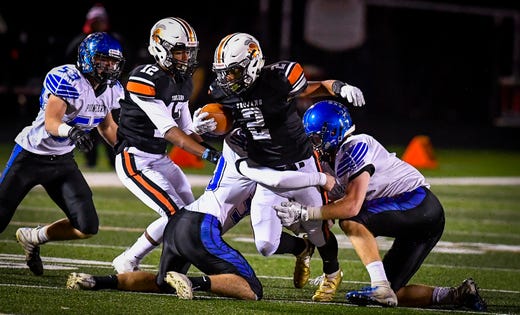 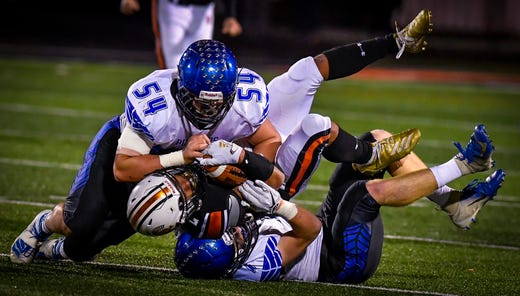 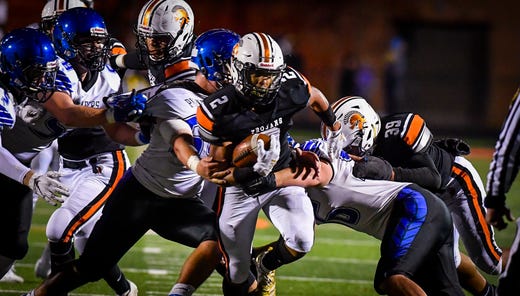 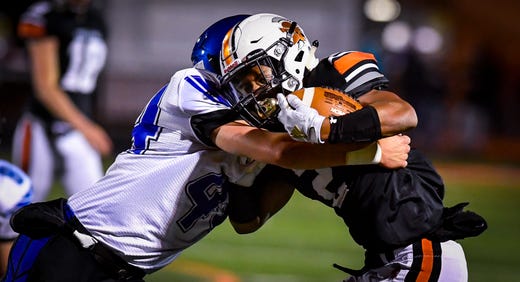 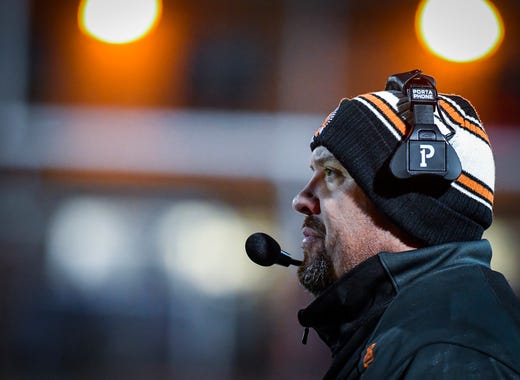 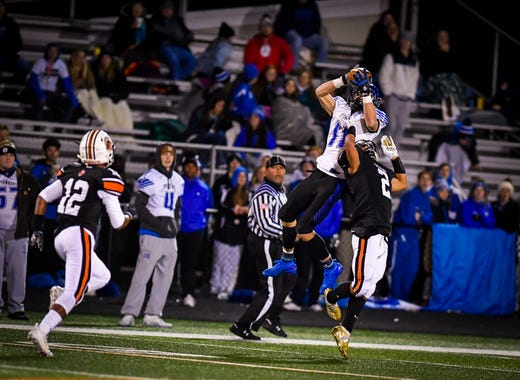 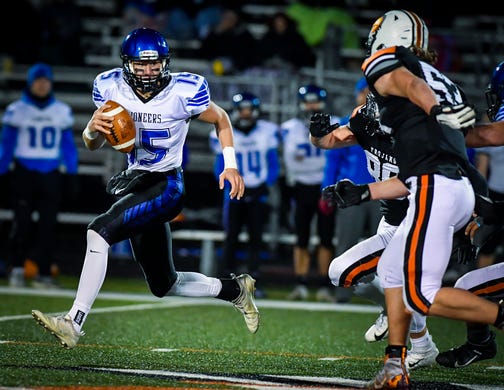 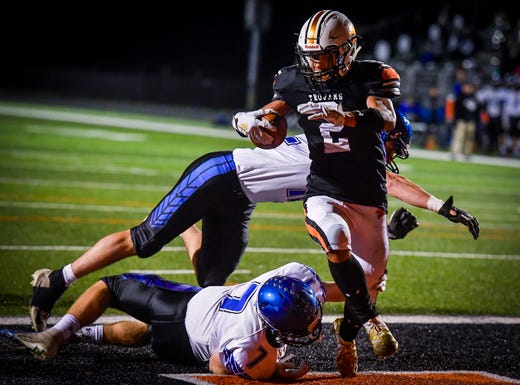 Savian Harrison scores the first touchdown for York Suburban in the third quarter against Lampeter-Strasburg during the District 3 Class 4-A quarterfinal, Friday, November 8, 2019 John A. Pavoncello photo The York Dispatch
Fullscreen 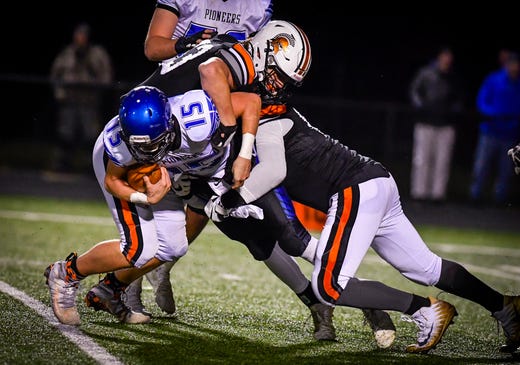 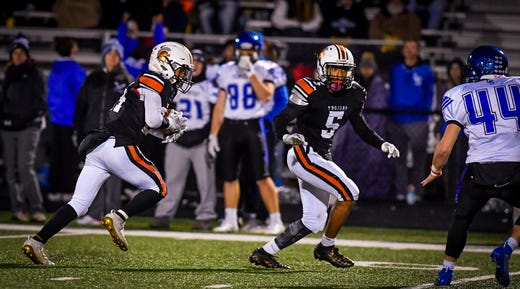 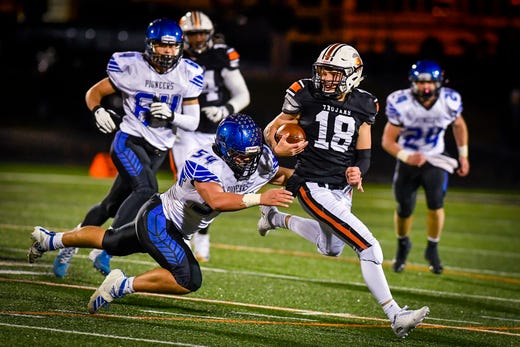 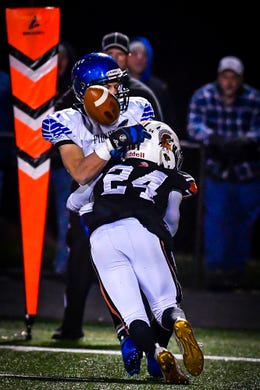 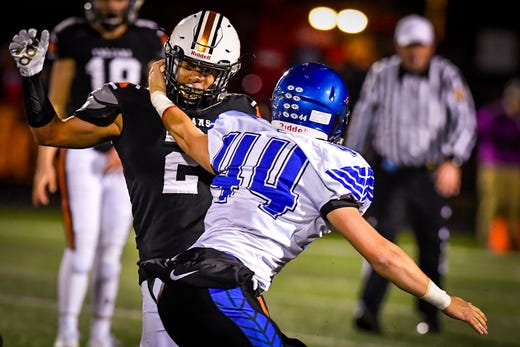 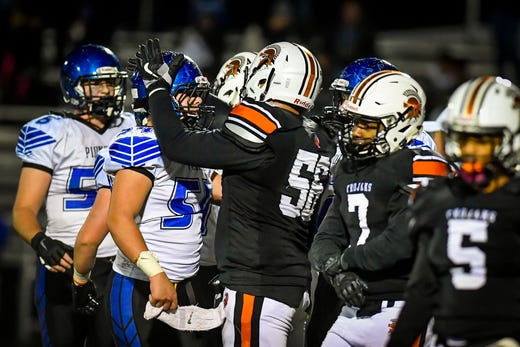 Second-half spurt: The Trojans looked like an entirely different team after they went to the locker room. The Pioneers had a pair of 84-yard touchdowns early in the game and Loucks said his team needed to change its mentality at the break trailing 21-3.

The players responded to the message from their coach. The Trojans’ defense shut down the Pioneers’ offense until the game-clinching touchdown, while the offense started to make plays.

Harrison ran in a 2-yard score to give York Suburban its first touchdown of the game early in the third quarter.

Sophomore quarterback Camden Brewer followed with a 55-yard touchdown pass to junior running back Nate Banks. The 5-foot-9 Banks spun off a L-S defender and sprinted past another on his way to the end zone.

Brewer ran in the 2-point conversion attempt to cut the Pioneers’ lead to three heading into the final quarter.

Costly turnovers: After Nolt’s touchdown put L-S up by nine, Suburban still had more than four minutes to put together 10 points in two drives if they could score quickly. A poor kick and a penalty by the Pioneers put the Trojans near field-goal range in a manner of seconds.

While under pressure from the L-S defensive line that gave him issues at times during the game, Brewer tried to avoid a sack by throwing the ball up and he was intercepted for the third time, effectively ending the game. 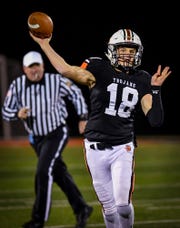 A bright future: Despite the loss, Loucks was proud of the stellar season the Trojans had. Although they will lose some impact players, such as Harrison and lineman Garth Barclay (an NCAA Division I Syracuse University commit), he is excited about the Trojans who will return next year, including Brewer, Banks and junior tight end Isaiah Pineda, who couldn’t play vs. L-S because of the PIAA transfer rule.

“We’re all obviously happy we had the season we had and it will be something they will remember for the rest of their lives,” Loucks said. “The kids that are coming back for next year, there’s no reason that if they take the time, the effort and make the commitment in the offseason to keep improving, we have the pieces (to compete). We have a lot of kids coming back on both sides of the ball that got valuable experience so, if they do what they need to, who knows?”

The third-seeded Squires finished at 8-4, while top-seeded Upper Dauphin improved to 12-0 and advanced to the state playoffs.

Delone had the ball at the Upper Dauphin 21-yard line with about 30 seconds left in the game and the opportunity to forge a tie, but couldn’t punch it in.

The Squires got a big game from quarterback Kevin Mowery, who finished 14 for 24 for 221 yards with two touchdowns and an interception. He also had 53 yards rushing.

Cedar Cliff 41, New Oxford 13: At Cedar Cliff, the Colonials saw their season end with a District 3 Class 5-A quarterfinal setback on Friday night.

The 10th-seeded Colonials finished at 7-5, while second-seeded Cedar Cliff improved to 9-2.

New Oxford QB Brayden Long, Adams County’s all-time passing leader, threw for 134 yards on 14 for 25 passing in his final game with the Colonials.

Gunner Pennington rushed for 118 yards on 16 carries in a losing cause for Gettysburg, which finished at 8-3. Berks Catholic improved to 7-4.

Central, the York-Adams League Division I champion and District 3 4-A runner-up, finished at 18-4. District 11 champion Parkland improved to 19-5 and advanced to the state semifinals.

The Panthers came into the match ranked No. 8 in the state in 4-A in the latest Pennsylvania Volleyball Coaches Association rankings. Parkland had been unranked.

Philip Jahn made seven saves in a losing cause of York Catholic.

Fairfield 2, East Juniata 0: At Mechanicsburg, the Green Knights advanced to the PIAA Class 1-A state semifinals.

Annabel Anderson had a goal and an assist for Fairfield. Nora Clarke had the other goal.

The Knights are the only York-Adams League program, in any sport, to reach a PIAA semifinal this fall.

It was Fairfield’s second 2-0 win over East Juniata this season. Those are East Juniata’s only two losses on the season. District 3 1-A runner-up Fairfield improved to 23-2. District 4 champion East Juniata finished at 22-2.