When a quarterback and wide receiver have chemistry on the field, the offense can unlock its true potential.

“We’ve been playing (together) since third grade,” Long said. “We know each other very, very well and it’s a big advantage having someone like that to always go to.”

Their connection on the field has led to Long leading the York-Adams League in passing yards (1,427) and passing touchdowns (15), while Janneh’s 603 receiving yards pace all pass catchers in the league.

To combat the double teams opponents throw at the 6-foot-3, 170-pound receiver, Janneh spent the offseason trying to improve his speed and first step off the line of scrimmage to get past defenders. He said his latest 40-yard dash was clocked at 4.6 seconds.

“Whenever a corner presses me, just use that to my advantage because I know I am faster (and) quicker than him,” Janneh said. “Working on my speed, working on my agility (and) my movements has helped a lot with getting open.” 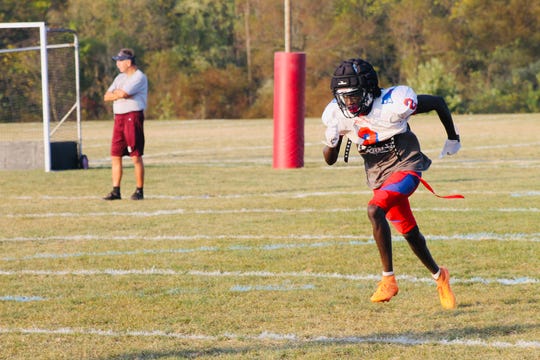 College coaches calling: In addition to focusing on their opponents each week, Long and Janneh are being pursued by college coaches looking to add them to their 2020 recruiting classes.

Long, who already received an offer from NCAA Division I Football Championship Subdivision (FCS) Central Connecticut State University, also visited NCAA Division I FCS Bryant University this summer and previously visited other schools, including, Bucknell University and Villanova University. He said multiple schools are on his list, but while the Colonials still have games on their schedule, his sights are set on making the playoffs in his final year.

Had an AMAZING day at Bryant today!! Huge thanks to @CoachSydeski and the rest of the coaching staff for having me. pic.twitter.com/3T2FaMd3ra

“Right now, it’s senior year, so my focus is all on the season right now,” the 6-3, 200-pound Long said. “I am still staying in touch with (college) coaches here and there, but the biggest thing just really is focusing on senior year and making sure we get every win that we can. The college stuff, (I'm) just waiting for it, staying patient and it will happen when it happens.”

In Janneh’s case, the recent interest from college football coaches has taken him by surprise. As a standout for the New Oxford basketball team and 2018 York-Adams League Division I first-team all-star, Janneh always envisioned a college basketball future for himself, but is open to the path that puts him in the best situation to succeed.

“It’s kind of crazy right now,” Janneh said. “I always wanted to play college sports in general, mostly basketball actually, but just getting all these looks from football teams who are interested is kind of crazy. Keeping everything open, whether it’s basketball, football or track, is just a lot on my plate. I am still just trying to focus on this season right now and still try to stay in contact with all these coaches. It’s a ride, but I am enjoying it.”

Special Thanks to @Landry6@TUCoachCarey@Temple_FB for the game day visit. Had great time watching the Owls give a beat down on Georgia Tech. Now that’s #TempleTUFF 🦉 pic.twitter.com/Yc98xHfwJB

Leading by example: One of the key pieces of motivation that New Oxford coach Jason Warner uses for the Colonials is 2008 New Oxford graduate Erik Harris’ journey to the NFL and recent success with the Oakland Raiders. Harris talked to the team before last season and Warner said Long and Janneh are examples for their teammates of what can happen if you’re willing to put in the effort required to play at the next level, like Harris.

“It helps out a ton,” Warner said. “The leadership piece is probably the biggest piece. To see these guys going through the same process is exciting I think for the young kids. It always helps some of these guys understand, you put the hard work in and it will pay off, as long as you play hard.” 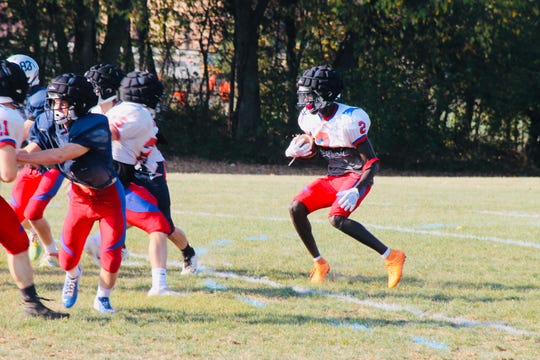 Finishing strong: While their football futures are uncertain and coaches are chasing after them, the focus for the senior duo is on finishing their final high school season with a winning record and a district playoff berth. With four games left and a 3-3 overall record, Long let his expectations for the rest of the season be known to his teammates after a tough loss on Sept. 20.

“After we lost that game against Central (York), I (went to) the board and wrote ‘7-3,’” Long said. “We’re just preaching every day, 1-0 and just winning in the game in front of us and not looking ahead and not looking back, for sure.”

New Oxford senior quarterback Brayden Long rolls out of the pocket during a drill at practice. Long has an offer to play at NCAA Division I Football Championship Subdivision Central Connecticut State University. (Photo: ROB ROSE/@robrosesports)

As they prepare to close out their high school careers together, Long is just happy to be out there on the field with his friend and doesn’t want to waste any of the few chances they have to connect for touchdowns and win games.

“We’ve been looking up to this since we’ve been in third grade,” Long said. “Playing together our senior year, (under the) Friday night lights, it’s really awesome. You can’t explain the feeling you get when you’re on the field with a guy like that.”