Check out game capsules for each contest involving a York-Adams League team during Week Zero. 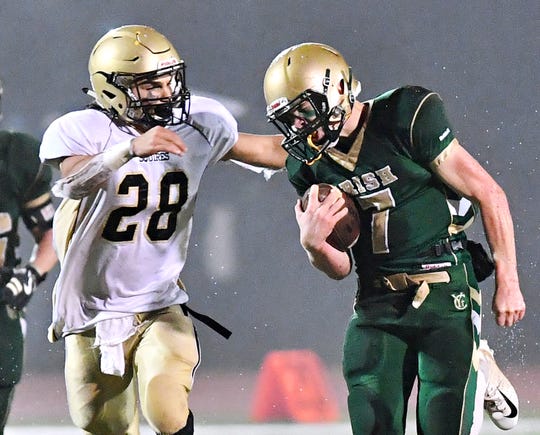 Mitchell Galentine, right, is seen here in action against Delone Catholic last season. Galentine is expected to be the Fighting Irish quarterback this season. The Irish are coming off a 12-1 season. (Photo: The York Dispatch)

The following are game capsules for York-Adams League teams in Week Zero of the high school football season. All games are at 7 p.m. Friday, other than York High vs. Pittsburgh Central Catholic at Woodland Hills, which begins at 8 p.m. Friday.

Bermudian Springs vs. New Oxford at South Western: The Colonials and Eagles open the year against each other for the eighth straight season. Bermudian Springs has won six of the season-opening contests, including a 28-22 victory in 2018. The Colonials are led by senior quarterback Brayden Long, who has received an NCAA Division I offer from Central Connecticut State University. Meanwhile, the Eagles’ signal caller, Chase Dull, graduated and the team will need to replace his 1,240 passing yards.

Dallastown at Hempfield: After losing to the Black Knights twice during the 2017 season, the Wildcats dropped another close contest in the match-up to begin the 2018 campaign. Dallastown is replacing a number of starters, including running back Nyzair Smith, who rushed for 1,985 yards in 2018. Hempfield returns senior quarterback Colin Peters, but lost its top rusher and receiver from last season.

Central York at West York: The crosstown rivalry will end this year, with Central York looking to improve its schedule strength come playoff time. In the past three seasons, the Panthers have secured double-digit wins over the Bulldogs, including a 38-14 victory last year. Central lost quarterback Cade Pribula, who led the York-Adams League in passing yards with 2,872, to the University of Delaware, but his younger brother, rising sophomore Beau Pribula, takes over. Beau Pribula already has an offer from Temple University before his first start. Division II first-team all-star quarterback senior Corey Wise leads the Bulldogs’ offense.

South Western at Gettysburg: After winning this match-up for the previous three seasons, the Mustangs were treated to a 42-6 beatdown by Gettysburg last year. South Western’s most effective quarterback in 2018, Derek Huff, graduated after the team’s 1-9 campaign. After an 8-3 season, Gettysburg will need to replace Division II Offensive Player of the Year Ammon Robinson. However, the Warriors can count on the return of Division II Defensive Player of the Year Austin Heiser.

Northeastern's Manny Capo, seen here in a file photo, is expected to be one of the better backs in the York-Adams League this season. (Photo: The York Dispatch)

Northeastern at Solanco: The Bobcats won this match-up in 2016 and 2017, but suffered a 38-13 defeat last season. Northeastern returns a trio of Division I All-Stars on offense in senior quarterback Zech Sanderson, rising junior running back Manny Capo and senior wideout Jordan Lagana. For Solanco, the quarterback a and key part of the rushing attack, Joel McGuire, graduated following the team’s 7-5 season.

Red Lion at McCaskey: These two teams met for the first time in six seasons last year and the Lions blew out the Red Tornado, 35-12. Red Lion graduated 14 starters from the 2018 squad, including quarterback Zach Mentzer. For McCaskey, senior quarterback Isaiah Thomas returns after a 1-9 season.

Spring Grove at Lampeter-Strasburg: In the first year these teams met, the Rockets were handed a 35-13 loss. After a 1-9 season, Spring Grove will need to replace quarterback Nick Shaqfeh. The Pioneers return rising junior quarterback Sean McTaggart, who threw for 1,714 yards in the team’s 6-6 campaign in 2018.

York High vs. Pittsburgh Central Catholic at Woodland Hills: The Bearcats followed up a 9-2 season in 2017 with an 11-2 record in 2018. York High lost running back Dayjure Stewart and his 3,045 rushing yards to Illinois State University. The Bearcats could really use Stewart in their first game against the Vikings, who feature a number of NCAA Division I recruits, including senior defensive end A.J. Beatty, who is committed to play at the University of North Carolina. Senior Tobee Stokes will become York High’s quarterback after playing running back and receiver.

Shippensburg at Dover: The Eagles and Greyhounds meet for the sixth straight season. Dover won in 2014 and 2015, but Shippensburg has won the last three contests, including a 35-28 victory last year. The Eagles return their starting quarterback, senior Justin Johnson, who threw for 1,364 yards in 2018. The Greyhounds also return their starting quarterback in rising junior Zack Manning.

Columbia at Eastern York: After two years without facing each other, the Golden Knights and Crimson Tide met last season. Eastern York cruised past Columbia, 41-13, for one of its three victories in a 3-7 campaign. Columbia also went 3-7 last season and return senior quarterback Matt McCleary. The Golden Knights lost receivers Demonte Martin and Dylan Zurin to college football, but return senior quarterback Trevor Seitz, who was a Division II second-team all-star.

Hanover at Susquehannock: The Warriors beat the Nighthawks in the first meeting between the teams in 15 years in 2018, 28-7. Susquehannock finished last season 4-6 and needs to replace quarterback Kenny Rhyne, who graduated. Hanover will also have a new signal caller this season after quarterback Jeff Jacoby graduated following a 3-7 campaign.

York Suburban's Savion Harrison, seen here in a file photo, is the leading returning rusher in the York-Adams League. (Photo: The York Dispatch)

Trinity at Delone Catholic: In what had been a close match-up in recent years, the Squires blasted the Shamrocks, 47-7, last season. Delone Catholic had a successful campaign in 2018 with a 10-2 record, but lost Division III All-Stars in quarterback Evan Brady and running back Logan Brown to graduation. After a 1-9 season, senior quarterback Danny Scott returns for Trinity.

Littlestown at Boiling Springs: The Thunderbolts beat the Bubblers, 35-29, to begin the 2018 campaign. After a 7-4 season, Littlestown will have a difficult time replacing the Division III Co-Offensive Player of the Year, QB Jakob Lane. Boiling Springs went 3-7 a season ago and return rising sophomore quarterback, Colin Lunde.

York Tech at James Buchanan: After 11 years, these two teams matched up to begin the season and the Rockets won, 32-8. The Spartans haven’t won a game in two years, but have hope for a turnaround under new coach Matt Glennon in his second stint at York Tech. James Buchanan went 4-6 in 2018 and returns senior quarterback Sebastian Wise.