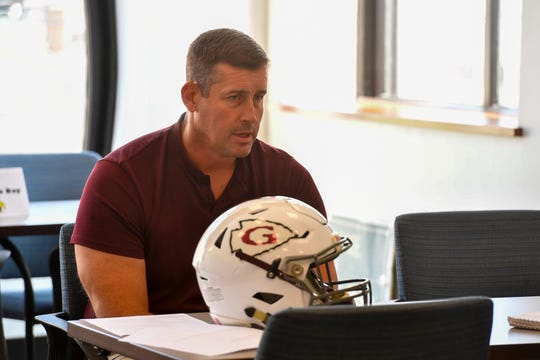 Despite capturing the program’s first-ever York-Adams League Division II title in 2018, the Gettysburg Warriors are anything but sure bets to repeat this season.

Even with a ton of returning talent in many of the key offensive skill positions — quarterback, running back and receiver — the Gettysburg boys know that repeating as undefeated division champs will require a lot to go right.

“They’re working hard,” Warriors coach Matt Heiser said. “They’re a great group of boys and they have great chemistry together. They’re focused and they put in a lot of time this summer. I know there’s a lot of excitement and they’re ready to go.”

Success in football can often be directly attributed to the quarterback position. With Zach Ketterman, an all-star as a junior, back for his senior season, the Warriors know they should be set there.

Defensively, there’s even more to be excited about. Coach Heiser’s son, Austin, returns a season after earning the D-II Defensive Player of the Year award. So are fellow all-stars in Charles Warren (WR/RB/LB), Devin McIntosh (OL/DL), Gunner Pennington (RB/LB) and Hunter Williams (OL/DL).

The Warriors will have one very big hole to fill. Ammon Robinson, the 2018 D-II Offensive Player of the Year, graduated in the spring after setting a school record with 1,534 yards rushing.

Even with a great deal of talent back in the fold, coach Heiser isn’t quite counting his chickens yet. The other D-II teams — particularly York Suburban and Susquehannock — have quite a bit of experience and talent returning, as well.

“I expect it’s going to be really tough in Division II,” Heiser said. “I mean everyone has a lot of talent on their teams and they’re well coached, so it should make for another exciting season.”

Following is a capsule preview of the 2019 Gettysburg season.