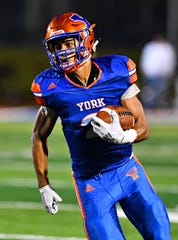 In York High’s football game against South Western this season, the Bearcats’ star running back, Dayjure Stewart, was knocked out of the game with a minor injury.

Junior Tobee Stokes, who served as the team’s backup quarterback and starting slot back, stepped in for Stewart, rushing for 222 yards and four touchdowns in the win.

“That game really gave him a lot of confidence,” said York High head coach Russ Stoner in November. “Coming into this year, I think Tobee was questioning if he was as good as the Khalid Dorseys (a 2017 York High standout) and the Dayjure Stewarts, and the answer to that is yes.”

Stokes proved he belonged with the best York County has to offer Tuesday night when he received his first NCAA Division I offer from Football Championship Subdivision Illinois State.

“I was shocked,” Stokes said. “I had so many emotions. The offer for me, it just made me realize that the opportunity is there for me to actually be able to help out my family, because one day I hope to give back to my family for all they’ve done for me.”

The 5-foot, 10-inch, 165-pound athlete, who played defensive back, quarterback, wide receiver and running back for the Bearcats, follows Stewart, who officially signed his National Letter of Intent to become a Redbird on Wednesday. Stewart earned a full-ride scholarship, and Stoner said Stokes’ offer is for a full ride as well.

“He honestly at times, he looks up to those guys (Dorsey and Stewart), that he doesn’t realize how talented he is,” Stoner said. “He’s the next guy.”

“Creating a bond with those two was pretty big for me, to look up to two great running backs,” Stokes said. “I try to reflect my game off theirs because they’re my idols.”

About ISU: Illinois State plays in the Missouri Valley Conference — one of the top FCS conferences in the nation, with perennial powerhouse North Dakota State as the league’s top team. The Redbirds have consistently been a ranked program, with playoff appearances in 2012, 2014, 2015 and 2016. In 2014, Illinois State lost to NDSU 29-27 in the national title game.

Stoner is friends with ISU offensive coordinator Kurt Beathard, who is the son of Hall of Fame NFL general manager Bobby Beathard.

“That makes you feel good when one of your buddies is recruiting one of your kids, because you know he’ll take care of him,” Stoner said. 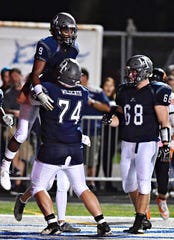 Next season: Against Cocalico in the District 3 Class 5-A semifinals, Stokes played about a dozen snaps at quarterback while also playing slot back. He completed two passes for 100 yards and a TD. He added 14 yards on three carries and 25 yards on three receptions.

“The ball is going to be in his hands,” Stoner said. “He’ll be a quarterback (next season), but he can play other positions too. He’s too good of an athlete not to have the ball in his hands.”

Christas picks East Stroudsburg: The best two-way lineman in the York-Adams League, according to some area coaches, signed Wednesday to play offensive line for East Stroudsburg.

Raymond Christas, who is also a top wrestler for a Dallastown team that just qualified for the state tournament, was the leader of the Wildcats' offensive line at center. He blocked for Nyzair Smith, one of the top backs in the league. On defense, Christas tallied 49 tackles and 6.5 sacks.

Christas a 'monster' for Dallastown football

More Y-A players choose Millersville: If Y-A football fans want to root for former players when they move on to college, Millersville will be the easiest team to follow. At least nine area players officially committed or transferred to Millersville on Wednesday.

First Marauder of the day is in! Ben Bartkowski, Defensive Tackle, Central York High School. This man is a force #PureAggression#MarauderDNA#IsItInYou 〽️ pic.twitter.com/KgviZ8tFOY

Former York High quarterback Micah Anciso has transferred from Lock Haven to Millersville for his sophomore season. As a freshman this season, Anciso didn’t play for NCAA Division II Lock Haven. Anciso led the Bearcats to a 9-2 record and a District 3 5-A appearance in 2017.

Also transferring to become a Marauder is kicker/punter Connor Zahm, a Bermudian Springs grad. Zahm is transferring from Thaddeus Stevens College of Technology.

Other commits: Wednesday was filled with signed letters of intent from student-athletes across the Y-A League. Here are a few other area athletes who will be competing at the D-II level in college:

Former York Catholic offensive lineman Matt Knauer transferred to play at Shippensburg. The 6-5, 305-pound lineman was a freshman at Seton Hill this past season.