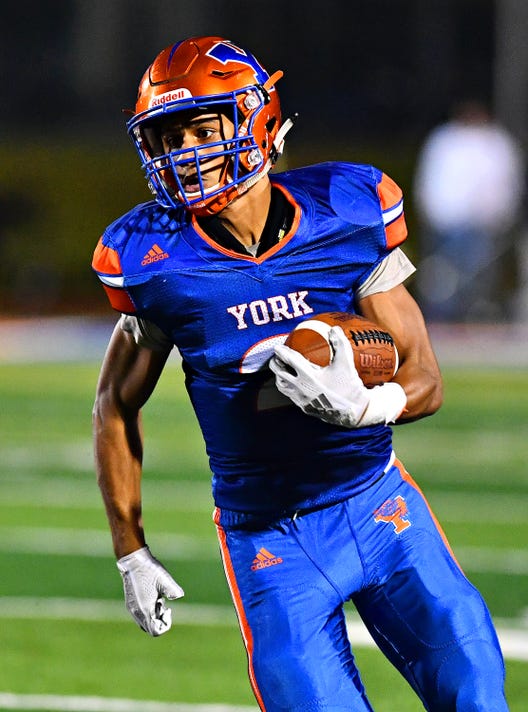 York High's Tobee Stokes, shown here in a game earlier this season, returned a kickoff for a touchdown last week against Shippensburg, but it was brought back on a penalty. DISPATCH FILE PHOTO(Photo: The York Dispatch)Buy Photo

Over the last several weeks, the main takeaway after each York High football game has been about Dayjure Stewart.

The senior running back is breaking records left and right, and he’s leading the Bearcats (11-1) to their best season in at least 30 years.

As all coaches say, though, football is the ultimate team game.

Three York High players — Marcellus John, Tobee Stokes and Tino Conquest — are playing crucial roles for the Bearcats this season, and their influence was felt in the team’s 22-6 District 3 Class 5-A quarterfinal victory over the Shippensburg Greyhounds on Friday night.

Stripping the ball was Rob Rideout, the 2017 York-Adams League Division I Defensive Player of the Year. Recovering the football, and almost returning it for a touchdown, was John, a sophomore outside linebacker/defensive end.

“I was rooting for him to take it back,” York High head coach Russ Stoner said. “I thought he was going to.”

On the next drive, John sacked Shippensburg’s quarterback for an 8-yard loss, hindering an unsuccessful comeback attempt by the Greyhounds. 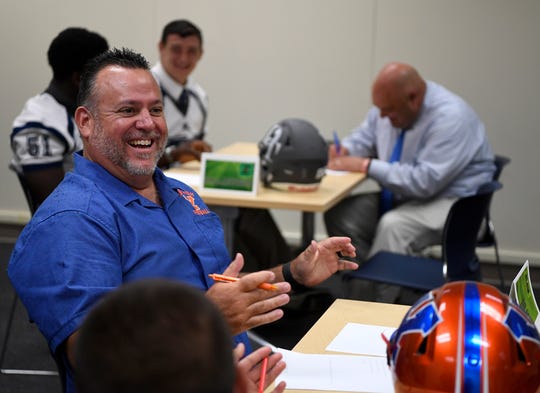 York High head coach Russ Stoner, seen here in a file photo, has lots of reasons to smile these days. His Bearcats have advanced to the District 3 Class 5-A semifinals. DISPATCH FILE PHOTO (Photo: The York Dispatch)

“He’ll get after it,” Stoner said. “Once the game slows down for him a little bit, which doesn’t always happen for the young guys, he’s going to be really good.”

Stoner said John, who was recently named a Division I honorable mention all-star at outside linebacker, has moved around a lot on the Bearcats’ defense, from being listed as a middle linebacker to start the season, to defensive back, to now being a hybrid outside linebacker/defensive end. In the future, Stoner expects John to earn touches as a running back.

“He’s still learning the Bearcat way,” Stoner said. “The trust part, how to practice every day, those types of things. His future is extremely bright. We put him in at defensive end. I’m not even sure that’s his natural position yet. But him being able to do what he is able to do, it has given us a lot of options defensively.”

Tobee Stokes: The Bearcats trailed 6-0 going into halftime, but if you ask Stoner, they probably should’ve been up by a touchdown.

Two York High scores were brought back on penalties, including the biggest play any player made all game — an 80-yard kickoff return by junior Tobee Stokes. With other skill position players such as Rideout and Stewart, Stoner said finding ways to get the ball in Stokes’ hands is key.

“His skillset is really ridiculous,” Stoner said. “He can catch the ball and run well, and he’s in the secondary as well. … We have to get a kid like him on the field somewhere. He’s in the slot, and he’s playing running back.”

Stoner said Stokes is the “quarterback in waiting,” so instead of wasting his athleticism as Seth Bernstein’s backup, Stoner has used Stokes in the slot and as a running back. The Y-A coaches named Stokes a second-team running back and an honorable mention cornerback.

“There are definitely times when I look around and I wish I could get some kids more touches,” Stoner said. “I guess around here, the skill guys have to wait their turns, and we go from there. The other part that does, is it builds that competition piece. It makes all of the kids compete.”

Stokes had his opportunity to shine earlier this season vs. South Western. Stewart left the game with an injury in the first quarter, and Stokes rushed for 222 yards and four scores in the win.

“That game really gave him a lot of confidence,” Stoner said. “Coming into this year, I think Tobee was questioning if he was as good as the Khalid Dorseys (a 2017 York High standout) and the Dayjure Stewarts, and the answer to that is yes.”

Tino Conquest: The biggest stop on defense vs. Shippensburg wasn’t the forced fumble by Rideout, but rather a heads-up play by cornerback Tino Conquest.

The Greyhounds ran a halfback pass that would’ve put them up a touchdown in the second half. Conquest, generously listed at 5-feet, 7-inches, 140-pounds, didn’t bite on the trick play, and smacked the ball out of the air to prevent the touchdown.

“I have all of the confidence in him,” Stoner said. “The one thing he does is, he really competes, and he doesn’t want to lose. When he gets dialed in like that, I feel really good about him.”

Stoner said smaller players such as Conquest, who was named an honorable mention all-star at wideout, remind him of his older brother, who Stoner said was an “undersized quarterback” at West York.

“He really never got a chance to play until his senior year,” Stoner said. “He then led the team to a 9-1 record. I’ll never forget him trying to get on the field as an undersized player. As a coach, I don’t care how big you are, I care how big your heart is. If you’re going to play hard, listen and work hard, we’re going to try to figure out how to get you on the field.”