Here's a breakdown of all 12 football games involving a York-Adams League teams this weekend. 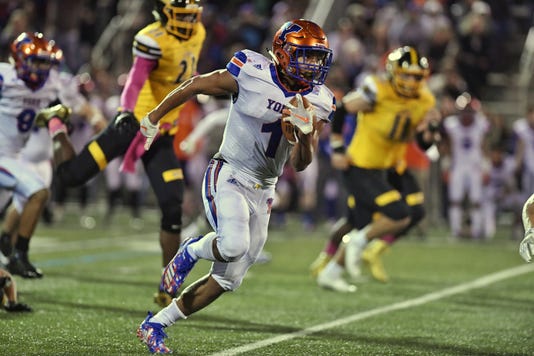 The following are high school football game capsules for York-Adams League teams this weekend. All games are 7 p.m. Friday, Oct. 12, unless otherwise noted.

►Central York (6-1, 3-1) at Northeastern (4-3, 3-1): The Bobcats have been mostly left out of the Division I title conversation. With only three weeks left in the season, though, Northeastern is in a five-way tie for first. After upsetting Red Lion two weeks ago, the Bobcats took care of business vs. South Western last week. Central, another one of the five teams tied for first, has defeated the bottom three teams in the division since its loss to Red Lion to start D-I play. Quarterback Cade Pribula continued his dominance, passing for 279 yards — surpassing the 2,000-yard mark for the season — in last week's victory. Central defeated Northeastern 36-7 last year.

►Red Lion (5-2, 3-1) at New Oxford (2-5, 1-3): The Lions are coming off one of the biggest upsets of the season. Zach Mentzer, Randy Fizer and Elijah Workinger all made big-time plays to lead the Lions to a comeback win in the fourth quarter to beat previously unbeaten York High. Both of Red Lion’s losses (to Northeastern and Chambersburg) were unexpected, though, and both came on the road. New Oxford, meanwhile, lost 45-14 to Dallastown last week after beating Spring Grove the week before. The Lions won this match-up 46-21 last year.

►South Western (0-7, 0-4) at York High (6-1, 3-1): The Bearcats will likely come out angry this week. York High blew a 13-point lead with less than four minutes left in the fourth quarter last week to lose to Red Lion. Dayjure Stewart, Rob Rideout and the rest of the Bearcats will look to get back in the win column against the winless Mustangs. South Western lost 38-16 to Northeastern last week and has lost every game this season by three or more scores. The Mustangs lost to the Bearcats last season, 34-20.

A breakdown of Red Lion's win over York High

►Dallastown (4-3, 3-1) at Spring Grove (1-6, 0-4): The Wildcats followed up their 33-point loss to York High with a 45-14 win against New Oxford. Dallastown is one of the five teams tied for first in the division, and this match-up comes before Nyzair Smith and the Wildcats play their final two games against Central and Red Lion. Meanwhile, the Rockets are still winless in division play, losing to Central by 44 points last week. Dallastown defeated Spring Grove 52-13 last year.

►Mifflin County (3-4) at Dover (5-2, 4-0): The Justin Johnson-led Eagles soared to a 34-12 win over York Suburban last week to remain undefeated in the division and tied with Gettysburg for first. Johnson threw for 179 yards and totaled four touchdowns in the win. This week, the Eagles are the odd team out and will play a nondivision game. Their opponent, Mifflin County, is coming off a double-overtime victory over Waynesboro. The Eagles and the Huskies share one common opponent: Shippensburg. Dover lost 35-28 to Shippensburg to open its season, while the Huskies won the match-up 26-21. Mifflin County has also played Y-A D-I squad Northeastern, defeating the Bobcats 21-19. The two teams didn’t face off last season.

►York Suburban (4-3, 2-1) at Gettysburg (5-2, 4-0): The Trojans are hoping to pull a Red Lion this week. Red Lion lost to Northeastern two weeks ago — a loss that could’ve ended the Lions’ season if they hadn’t then knocked off the top team in the division (York High) the next week. Suburban could similarly nullify its loss to Dover last week if the Trojans upset the Warriors, who are coming off a 45-7 win over Kennard-Dale. Ammon Robinson scored three TDs to bring his season totaled to 20. The Warriors defeated the Trojans 55-20 last year. 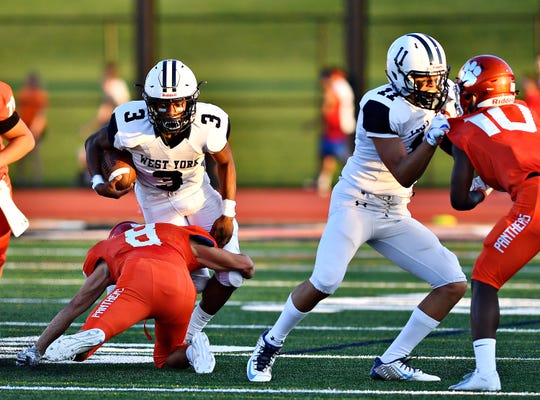 Ay'Jaun Marshall, shown here running the ball in a game earlier this season, and the rest of the West York Bulldogs will hope to win their third straight game Friday against Kennard-Dale. DISPATCH FILE PHOTO. (Photo: The York Dispatch)

►Kennard-Dale (3-4, 0-3) at West York (2-5, 2-1): Ay’Jaun Marshall carried the Bulldogs to a close victory over Eastern last week with 243 yards rushing and four TDs. After an 0-5 start, the Bulldogs have won two straight and will take on a K-D team that has yet to win a D-II game. The Bulldogs have a chance to win or share the D-II title, but they need to win the rest of their games this season and hope for some help. Meanwhile, the Rams are coming off a 45-7 loss to Gettysburg last week.

►Eastern York (2-5, 0-4) at Susquehannock (1-6, 0-3): Neither of these teams has won a game since August. After starting 2-0, the Golden Knights have dropped five straight, and Susquehannock hasn’t won since its season-opening win. Eastern suffered a close loss to West York last week, 34-33, while the Warriors lost 41-14 to Northern York. Susquehannock won this match-up 42-0 last year.

►Hanover (2-5, 2-2) at York Catholic (7-0, 4-0): The Fighting Irish have been turning back the clock this season, with the team’s defense leading the way. Only Delone Catholic has allowed fewer points this season. York Catholic’s defense has given up just eight points per game. Starting quarterback Mitchell Galentine and running back Cole Witman returned to the team last week in York Catholic’s 41-10 win over Fairfield. The undefeated Irish get a tune-up before their Division III-deciding match-up against Delone next week. Hanover, meanwhile, is hoping to play spoiler and hand the Irish their first loss in a possible trap game. The Nighthawks lost 43-3 last week to Littlestown. York Catholic won this match-up 54-37 a year ago.

►Fairfield (1-5, 0-4) at Delone Catholic (7-0, 4-0): Similar to the Irish, the Squires will play a tune-up game before its big battle vs. York Catholic for the division title. Delone played the closest game of its season last week, defeating Bermudian Springs 17-7. Fairfield is coming off a loss to York Catholic and is winless in division play. Fairfield lost 42-0 to Delone last season.

►Biglerville (2-5, 2-2) at Littlestown (5-2, 2-2): After dropping their first two division games, the Thunderbolts have rolled off two straight wins by an average of 52.5 points over York Tech and Hanover. QB Jakob Lane accounted for three TDs in the Hanover win, while Jason Penton and Corbin Brown both tallied two scores apiece. The Canners, meanwhile, are coming off a 28-0 win over Tech last week. Littlestown shut out Biglerville 26-0 last season.