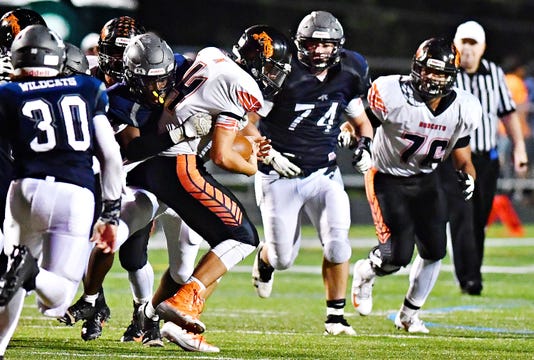 When watching the Dallastown High School football team, one player normally stands out.

Nyzair Smith, the team’s running back, is an NCAA Division I recruit who uses his speed, strength and agility to shed defenders and run for incredible touchdowns.

Take the Wildcats’ win over Northeastern last Friday as an example. Smith ran the ball 34 times for 321 yards and four touchdowns in Dallastown’s 41-25 win over the Bobcats.

However, according to first-year Dallastown head coach Ron Miller, there’s another Wildcat who Miller said is just as valuable as Smith or any top player in the York-Adams League — two-way lineman Raymond Christas.

“He’s the (Smith) of the line, to be quite honest,” Miller said. “If you compared how important they are, that’s how important he is to us up front on both sides of the ball.”

Christas is Dallastown’s center and a member of the Wildcats’ defensive line. The senior was a first-team D-I all-star at both positions last season.

“He’s a monster,” Miller said. “He just doesn’t stop going. He just goes and goes on both sides of the ball. His football IQ is high. He’s tough. He’s a leader. Anything I can throw in front of his name that’s positive I can do for Raymond Christas.”

“I grew up in this atmosphere,” Christas said. “It’s been part of me my entire life, and I love it.”

QB of the O-Line: The center position is dubbed the “quarterback of the offensive line,” because of the intelligence the center also needs to possess to succeed. Without a good center, it’s rare that an offensive line — and thus the offense — can gain yards.

“He has that football intelligence,” Miller said. “He knows everybody’s assignments. When guys are losing their minds, he can get them straightened out.”

Christas said his leadership and smarts as a center have taken an uptick this year, since the other four linemen are first-year starters.

“The center is the quarterback of the line,” Christas said. “I have to know everything. When you have four other guys who have never played a varsity down before this year, knowing everything really helped.”

Blocking for Smith: Smith acknowledged, as all good runners do, that he wouldn’t be nearly as successful if it weren’t for offensive linemen such as Christas.

“He’s a great player,” Smith said. "He plays both sides of the ball, and he gives maximum effort.”

Christas said blocking for a back as talented as Smith makes his job easier.

“To have a guy back there who I know can make plays, even when (the line) doesn’t make our best play, is really nice,” Christas said. “If we make a good play, he’ll hit the hole. But if we don’t, we know he’ll be there to back us up and make a play for us. It’s nice to have that guy behind me.”

Two-way player: While Christas is one of the best centers in the Y-A League, he may be an even better defensive lineman. The 6-foot-2-inch, 260-pound defensive tackle said he prefers playing defensive line for the same reason most defensive players enjoy that side of the ball: He likes to hit people.

“Defense is my favorite side of the ball,” said Christas, who is also a standout member of the wrestling team at Dallastown, posting a 37-4 record as a junior heavyweight. “For me, it’s just (going) 100 percent and (being) a bull in a china shop. I want to create chaos and make plays,” Christas said. “…On offense, you kind of have to be more careful with it. With defense, it’s just a tough, brutal go at it. I love that — the physicality.”

Nonstop work ethic: Christas had two of Dallastown’s five sacks in the Wildcats’ win over Northeastern last week. Despite Dallastown running a fast-paced, no-huddle offense and Christas playing defense and long snapping on special teams, Miler said Christas doesn’t tire in the fourth quarter because of his work ethic in the offseason.

“He hasn’t miss one workout,” Miller said. “He’s the type of kid to come to a morning workout on Friday, then lift Friday afternoon and then he’d do a wrestling tournament over the weekend. That’s how Raymond is. He has a commitment to excellence and to be the best he can be.”

Christas hasn’t decided where he’s going to college yet, but he knows he wants to play football. Miller only has a handful of games left with his star lineman and he knows having another player like Christas will be rare.