Here's a breakdown of all 20 games involving a York-Adams League team in Week Two. 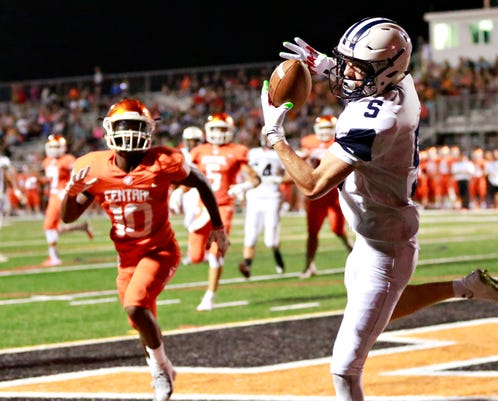 The following are game capsules for York-Adams League teams in Week Two of the high school football season. All games are at 7 p.m. Friday.

►Central York (2-0) at Hempfield (1-1): The Panthers are enjoying their best start to a season in recent memory. Central dominated West York in Week Zero and followed that by defeating Cumberland Valley — a team the Panthers had lost to in eight straight seasons — in convincing fashion, 31-14. Meanwhile, the Lancaster-Lebanon squad is coming off a 28-7 loss to powerhouse Manheim Central after defeating defending D-I co-champion Dallastown the week before. This match-up has been a tight one each of the last two seasons. The Black Knights won 24-21 last year, but Central won 48-42 in 2016.

►Penn Manor (0-2) at Dallastown (0-2): Ron Miller’s Dallastown tenure hasn’t started the way he envisioned. The Wildcats lost 24-19 to Hempfield in Week Zero and were crushed 38-0 by Manheim Township on Monday. Penn Manor lost 31-13 to Conestoga Valley to start the season and was shut out 42-0 by Lampeter-Strasburg last week. Dallastown, which will play this game on three days’ rest after its game vs. Manheim Township was postponed to Monday, has won this meeting each of the last three seasons by a combined score of 107-33. 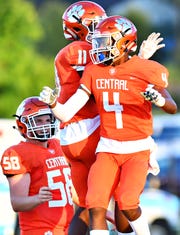 ►New Oxford (1-1) at Solanco (2-0): The Colonials dramatically ended their 22-game losing streak last week, defeating Conestoga Valley 25-24 for their first win since 2015. New Oxford was trailing 24-12 at halftime, only to come back and take the lead on Andrew Sanford’s 3-yard touchdown run with 30 seconds remaining for the win. Solanco has beaten up on York-Adams League teams so far this season, defeating Northeastern 38-13 in Week Zero and Kennard-Dale 46-6 last week.

►Northeastern (0-2) at Mifflin County (0-2): This game will match two teams still searching for their first wins of the season. In addition to the Bobcats’ loss to Solanco in Week Zero, Northeastern couldn’t come out on top vs. Carlisle last week, falling 10-6. Similarly, the Huskies lost by three scores in Week Zero to State College but played a closer game last week in a 39-28 loss to Hollidaysburg. These two squads didn’t play each other last season.

►Red Lion (2-0) at Chambersburg (2-0): Both teams have been impressive through two weeks, though neither has played a difficult foe. That will change in Week Two, when the Lions travel to take on the Mid-Penn squad that has one of the largest enrollments in District 3. Red Lion defeated McCaskey in Week Zero and manhandled Waynesboro 48-14 last week, while Chambersburg has beaten Greencastle and South Western so far this season.

►South Western (0-2) at Carlisle (2-0): Despite sporting a solid rushing attack that is averaging 6.0 yards per carry (fourth best of all Y-A teams), the Mustangs are winless heading into September. South Western has allowed a total of 93 points in its losses to Gettysburg and Chambersburg. The Thundering Herd defeated Mechanicsburg 46-7 in Week Zero before taking down South Western’s Division I rival Northeastern, 10-6, last week. Carlisle has won the last two match-ups, 28-19 and 21-9. South Western last defeated the Herd in 2015.

►Spring Grove (1-1) at Conestoga Valley (1-1): The Rockets are coming off a convincing, 35-13 win vs. Muhlenberg last week and will take on the team that gave New Oxford its first win since 2015. Brian Foltz leads the Rockets with 156 yards on 26 carries this season. Spring Grove lost to Lampeter-Strasburg in Week Zero, while the Buckskins defeated Penn Manor. The two teams didn’t face off last season. 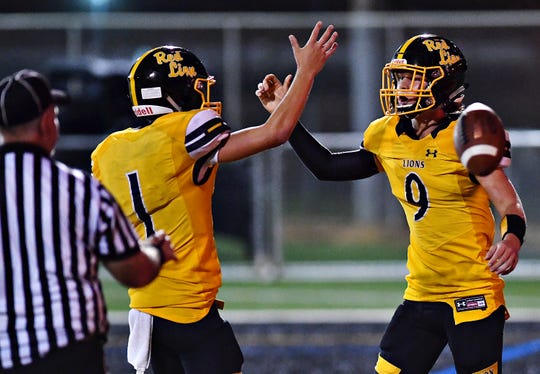 ►Biglerville (0-2) at Kennard-Dale (1-1): The Rams fell from Cloud Nine last week. K-D crushed Pequea Valley 33-0 to start the season but got a taste of its own medicine last week vs. Solanco. The Canners travel to Fawn Grove Friday hoping for their first win of the season. Biglerville has lost to Big Spring and Steel-High by 26 points both games. The two Y-A teams didn’t play each other last season.

►Red Land (1-1) at Dover (0-2): The Eagles are winless heading into Week Two, but that doesn’t mean they’ve played poorly. Dover lost a one-score game to Shippensburg to start the season and lost by 21 points to Elizabethtown on Monday after the game was postponed Friday. Both opponents are 2-0. The Eagles, playing on three days’ rest, hope to win their first game at home against the Patriots, who lost to Waynesboro in Week Zero and defeated East Pennsboro 7-0 last week. Dover snapped Red Land’s three-game winning streak in the series last year, defeating the Patriots 36-13.

►Littlestown (2-0) at Eastern York (2-0): The two undefeated Y-A teams in this match-up couldn’t be in more different situations. The Thunderbolts are the defending D-III co-champions, while the Golden Knights have already matched their win total from last season. Littlestown has defeated Boiling Springs and Susquehannock to start its campaign, while Eastern has beaten Columbia and Hanover. Both teams have benefited from excellent quarterback play. Jakob Lane (478 yards and three touchdowns) leads the Thunderbolts, while Trevor Seitz (414 yards and eight TDs) leads the Knights. Littlestown defeated Eastern 26-14 last year.

►Gettysburg (1-1) at Waynesboro (1-1): The Warriors are off to an impressive start this season, despite having a loss. Gettysburg won in dominating fashion vs. South Western in Week Zero and lost a two-score game to District 3 powerhouse Bishop McDevitt last week. Waynesboro defeated Red Land in Week Zero but was mercy-ruled by the Lions last week. Gettysburg defeated Waynesboro 14-13 last season.

►York Catholic (2-0) at Susquehannock (1-1): The Fighting Irish have only scored 40 points through two games, but the stingy York Catholic defense has allowed a measly 17 points. York Catholic, the defending D-III co-champion, defeated York Suburban 21-14 to begin its season and beat Trinity 19-3 last week. Susquehannock, the defending D-II champ, beat Hanover in Week Zero but lost to Littlestown last week. The Irish have triumphed in this match-up the last two seasons, winning 27-17 last year. 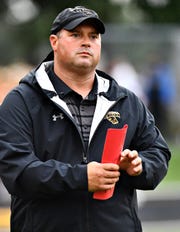 ►West York (0-2) at Lampeter-Strasburg (2-0): The Bulldogs are hunting for their first win, while the Pioneers are hoping to stay perfect. Despite star skill players on offense, such as Ay’Jaun Marshall and Andrew LaManna, West York has scored only 28 points in its first two games vs. Central York and Shippensburg. The Pioneers, meanwhile, have defeated Spring Grove and Penn Manor to start their season. The two teams didn’t play each other last season.

►York Suburban (0-2) at East Pennsboro (0-2): The Trojans may have welcomed newcomers Dr. Jekyll and Mr. Hyde to the squad this season, because their first two games tell completely different stories. Suburban lost a one-score game to defending D-III co-champion York Catholic in Week Zero, only to follow that up with a 62-0 road loss to Delone Catholic last week. The Trojans travel to East Pennsboro to take on a Panthers team that has lost one-possession games to Northern York and Red Land.

►Bermudian Springs (2-0) at Shippensburg (2-0): For the third straight week, the Greyhounds are taking on a Y-A team. This week, Shippensburg hosts the Eagles in a match-up of undefeated squads. Shippensburg has taken down Dover and West York in one-score games, while Bermudian has beaten New Oxford and Boiling Springs. Shippensburg beat the Eagles 33-20 last season.

►Delone Catholic (2-0) at Steel-High (2-0): This match-up is one of the most intriguing in District 3. Two high-flying offenses will go at it Friday. The Squires defeated Trinity 47-7 in Week Zero, and somehow improved on that performance last week, beating Suburban by 62 points. The Steamrollers’ defense hasn’t been as dominant as Delone’s, but the offense has been. Steel-High has scored 98 points in its wins against Newport and Biglerville. 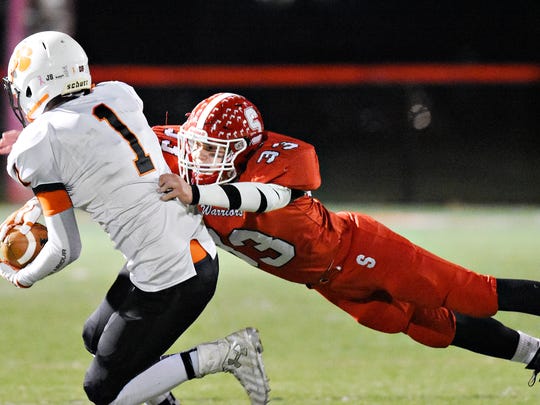 ►Fairfield (0-1) at James Buchanan (1-1): The Green Knights have won this nonleague game by large margins each of the last three seasons, but this year could be different. Fairfield barely has enough players for a varsity team, while the Rockets already have a win on the season. James Buchanan defeated York Tech 32-8 in Week Zero before being shut out vs. Big Spring last week.

►Greencastle (1-1) at Hanover (0-2): The Nighthawks started their season with games against Y-A Division II foes Susquehannock and Eastern York, losing each game by more than 20 points. Meanwhile, the Blue Devils were crushed by Chambersburg to begin the season and won by 35 points last week vs. Camp Hill. The two teams didn’t play each other last year.

►York Tech (0-2) at Schuylkill Valley (0-2): While both squads in this game are winless, the stories behind the records are significantly different. The Spartans lost by a combined 73 points to James Buchanan and West Perry, while the Panthers lost by 19 points to Upper Dauphin and by three points to Twin Valley. The two squads didn’t face off last year.