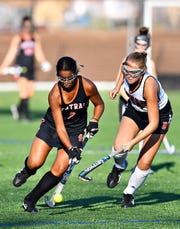 Central York's Victoria Whitehead, left, had 22 goals and eight assists during her sophomore season in 2019. (Photo: The York Dispatch)

Victoria Whitehead is just a sophomore and Kelsey Felix is only a junior, but both players are already considered among the state’s best high school field hockey players.

Whitehead, a Central York High School standout, was recently named a first-team Class 3-A all-state performer by the Pennsylvania High School Field Hockey Coaches Association. Felix, a star goalie for Eastern York, was a first-team selection in Class 2-A.

They are the only two York-Adams League players to capture first-team accolades.

Whitehead: Whitehead has been a force since the moment she stepped onto the field as a freshman, when she had 16 goals and six assists for the Panthers.

As a sophomore, she was even more productive, with 22 goals and eights assists. She was a major reason that Central captured the program’s first-ever league tournament championship. The Panthers won Y-A D-I and finished at 14-8 overall.

Livingston said Whitehead didn’t sit on her laurels after her standout freshman campaign.

“Her stick work was pretty decent as a freshman,” Livingston said of the Y-A D-I Player of the Year. “I think that she did improve upon that this year, which makes her pretty tough to defend.”

Felix: Felix, meanwhile, garnered national attention for her play earlier this year when she was named to the under-17 national squad. She had already been rated one of the top 50 recruits in the nation for the Class of 2021 by Max Field Hockey.

Her mother, Steph Felix, is also her head coach at Eastern York.

"She is quick, has size (5 feet, 9 inches tall), sees the ball well, is able to read the play in front of her and communicates effectively with her defense to help position them," Steph Felix said earlier this year.

Felix was an all-state honorable mention pick in 2018.

Apa and Crouse: Apa and Crouse, meanwhile, have already committed to play college field hockey at the NCAA Division I level.

Apa, a senior, is headed to Bucknell, while Crouse, a sophomore, has committed to Duke. Both were Mid-Penn first-team all-star selections at forward, with Crouse recognized in the Capital Division and Apa honored in the Keystone Division.