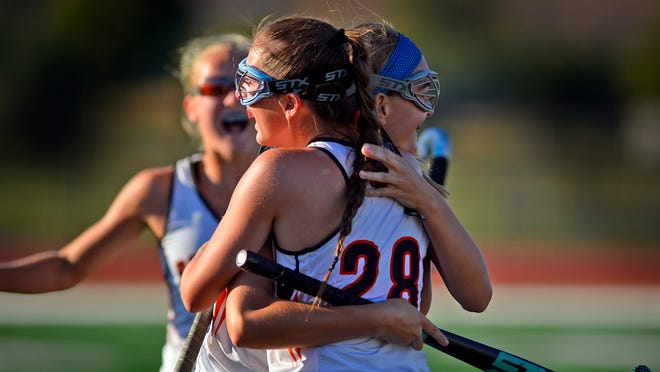 EMIGSVILLE — Setting goals is nothing unusual in high school sports.

There are the standard ones, such as winning division, league, district and state titles.

Not every team’s goals are identical, however. Teams often have goals that are specific to them and their situations. Accomplishing those goals can be even more satisfying than reaching standard goals.

That was the case for the Central York field hockey squad on Monday, Oct. 2.

Taking on the most acclaimed program in York-Adams League field hockey history, the Panthers had a chance to do something that hasn’t happened recently, if ever, for Central.

After defeating the Dallastown Wildcats a few weeks ago, coach Lori Livingston’s crew was aiming to check off one of the "other" goals on their collective list — beating Dallastown twice in the same season.

Behind a big three-point game by Kyra Heap (one goal, two assists), the Panthers were all smiles after walking off the field with a 3-1 victory over the Wildcats.

“Definitely,” a smiling Heap said in response to a question about whether or not Monday’s contest was the biggest game of the year. “And we wanted them even more because their coach said that we only play defense, so we went out there and beat them by two.”

Heap, one of nine juniors on the roster, put her team ahead midway through the first half with a nifty goal. Dallastown’s Olivia Jackson tied it about six minutes later, which is how things remained until midway through the second half.

That’s when Heap found teammate Emily Kurland for the eventual game-winning marker with 14 minutes remaining. For good measure, Heap found Mikalya Sommer in the circle with just more than six minutes left on the clock. Sommer took a big swing, which resulted in her shot zooming past the Dallastown goalie to all but put the game away.

While Heap was the hero Monday, it was teammate Bree Craley who couldn’t wait to get back to the locker room for an important bit of business. With several players surrounding Livingston after the game, Craley made her priorities clear.

“She wanted to go into the locker room to check off that we beat Dallastown twice,” Heap said. “Since my freshman year we had never beaten Dallastown, so we had to go and cross it off.”

What was the second priority?

“Eating,” Livingston said with a laugh. “Getting something to eat after games is always important with these girls.”

Unfinished business: While there’s little doubt that the Central girls were able to chow down feeling very satisfied after Monday’s victory, there remains some unfinished business down the road. Road contests against Red Lion on Wednesday, Oct. 4, and New Oxford on Thursday, Oct. 5, are similarly big hurdles. That’s because the Panthers could officially clinch the division title and a berth into the league playoffs with victories.

Just as importantly, however, are the power points that Livingston’s club needs to remain in the hunt for a District 3 Class 3-A playoff berth. The Panthers are squarely on the district bubble at No. 11, with only the top 10 teams qualifying.

It's quite possible that no York-Adams League team will be in the District 3 Class 3-A field come playoff time if the Panthers don’t win out.

Red Lion 1, Northern York 0: At Dillsburg, Kennedy Bratton broke a 0-0 tie, when she found the back of the net at the 3:56 mark of the second half to clinch the road victory for the Lions.

New Oxford 2, Spring Grove 1: At Spring Grove, Sara Parrish and Lauren Slonaker led the Colonials by each scoring one goal and adding one assist. For the Rockets, McKenna Clark found the back of the net at 20:06 of the second half. New Oxford won the JV match, 2-0.

Gettysburg 5, Kennard-Dale 3: At Fawn Grove, Jenna Soukaseum had a goal and an assist for K-D. Chloe Fornoff and Lindsay Dell also scored for the Rams.

South Western 3, Dover 1: At Dover, the Mustangs scored three unanswered goals to come back and defeat the Eagles. Dover’s only goal came from Caelin Burr. Dover won the JV match, 1-0.

Hanover 2, Northeastern 1 (OT): At Hanover, the Nighthawks scored in overtime to defeat the Bobcats. Avery Martz scored both goals for Hanover.