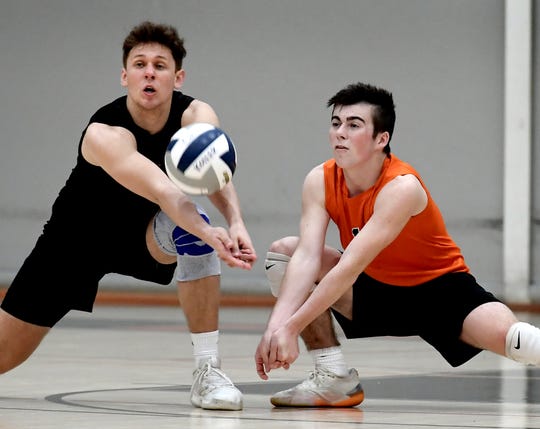 Nate Wilson always dreamed that he would be an NCAA Division I athlete.

The Northeastern High School volleyball standout, however, originally envisioned a basketball career before deciding to pursue a future in volleyball.

“Basketball is my first love,” Wilson said. “Walking away from it is going to be hard, but I am excited to see where I can go as a volleyball player.”

The 6-foot, 3-inch Wilson will be going to Ohio State to continue his career after he graduates from Northeastern in 2020. He announced his commitment to the university in May and can officially sign on Nov. 13.

Adding to his excitement about becoming a Buckeye is the fact that his father and high school coach, Matt Wilson, played volleyball at Ohio State from 1992 to 1995.

“It’s definitely a dream come true,” Nate Wilson said. “It has always been my dream to be a Buckeye. Knowing that I get to play at the same place my dad played is pretty awesome.”

EXCITED TO ANNOUNCE MY COMMITMENT TO THE ⭕️HIO STATE UNIVERSITY TO CONTINUE MY ACADEMIC AND ATHLETIC CAREER #GoBucks#O-H 🌰 pic.twitter.com/MKusUbY5xe

Born into a volleyball family: Nate Wilson was exposed to volleyball at an early age. As a child, he chased down volleyballs at his father’s practices and traveled with the team and even sat at the end of the bench with his own jersey.

Despite his constant contact with volleyball and his parents' background with the sport — his mother, Teresa Wilson, played volleyball at Indiana University of Pennsylvania and coached at Northeastern until 2009 — Nate Wilson’s focus was on basketball.

Matt and Teresa Wilson pleaded with their son to play volleyball early in his career, despite his love for basketball and year-round schedule on the court. Matt Wilson said they tried to get him to play both sports because they each offered him valuable lessons that would translate to the other. 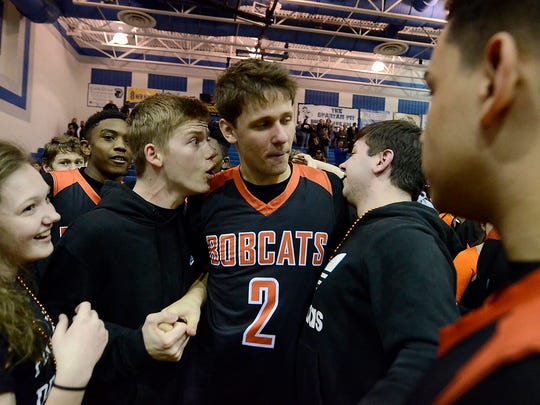 Northeastern's Nate Wilson, center, is surrounded by fans after the Bobcats beat Penncrest 63-60 in a PIAA second-round boys' basketball game in 2018. Wilson's first love is basketball, but he's chosen to play volleyball at Ohio State. (Photo: The York Dispatch)

“We had a very tough freshman and sophomore season,” Matt Wilson said. “We just felt it made a lot of sense to play multiple sports.”

Nate Wilson listened to his parents, and while he still had his eyes on a basketball future, a passion for volleyball grew inside of him.

Early in 2019, Nate Wilson approached his father for one of their regular conversations about his athletic future. This time, however, something was different, according to Matt Wilson.

“Everybody in my family loves volleyball,” Nate Wilson said. “I was always around it. I loved the sport and it was kind of like I had to play.”

The hardest part of the decision for Nate Wilson was telling his Amateur Athletic Union basketball coach, Scott Singer of Central PA Elite, that he wasn’t going to be able to play AAU basketball this summer, so he could focus on volleyball.

A dream come true: Then in April, Nate Wilson took his official visit to Ohio State and a family’s dream came true. With his father in the room, Nate Wilson received his offer from the Buckeyes and it was a moment the Wilson family won’t forget.

Thank you to @Coach_KJB and the rest of the Ohio State Volleyball coaching staff for an amazing visit this weekend! Go Bucks!! pic.twitter.com/8C7SQCrjj7

“It was probably one of the coolest things I have ever seen,” Matt Wilson said. “To see a young athlete whose dreams are about to be offered to him, not just a player, but your son. It was pretty emotional.”

When Nate Wilson gets to Columbus, Ohio, he will have a friendly face there to help him adjust. His older brother, Drew, recently finished his freshman year at Ohio State. Matt Wilson said the two brothers are best friends and are excited to end up at the same school again.

Drew Wilson also played volleyball at Northeastern and was an outside hitter and serve specialist, but he's not playing volleyball at Ohio State.

Nate Wilson will also join an Ohio State roster that already includes a former Bobcat standout in Reese Devilbiss, although the two players will likely never play together at OSU. Devilbiss is entering his senior year with the Buckeyes.

The best is yet to come: With his focus now on volleyball this summer, Nate Wilson said he can get even better, especially since he only started playing the sport in sixth grade.

“I am a young volleyball player at this level, I have a lot of room to grow,” Nate Wilson said. “I think I have a pretty high ceiling. I think this summer, I am going to make a huge jump.”

Matt Wilson said that his son will benefit from a national tournament this summer. In July, Nate Wilson will represent the Keystone Region in the 2019 USA Volleyball High Performance Championships in Fort Lauderdale, Florida, against some of the nation’s top players.

“He’s going to find out really quick where he measures up and what he needs to do to close that gap,” Matt Wilson said. “He has got to become the elite high school volleyball player in the state of Pennsylvania. I think he is close, but there are areas he needs to refine.”

Nate Wilson will "definitely" play one final basketball season for Northeastern before his focus turns to volleyball.

“I don’t want to walk away from the sport after making a commitment to the basketball team,” Nate Wilson said. “I want to play my senior year out with all my friends I have been playing with since I was young.”