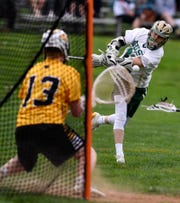 The attacker was named to 2019 All-LaxRecords All-America Third Team.

Hake was one of just three players from Pennsylvania named to the team and he was the only player from District 3 to be selected.

The other Pennsylvania players to be honored were Crestwood’s Anthony Caporuscio, Jr. and Penn Charter’s Gavin Tygh. Both of those players were first-team honorees.

According to All-LaxRecords, Hake finished his high school career No. 6 on Pennsylvania’s career goals list with 259. The Florida Tech recruit earned York-Adams League Offensive Player of the Year after scoring 145 points and helping York Catholic to a 19-3 overall record. His 350 career points place him 16th all-time in state history.